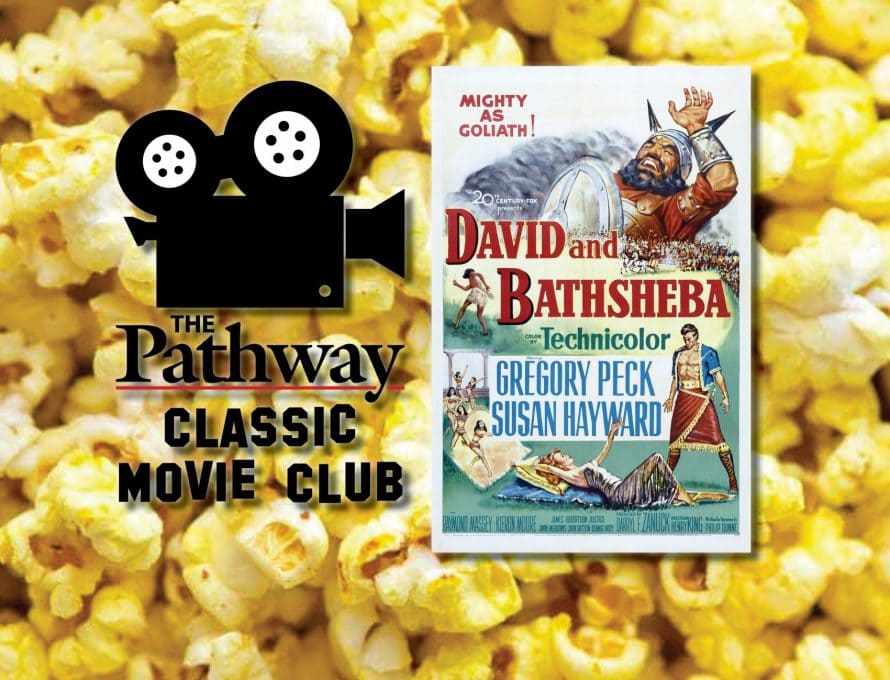 1951’s “David and Bathsheba” was a direct result of the success of Cecil B. DeMille’s “Samson and Delilah” two years prior. Hollywood icon Darryl F. Zanuck demanded his own biblical epic, and he certainly got one.

The story is smaller and more personal than many biblical “epics.” Though it shows flashbacks of David’s past exploits, this is a story about how a “man after God’s own” heart begins to unravel. Zanuck reportedly chose Gregory Peck for the role of David because he had a “biblical face.” I don’t know if that’s true, but Peck does a masterful job playing the king with the right mix of nuance, prestige, entitlement and regret.

Susan Hayward gives Bathsheba a fuller and more complex personality than one might expect. When their sins are discovered, it is she more than David who accepts the reality of their transgressions.

The portion of David’s life covered here takes place over just two chapters in 2 Samuel.  Much has been written in the era of #metoo about how David should be remembered not only as a man after God’s own heart but also as a rapist. I don’t know enough about the culture or language to glean any extra details from the biblical account regarding Bathsheba’s consent when summoned before the King of Israel. In the film, David makes a show of saying the right things and she openly says she intentionally tried to entice him and wants to be his wife. It’s interesting to think how this might be presented in a film released in 2020. Hollywood then was much more interested in telling a story of illicit passion than a story of sin. I have a feeling David would come off looking much worse in a remake.

Regardless of Bathsheba’s role and how this story should be interpreted, it’s painfully clear – both in the Bible and in this movie – that David is guilty of sin. He first sinned as he held his initial gaze on her, and that led to – at the very minimum – adultery, lying, murder, heartbreak, the deaths of his sons and eventually a divided kingdom. Indeed, as it says in 2 Samuel 11:27, “the Lord considered what David had done to be evil.” David truly was a man after God’s own heart, but he was also sinful after Adam’s own nature.

We get many scenes that come purely from the imagination and not 2 Samuel. Most of these have to do with David feeling like he doesn’t measure up to Saul’s legacy. The timeline is shifted to fit Hollywood’s structures. It even borrows one of Elijah’s prophesies for Nathan, lets us see David recite the 23rd Psalm, and imports a story or two from the New Testament. Sly references to David’s past experiences with his harp, Saul, Jonathan and Goliath appear on screen like little Easter eggs to those familiar with David’s life.

Unlike many of the biblical epics on our list, I’d never seen this movie before. I liked it. A lot. It shows how we can become comfortable in our own blatant sin. It shows there are consequences to sin, even after our repentance and God’s forgiveness. It shows that when we wake up and see how far we’ve wandered, He is still nearby. Peck in particular shows why he was Hollywood royalty. We can see the moment in Peck’s eyes when David sins; not just when he has Uriah killed, but when he chooses not to look away from the sight of Bathsheba.

Yes. The bathing scene takes place either at a distance so as to be blurry, or behind a screen. As a whole, the movie is more modest than many of its classic peers.