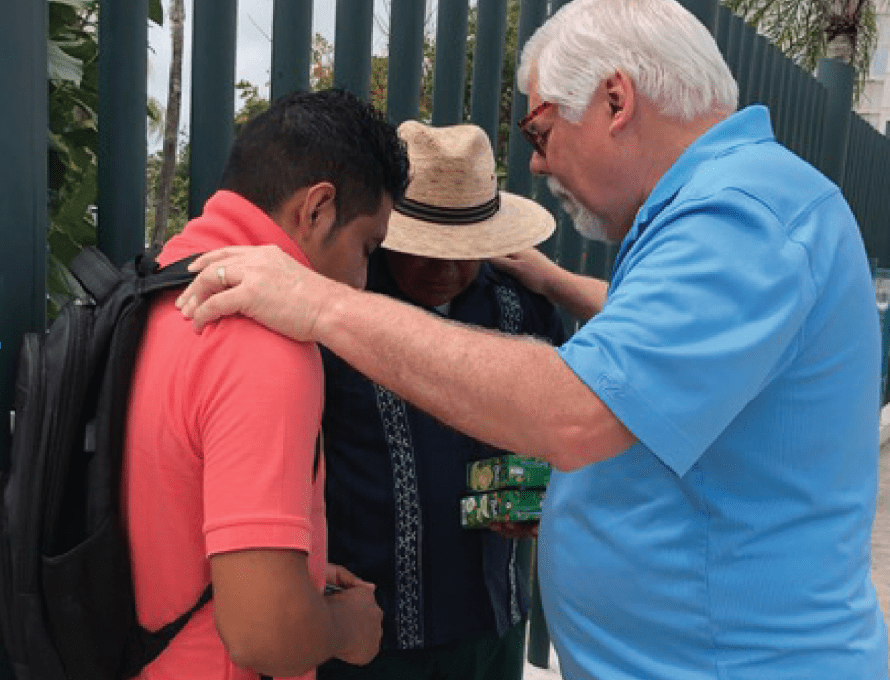 MEXICO – Brent Campbell outside la local hospital in Mexico praying for locals as they wait to go to hospital for treatment. Photos courtesy of Brent Campbell

TROY – Brent Campbell was an insurance agent and a deacon in a Baptist church for much of his adult life. But the last twelve years he had a second career as the director of missions for the Twin Rivers Baptist Association, Wright City. Campbell retired in February.

It was not the usual path for a director of missions. Campbell grew up in Troy, went to “Mizzou,” got married to Diane and got established in the insurance business. He was an agent for Shelter and later for Allstate. But in 2007, after he and Diane sent their last son off to college, he was able to take early retirement. Or so he thought.

The plan was to do mission work and help with a few projects with some young people they had helped mentor in their home church, First Baptist Church of Troy where he was a deacon. They thought about doing mission work in Alaska.

But the director of missions position in Twin Rivers opened up and he was asked to be the interim DOM and later to be permanent. About ten years earlier, the association had been formed with the merger of two previous associations, Cuivre and Bear Creek. Currently there are 41 member churches in the association.

Asked what he thought his accomplishments in twelve years are, Campbell paused a moment and said “The usual: churches working together, camps….” And then he said, “But the thing I am most excited about would be the church planting and the mission trips.”

He began rattling off locations where he and Twin Rivers churches and members have visited to do mission work: Colorado, Chicago, Washington DC, Panama and Israel. There were about 30 trips taken in 12 years.

Campbell said he always tried to help smaller churches get engaged in the trips, even if they could only send two to four people. They would join with others to make up a team.

In Israel they served at a 75-acre camp called Baptist VIllage as well as a place called the Jerusalem Prayer Center. Both of these locations have connections to the International Mission Board and rely on volunteers for some of their staffing. They refer to it as “going over to help our friends.” He and Diane spent a month there last year hosting visitors and ministering to the staff of the center.

The church planting in the Twin Rivers Association region, which is just north of the St. Louis metro area, was another point of excitement as Campbell recalled his tenure. He said the churches in the association have started eight new churches in Moscow Mills, Wentzville, O’Fallon, Winfield and St. Charles.

Diane Campbell just retired as a school teacher and so the next stage of life for the Campbells will be that they are open for more mission trips. They are planning to go to Turkey next year if travel out of country is allowed by that time.

Asked what his biggest challenges were, Campbell replied, “working with small churches (needing pastors). The turnover of pastors in smaller churches is rapid and they need help when that happens.” He did note they have experienced very little church conflict and for that he is grateful.

As he leaves the position he offered this advice: “I am big on everybody is a ‘called Christian.”

He added “Let’s wear out not rust out.” He encouraged people to “get involved.” He recalled one of his last mission trips they took a couple that had celebrated 60 years of marriage and were doing missions work. That is what is most important, he added.

So for Brent Campbell, retirement from being a director of missions means a lot more time for missions.