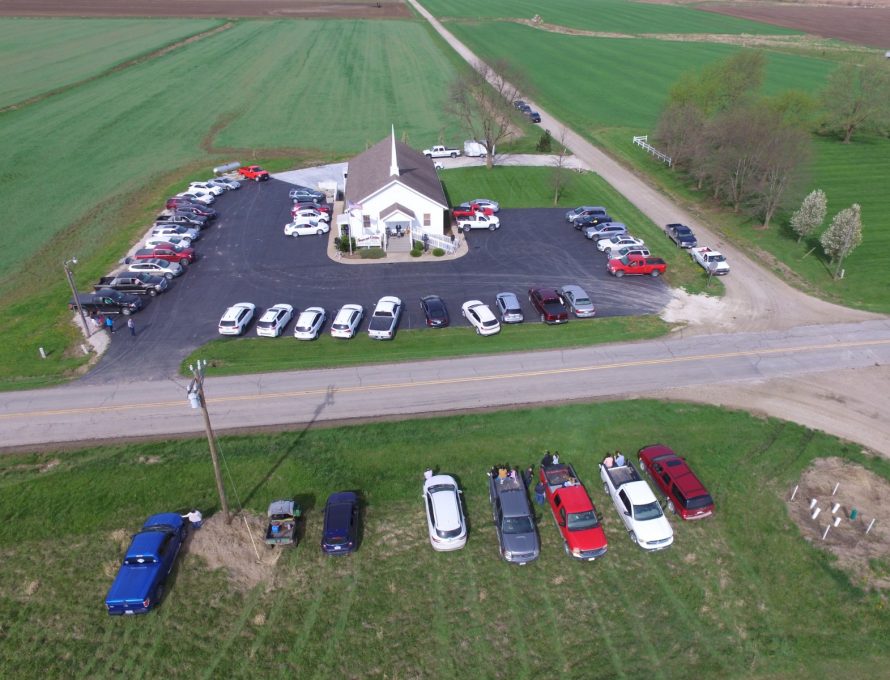 VANDALIA – The Spencer Creek Baptist Church here holds a drive-in worship service on Easter Sunday. While many churches are doing such services successfully, some have received push-back from local authorities. Photos courtesy of Kurt Childs

HOUSTON – Mike Walker, director of missions for Texas County Association saw that churches were holding drive-in worship services in parking lots as an alternative to meeting in church buildings during the pandemic crisis.  So he and his pastors took it a step further and decided to have a drive-in revival with a series of preachers and musicians holding a county-wide crusade May 3-6.  And they had the benefit of having a drive-in movie theater to use.

The Houston area drive-in is one of about a dozen theaters still operating in Missouri.  This style of theater used to be pretty common 30-40 years ago.

Walker said, “God is doing amazing things. This is a result of two laymen praying (six-feet apart, waiting in a cash register line at a lumber yard), and it took God less than 90 minutes to bring it together and provide funding. It took much longer to get a flyer ready.”  The flyer indicates there will be music and a different area preacher each of the evenings of the drive-in revival.

Many churches have arranged to have low-power FM radio transmitters available and they have held services in church parking lots in various places in Missouri.  Some could not obtain the FM transmitters so they set up a sound system in the church entry way directed toward assembled cars in the parking lot.

Of course, many churches in Missouri and all over the nation have found that broadcasting their worship services on Facebook Live or YouTube or some other online forum is an alternative to meeting live, in person for worship.

New Beginnings Fellowship in Hollister has been doing online services for several weeks. But they held a drive-in service on Easter Sunday with an estimated 450 attenders, which is a little higher than their normal attendance.

They had notified city officials of their intent and had heard that Missouri Governor Mike Parson had indicated drive-in services would be acceptable if social distancing was practiced.  Then during a follow-up report, New Beginnings Connection Pastor Dennis Webb had a conversation with the Hollister city manager and was told, “We really wish you wouldn’t do it again.”

Senior Pastor Matthew Costner, who has only been with the church for about a month, said, “It put us in a difficult position in that we wanted to make all these new connections by having the worship, but on the other hand we did not want to offend local officials.

“I consulted some attorney friends and was advised we would not be breaking the law,” he added.

But Webb also heard from the city officials, who said that, if they did hold the service and anyone came down with the COVID-19 virus, there would be a mandatory quarantine imposed on all who attended.  So they decided to act in the spirit of Jesus – “If anyone asks for your shirt, give him your cloak” – and they held online worship services the next Sunday.

Then, on April 20, the church received a call from the city administrator to inform them that the Taney County COVID-19 task force had approved them for a drive in church format.

Director of Missions for the Tri County Baptist Association, Phillip Shuford said, “The question is, constitutionally, can the officials have a tighter restriction (for this) than a fast food stand or a liquor store?”

Shuford preached at a drive-in worship service in the town of Blue Eye, on the Arkansas border on Easter Sunday and said there was a real sense of “koinonia” fellowship there. The estimated 40 people attending honked their horns for “amens.”  He was filling in for Pastor Jason Moore who was under a mandatory 14-day quarantine by local health officials imposed after he visited a hospital emergency room for a non-related health issue.  He said the health department called every day to verify he was staying at home, although his wife and daughter, living in the same home, were not quarantined.

There are a lot of issues up for discussion on whether these officials can officially forbid or discourage churches from assembling together in a way that does practice the “social distancing” that has been mandated.

Shuford said he is finding most of the jurisdictions that are going further than the state government guidelines are in the smaller towns and suburban communities in his association. He is finding in the rural towns and open country locations, no one is receiving any pushback from the government on holding drive-in worship services.

In an April 20 article in “The Federalist” magazine, Ashley Bateman reported that a “Kentucky district court granted On Fire Christian Center a temporary restraining order against Mayor Greg Fischer and the City of. Louisville.  The mayor had employed local law enforcement to shut down the church’s drive in services. The courts called it an overreach.”

Other reports of drive-in church worship services being contested have been found in Franklin County, near St. Louis and in Butler, which is located in Bates County in southwest Missouri.