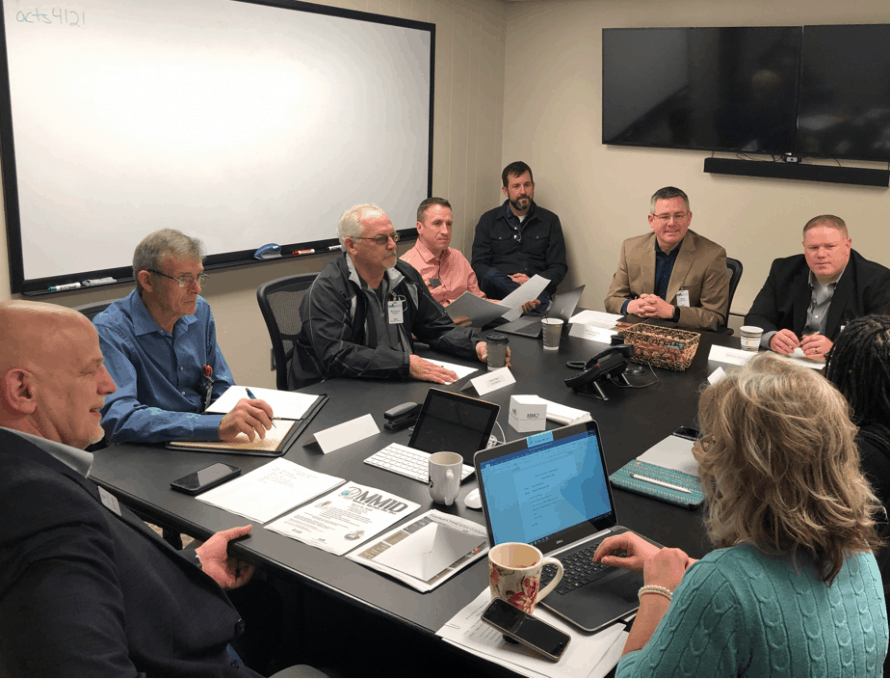 JEFFERSON CITY – Members of the Missouri Baptist Convention Executive Board hear reports from members of the MBC’s Multiplying Churches team during their board meeting here, March 3. Pathway photo by Benjamin Hawkins

JEFFERSON CITY – During their March 3 meeting here, Missouri Baptist Convention (MBC) executive board members rescinded a previous board decision that prohibited MBC staff from using the Windermere Baptist Conference Center (WBCC). The board also encouraged churches to consider using the campground for ministry.

The board’s decision comes nearly three months after the WBCC was restored to the Missouri Baptist family, after a subsidiary of the Missouri Baptist Foundation (MBF) last December bought the campground off the Camden County Courthouse following a “non-judicial foreclosure.”

The board once again recommended a 2021 CP budget of $15 million. The budget sets aside 5 percent of the total CP giving for “shared expenses,” which are allocated for annuity protections and The Pathway. From the remaining CP funds, 36.84 percent are allocated for MBC missions and ministries and 23.16 percent for Missouri Baptist entities, including the Missouri Baptist Children’s Home, The Baptist Home, the MBF, Southwest Baptist University, Hannibal-LaGrange University and Missouri Baptist University. The remaining 40 percent is allocated for Southern Baptist Convention causes. Any CP receipts above the 2020 budgetary goal will be split evenly between MBC and SBC ministries.

The MBC also set allocations for the anticipated 2020 MMO receipts of $725,000, which will help fund the MBC’s various ministries in 2021.

MBC President Jeremy Muniz appointed eight people to a new racial reconciliation task force, though he said some others might be appointed to the task force later in the year. He appointed MBC first vice president Jon Nelson, pastor of Soma Community Church, Jefferson City, to chair the task force.

• approved a list of potential exhibitors for the 2020 MBC annual meeting;

• recommended that the Social Screening Policy section of the MBC Investment Policy be changed to read, “The MBC employs specific moral screening criteria designed to exercise responsible stewardship consistent with Christian moral and ethical principles.  As a result, the MBC avoids investments in companies whose revenue is derived from principal business activities of tobacco, alcohol, gaming, pornography, abortion or fetal tissue research. The MBC understands that investments in alternative asset classes, such as hedge funds, private equity, private natural resources, and private real estate are not screened”;

• approved the distribution for the underspend of approximately $350,000 by the MBC, to be used for refreshing the MBC’s Ministry Buckets, for providing a mid-year bonus to Executive Board staff and for renovations on the Baptist Building’s seventh floor;

• authorized the Executive Director to complete the necessary documents to keep the Whitehead Law Firm as general counsel for the MBC;

• authorized the Executive Director to extend for six months the services of Mary Valloni, a building campaign consultant who is helping the MBC raise funds for a new Baptist Student Union building in Springfield; and