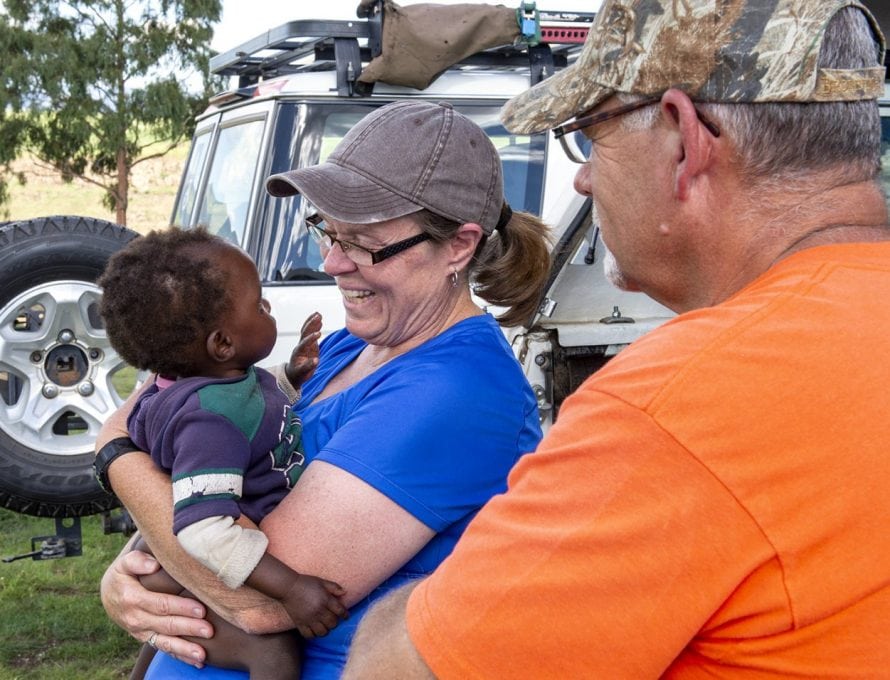 LESOTHO – Teresa (left) and her husband, Jim (right), have lived among the Basotho for 11 years. They frequently hold clinics where Teresa can offer medical treatment and Jim can preach. IMB Photo

LESOTHO (BP) – International Mission Board missionary Teresa Flora is praising God today for physical and spiritual transformation in the life of a family in Southern Africa.

Mosilisi, an 11-year-old girl, lives in a high mountain village in Lesotho. She is Basotho, and her people group remains unreached. She lives with her widowed mother, two school age siblings and her twin baby brothers.

Teresa, who is a missionary nurse, met Mosilisi about four years ago when she held a clinic in a neighboring village. Teresa, her husband Jim and their three daughters have lived among the Basotho for 11 years. They frequently hold clinics where Teresa can offer medical treatment and Jim can preach.

Jim and Teresa served in various churches in Missouri (including at Hamlin Memorial Baptist Church, Springfield) and Arkansas before coming to the field. They have six children and eight grandchildren. Their ministry is heavily focused on U.S. partnerships, where they train U.S. churches to “be the missionary” to a valley of villages. Mosilisi lives in one of those villages, untouched by the gospel.

Seeking help for a skin condition that had given her back a gray, scaly appearance, Mosilisi attended Teresa’s clinic. While Teresa had encountered this disease only once before, she was able to identify Mosilisi’s condition. The disease is called Ichthyosis Vulgaris. The word, Ichthyosis, comes from the ancient Greek for “fish.” This particular condition is given this name because it causes the skin to become thick, dry or scaly. Because of her condition, Mosilisi is unable to shed dead skin cells. If she does not receive proper care, her dead skin cells will accumulate and her skin will take on the appearance of elephant skin.

After this initial interaction with Mosilisi, Teresa researched and consulted with other medical professionals to provide Mosilisi with appropriate treatment. The pharmacist’s recommendation was lactic acid – more specifically, goat’s milk. Teresa and her family bought Mosilisi two goats. Mosilisi was instructed to milk the goat, dissolve an aspirin in the milk and then bathe with it. This treatment proved effective until Mosilisi’s family ran out of food and was forced to eat their only method for treating Mosiili’s condition.

Three years after this initial interaction, Teresa saw Mosilisi at the new church plant near her village of Ha Mantsi. When Mosilisi recognized her, Teresa asked if she could see Mosilisi’s skin. Much to Teresa’s dismay, Mosilisi’s skin had not improved.

In order to aggressively treat the condition, Teresa made arrangements for Mosilisi and her mother to join the Flora family in their home for two weeks. She was determined to offer Mosilisi relief. Teresa enlisted the help of friends and churches back in the States to equip them with the necessary supplies for the oil baths and body scrubbings Mosilisi would need three times each day. In an effort to loosen the dead skin as she bathed, Jim even constructed a whirlpool for the bathtub.

“What a fun day that was,” said Teresa. When Teresa handed Mosilisi’s mom the tube that pushed air into the tub to create the whirlpool, she wasn’t prepared for the force of air coming from the tube.

“When she put it in the water the bathroom experienced its own kind of rainstorm. After the shock of the impromptu rainstorm wore off, our home was filled with laughter. Probably the most Mosilisi’s family had laughed in a long time,” said Teresa.

Following the bath, Teresa applied a heavy moisturizer on Mosilisi’s back and wrapped her in a trash bag to contain the moisture until the next bath time.

Realizing an opportunity to connect with Mosilisi’s mom while Mosilisi soaked in her bath, Teresa invited the mom to come and join them in the bathroom. Using a dry erase marker, Teresa began to illustrate the Gospel message on the bathroom mirror. When Jim had traveled to her village on horseback years ago, he had led Mosilisi’s mother to Christ. After much teaching and explanation, Teresa believed this mother had truly accepted Christ but struggled to live for Him. She needed discipleship. Between Teresa, her house helper who is a believer and a national pastor who was staying at the Flora house recovering from surgery, they led her through all 10 of the discipleship lessons they use with new believers.

“I wish you could have seen it,” said Teresa. “What a transformation! The mother was reminded of her hope in Christ Jesus. She now knew how to live for Him.”

In addition to the encouraging time of discipleship, the Flora family had led two women, traveling broom sellers from a distant village, to Christ only the week before. After one of Mosilisi’s morning baths, all of those in the Flora house climbed into their truck and journeyed to the nearby river where the two women were baptized.

Teresa and a vision team from Pine Terrace Baptist Church near Pensacola, Fla., visited Mosilisi and her mother Nov. 19, 2019. A team member shared the evangelical tool “2 Kingdoms” with 11-year-old Mosilisi.

By God’s grace, Mosilisi responded to the gospel presentation and accepted Christ as her Lord and Savior. Now Mosilisi is experiencing spiritual r