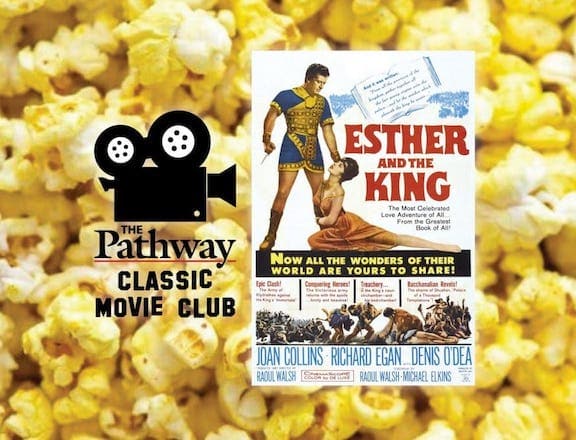 EDITOR’S NOTE: Once a month in 2020, The Pathway will examine a classic Hollywood retelling of a biblical story, compare it to the actual Word of God, and discuss its artistic merits. Viewed critically from a biblical worldview, the stretch of biblical epics from the 1950s and 60s can prompt discussion and appreciation for God’s truly magnificent story. To see all the Movie Club entries, visit www.mbcpathway.com/movieclub.

Even aside from its utility and worth as part of Scripture, Esther’s tale is a wonderful one. Much of the popular retellings of the Old Testament focus only on the macho: hordes of animals here, giants getting smacked in the head with slingshots there, walls that come a-tumblin’ down, etc. Yet here is an example of God’s providence and mercy expressed through a love story… of sorts.

“Esther and the King” (1960) definitely doubles down on this love story angle. Esther (played by Joan Collins, later of “Dynasty” fame), has a choice to flee the court of King Ahasuerus (Richard Egan), yet opts to stay because she truly loves him. This is complicated by her invented-for-the-movie engagement to a Jewish soldier. Meanwhile, Esther’s uncle Mordecai (Denis O’Dea) squares off in a battle of wits against the evil Haman (Sergio Fantoni), who wishes to destroy the Jewish people.

Collins is, of course, beautiful as Esther, but she’s not given time or plot to develop a real sense of character. Mordecai’s position in the kingdom is tweaked and Haman is boosted to even more of a mustache-twirling villain. I came away wanting to see more of Esther and her relationship with the king.

Things get rearranged (like almost any book-to-film adaptation) but it’s clear the screenwriters at least read the text of Esther more than once. That’s admittedly a low bar, but it’s something. The basic elements are there and the takeaway remains: God used Esther to save His people.

The Bible never explains Esther’s feelings toward the king, and I’ll leave biblical scholars with better Hebrew than I (which to say, any Hebrew at all) to debate whether or not this truly is a “love story.” The fact that it’s not explicitly spelled out for us leads me to conclude this account is much more about God’s provision and care for His people than the romantic entanglements of two people.

In both the movie and the biblical text, Haman is laser-focused on using the law eliminating the Jews who worship the one true God instead of the gods approved by the state. We must be careful of crafting theology from narrative, but our culture and increasingly our government labels the public exercise of our faith offensive and unacceptable. More than 2,500 years ago, God used Esther to influence less-than-God-honoring leaders to bring about unequivocal good and to protect His people; may we be discerning and courageous like Esther to stand up for God’s will when He calls.

As much as I enjoy the story of Esther, this is a B- or C-level movie. It’s been compared to a spaghetti western and not in a good way.

Not as much as you might think. While Esther is modest and tasteful in her dress and actions, former Queen Vashti and the rest of the harem wear (or in some cases don’t wear) costumes a lot more revealing and sensual than I expected to see in a biblical story. If an episode of Mister Rogers is a 1 and this year’s Super Bowl Halftime Show is a 10, those scenes were an 8.5.