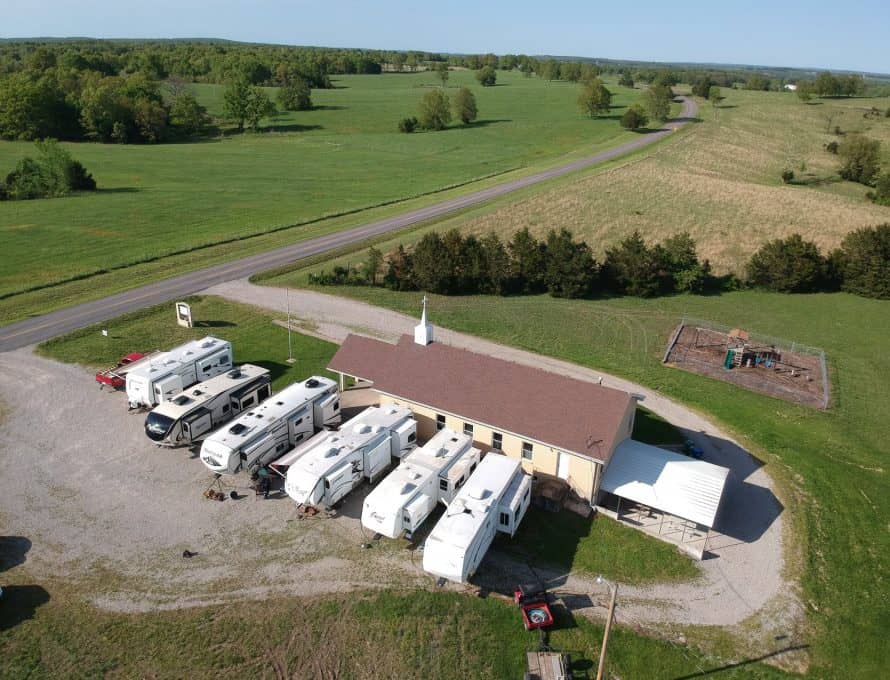 LEBANON – Campers are parked beside the building of Orla Baptist Church, outside Lebanon, where Missouri Baptist Campers on Mission volunteers helped to do some remodeling on the church’s facilities. Photo submitted

One of the churches the Campers have served is Orla Baptist outside of Lebanon. Soon after Pastor Jordan Witt was called to Orla two years ago, he knew the church building needed a remodel. It was erected in 1971, and much of it was still original.

“There were a lot of things that needed attention,” Witt said.

The church was in agreement and had voted even before Witt came to address several aesthetic and structural issues. But as often happens, the vote had not led to concrete action, and monetary concerns led the church to table the issue.

The Campers worked on several projects, including electrical work, sheetrock, painting, and finish work. The project included a remodel of the sanctuary and the addition of a bathroom on the church’s main level.

Not only did Campers work in the building, but several lady Campers spent their time sewing quilts. The finished quilts were then given to local non-profit organizations.

During the mini-rallies, the host church provides meals for those who are serving. Dorothy Deckard, a long-time member of Orla Baptist Church, was one who helped cook and serve.

“We furnished a meal for them every night at the church,” she said.

“They did an amazing job and they were amazing people.”

Her Pastor agreed. Not only did the workers excel in workmanship, but their lives and attitude reflected Christ, according to Witt.

“You can feel Christ’s love through those people. The joy that is in their heart is just amazing,” he said.

Witt estimated that the Campers saved the church tens of thousands of dollars.

Roger Marshall, a retired Missouri Baptist pastor who serves with the Campers, noted that they have done similar projects for churches and camps across the state.

“So many people don’t know it is available to their churches and how much they could benefit from it,” Marshall said.

“Someone once said to me, ‘It’s one of the best kept secrets in the state of Missouri.’”

The Campers welcome volunteers to join their ranks. They also welcome calls from churches to determine how the Campers can help. If you are interested in learning more about either volunteering or seeing if the Campers can serve your church, you can visit www.missouricampersonmission.com or contact them through email at missouricom2018@gmail.com.