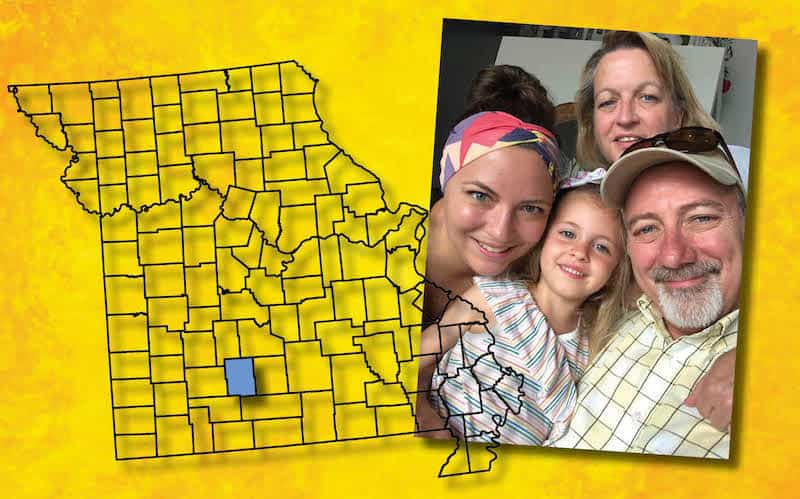 MARSHFIELD – Mitch Fisher is involved in two ministries. He is the director of missions for the Webster County Baptist Association and he also is a bereavement chaplain with CoxHealth Hospice (formerly known as Oxford HealthCare Hospice). With these two ministries he is able to work full time, serving each part time. He manages to divide up his time with each entity having flexible hours. But he says the biggest struggle is not working too much.

Like many Missouri directors of missions (DOM), the association finds it challenging to maintain a full-time position with salary and benefits. More and more associations are giving their DOMs the freedom to seek other part-time work.

Fisher says the association office is open on Monday through Wednesday, and there is a part-time secretary those days. His hospice work is scheduled around his other days of the week, and sometimes he trades out times to weave in and out of daytime hours for each organization.

Fisher says he usually spends about 30 hours each week engaged in each of the ministries.

He says that living in nearby Springfield, he is able to get some time with his family on Fridays, where he and his wife, Becky, are able to get together with their daughter and grandchildren for what they call “fancy coffee Fridays” at coffee shops there.

Webster County association has 25 member churches. The towns of Marshfield, Rogersville and Seymour all have Baptist churches and there are several rural churches as well. Some of the town churches have as many as 300 attenders and the country churches may have 15-20 attenders.

Fisher said the Webster County people are “independent, self sufficient and proud of their heritage.” He said, “People say ‘We are ok going into Springfield, but we like to go back home to our area.”

The association sponsors two summer camps for children and teens. They have an annual sportsman’s event to reach out to the archery community. The archers compete in bow shooting with three ranges and 36 targets set up. They use this event to share the gospel with the hunters and their families. It is a big draw in their community with over $7,000 in gift cards and prizes awarded, some of which are sponsored by local community businesses as well as the association.

The association also has an annual fishing derby which attracts up to 300 kids. They go on mission trips, this year going to Charleston, Missouri and Puerto Rico. And they provide refreshments at booths during the Webster County Fair and the Seymour Apple Festival.

The chaplain part of his work is primarily related to bereavement ministry with those who have recently lost loved ones. The CoxHealth bereavement services are directed at those “who have suffered a loss, and professional staff maintain contact to help families work through the grief process.”

Fisher says he works alongside a team of professionals with hospice patients and family members. There are hospice chaplains, social workers and nurses who work primarily with the patients during their illness and approaching death. After the death of a patient, Fisher will make contact with the family and do an in-home visit to assess spiritual concerns and assist with the survivor’s grieving process and readjustment to their new reality.

He has the opportunity to help them identify their world view and religious preferences.

“We look for prominent markers of the person’s life. We observe their lawns, flowers, pets, home decor and get a feel for their interests. We help them by asking questions about where they are, what they are going through, their church home and their prayer concerns.”

He continued, “Our best quality caregivers we have in our organization are the people who can relate to the people best whether they live in an upscale home or a trailer. We don’t go in with any pre-conceived notions. There are no expectations of a church relationship or spiritual condition, but if we are invited to do so we ask ‘How are you doing spiritually?”

Fisher said he is able to network with local churches if the family members desire. This ministry seems to fit Fisher’s personality as he comes across as very genuine and compassionate.

He and Becky (a retired schoolteacher) seem to have a good ministry niche carved out in Southwest Missouri. His ministry with the association and the hospice seem to complement each other.