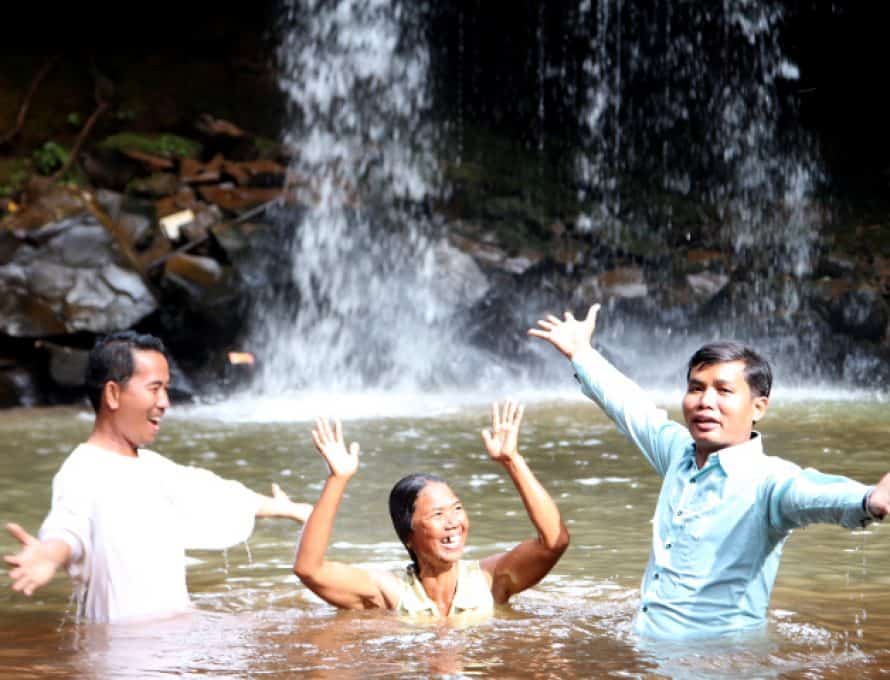 A new believer in Southeast Asia celebrates as she is baptized. IMB workers William and Nancy Potter (names changed) had the opportunity to witness baptisms of third-generation believers in the Southeast Asian church they’ve been a part of for many years. (IMB Photo)

EDITOR’S NOTE: This article is written by Caroline Anderson, a writer who serves with IMB in Central Asia.

SOUTHEAST ASIA—William and Nancy Potter,* IMB workers who serve in Southeast Asia,  love hearing about baptisms of people they don’t know. News of strangers being baptized means there has been generational growth of Christians in their area.

The “generational growth” — people who lead people, who then lead other people, to Christ — first began 18 years ago when they met Ary Keo* and her husband Chann.* As the Potters discipled the couple and cast a vision for church planting, the Lord gave Ary and Chann a heart to take the gospel to an area eight hours away.

The Keos’ ministry was slow at first, Nancy reported. It took eight years to see the first church start, then another few years to start a second church.

Now the Keos are discipling and baptizing believers who do the same with other believers. Approximately 60 Christians recently were baptized in one part of the country.

The Potters are witnessing a discipling domino effect: they discipled the Keos, and members of their community have gone on to disciple other communities. Now church growth is expanding far beyond their reach. Their vision is to see churches start in 10,000 unreached villages across the nation.

The Potters also recently witnessed a third generation of believers be baptized in a church where they’ve been connected for many years.

The Potters are praying for more stories of believers they haven’t personally met because this means the gospel is spreading throughout their country. They hope soon there will be a day when everyone in their Southeast Asian nation has heard the name of Jesus.

Your gifts through the Cooperative Program and the Lottie Moon Christmas Offering® support Southern Baptists living alongside Southeast Asian Christians to help them learn how to plant healthy churches and expand their gospel witness. Thank you for giving.