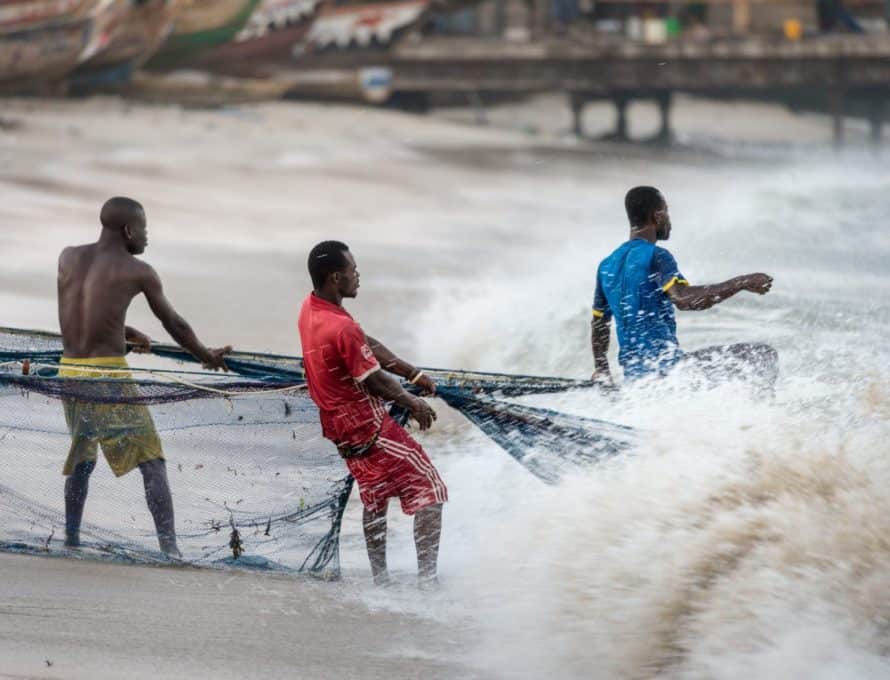 Fishermen in Sub-Saharan Africa pull in their nets to haul in the catch of the day. Fisherman such as these benefit from programs at “The Well,” a rehabilitation center founded by Southern Baptist missionaries. (IMB Photo)

EDITOR’S NOTE: Lucy Campbell, who wrote this article, is a Journeyman serving in Eastern Europe.

SUB-SAHARAN AFRICA — “I believe this. I want to be baptized.” Mark* was just one of the men recovering from heroin addiction at “The Well,” a rehabilitation center founded by Southern Baptist missionaries. His new start in recovery led to his new beginning in eternal life.

Located inside a concrete building formerly frequented by heroin addicts, “The Well” serves those who live in the surrounding fishing villages. The name was inspired by the story in John 4 of the Samaritan woman, whose encounter with Jesus at the well not only changed her life, but also the lives of those in her town.

After being baptized and completing the program, Mark returned home to his village. Typically, when addicts return home, it can be easy for them to slip back into old habits, and it is hard to maintain contact with their fellow classmates after they finish the program. But returning home also presents opportunities for relationships to be restored, broken families to be mended, and villages to be introduced to the gospel.

Awhile after Mark went home, missionaries from the center bumped into him. They began a discipleship group in his village and challenged the men to read through the gospel of John. Even one of the program leaders was challenged by seeing how Mark understood and applied what he had read.

Pray that Mark will lead people in his village to Christ so they may say, as people in the Samaritan’s village once said, “We no longer believe because of what you said, for we have heard for ourselves and know that this really is the Savior of the world” (John 4:42, ESV). Also, pray Southern Baptist missionaries and their national partners will have opportunities to follow up with new Christians after they leave the rehab center.

Your gifts through the Cooperative Program and the Lottie Moon Christmas Offering® make it possible for Southern Baptists to live among the fishermen in Sub-Saharan African villages so they can share the gospel with those waiting to hear. Thank you for giving.