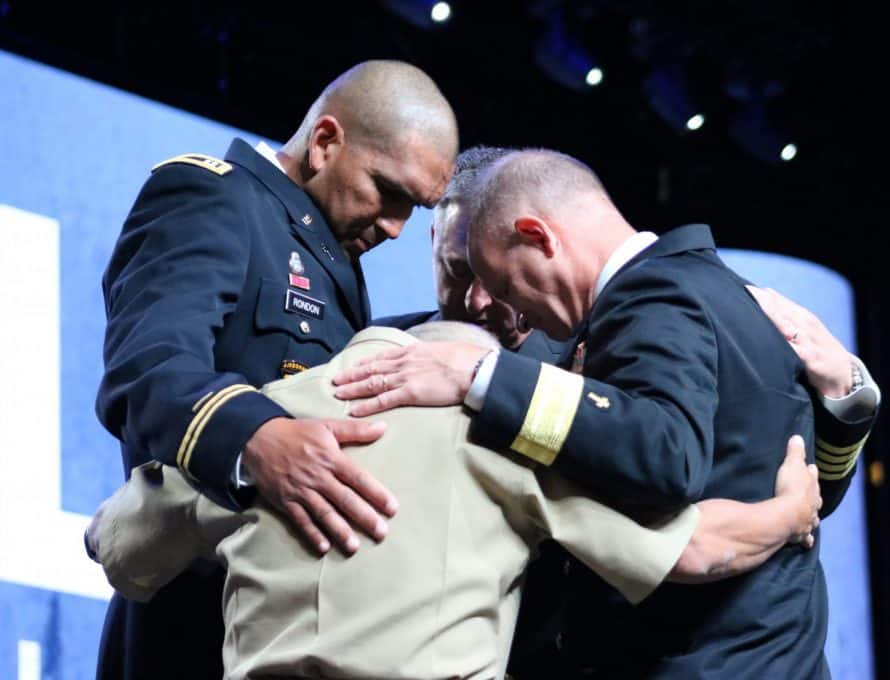 BIRMINGHAM – Captain Jose Rondon (left), a chaplain at the U.S. Army base at Fort Leonard Wood, prays with other Southern Baptist chaplains during a “Celebrating Freedom” portion of the Southern Baptist Convention annual meeting here, June 11.

FORT LEONARD WOOD – Capt. Jose Rondon of the U.S. Army huddled in prayer alongside fellow military chaplains on the stage of the Southern Baptist Convention annual meeting, June 11, in Birmingham, Ala.

Rondon was one of multiple chaplains representing all Southern Baptist affiliated chaplains in a “Celebrating Freedom” portion of the annual meeting. As Rondon and other chaplains prayed on stage, Southern Baptist messengers called out to God to bless these chaplains and bring spiritual awakening among members of the U.S. Armed Forces.

Such prayer is key for God’s continued work among members of the military, Rondon said – including on the Army base at Fort Leonard Wood, where Rondon has served since early last year. Since coming to the base, as reported in previous editions of The Pathway, Rondon has seen roughly 5,000 soldiers and trainees profess faith in Christ.

“We are in need of prayer – not only prayer for our trainees, but also for our chaplains,” Rondon said, “because not only are we preaching on Sundays, but we are in charge of battalions and brigades.”

“Prayer is really important for the chaplains,” Walker said. “Some of them counsel 25 soldiers a day. … It’s a tough job. I would encourage Southern Baptists to pray that all of our chaplains and their families are able to be sustained through what is a very rewarding job that most everyone of us love, but a job that is also very challenging.”

“God’s obviously doing a great work” among the 86,000 trainees that pass through Fort Leonard Wood’s military base each year, he added. When young trainees are immersed in the base’s “austere training environment,” they soon realize “they can’t overcome this event in their life on their own.” As a result, many of them turn to faith – and as they do so, they find spiritual support from the base’s many chaplains.

This is a reality that should encourage the families of the young men and women entering the Army, Walker said. “Their soldiers are being taken care of by Army chaplains.”

At Fort Leonard Wood’s Army base, there are more than 30 different chapel services representing various faith groups, as well as Bible studies and other religious programs for the trainees and soldiers.

At the end of May, Rondon was appointed as the officer in charge – in civilian terms, as the senior pastor – for three general Protestant services at Fort Leonard Wood, where he serves alongside eight other chaplains.

Only a few weeks later, he went to Birmingham for the SBC annual meeting, where he experienced firsthand the encouragement of Southern Baptists.

“It was very meaningful to be there because Southern Baptists have been very supportive not only of the Bible and prayer, but also very supportive of those who are in the military forces,” Rondon said. “Everywhere we went, it was amazing to see that people loved us, that they were praying for us, and that they truly believe in what we are doing.”

Originally from Venezuela, Rondon came to faith in Christ in 1991 through the witness of an International Mission Board missionary. Later, he immigrated to South Carolina, where he attended a Southern Baptist college – North Greenville University – and then worked on master’s and doctoral degrees at Southeastern Baptist Theological Seminary. He became a United States Citizen in 2010 and later joined the military as a U.S. Army Chaplain.