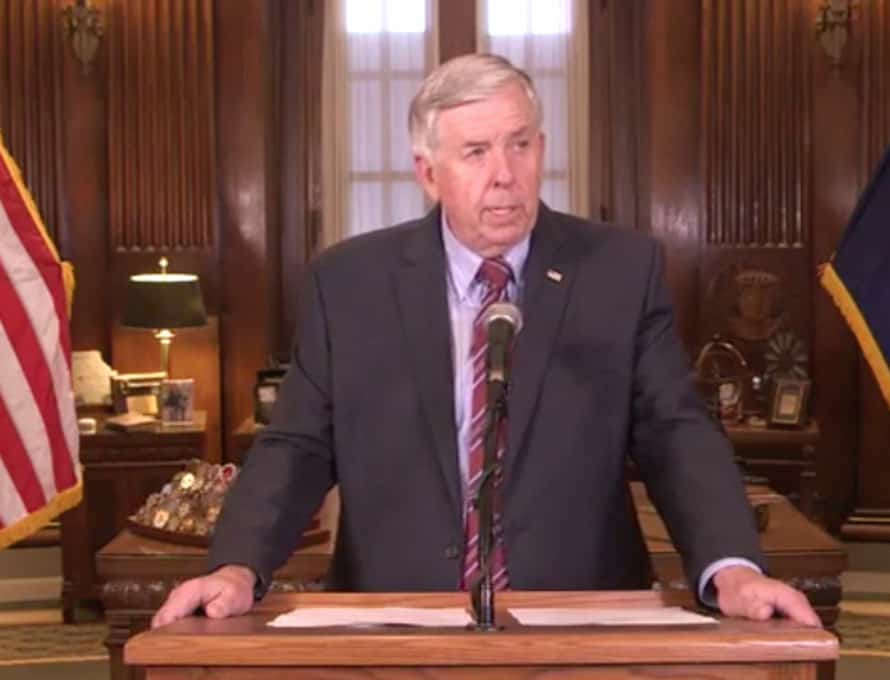 JEFFERSON CITY - Gov. Mike Parson speaks to the media from his office regarding the licensing process for the Planned Parenthood abortion facility in St. Louis.

JEFFERSON CITY – Gov. Mike Parson called for Planned Parenthood to comply with state law as the lone abortion provider in the state is asking for a restraining order that would keep its license from expiring at the end of the month. If it expires, Missouri will become the first state since 1974 ­– the year after Roe v. Wade was decided – with no licensed abortion facilities.

Attorneys for Planned Parenthood are expected argue before the St. Louis Circuit Court May 30 that the state is “unlawfully conditioning” renewal of the facility’s license on the completion of an investigation into a patient complaint — the reason for the doctor interviews holding up the licensing renewal process, according to the lawsuit. Parson said it would be “reckless” for a judge to grant a temporary restraining order ruling before the state has taken action on the license renewal.

“We should all agree that regardless of the number of abortion facilities, every step should be taken to ensure that all laws are followed for the safety and wellbeing of women,” Parson – a Republican and member of First Baptist Church, Bolivar – said in a press conference May 29.

Missouri’s Department of Health and Senior Services (DHSS) director, Dr. Randall Williams, told the St. Louis Post-Dispatch his department is weighing whether to renew the license of the facility’s license, which expires May 31. A March 11-13 annual inspection of that facility in St. Louis’s Central West End found “numerous violations of state laws and regulations,” Parson said. On April 3, DHSS began an investigation of the facility relating to “a series of instances that raised concerns about quality of care, patient safety, and statutory and regulatory compliance.” A week later, DHSS requested interviews with all seven of the doctors associated with the facility, though as of May 29 only two have consented to interviews.

“These actions are unprecedented,” Parson said. “No one is receiving any special treatment. The same steps and process are taking place whether it’s this one facility or any of the other 4,000 health facilities licensed by the state – with the singular focus to ensure the safety and wellbeing of patient care. Planned Parenthood’s apparent disregard for the law, their failure to complete complication reports, and the accuracy of medical records are all serious concerns that need to be addressed prior to any license renewal – and they still have two more days to comply.”

Meanwhile, the American Civil Liberties Union of Missouri filed a referendum at the Missouri secretary of state’s office in an effort to roll back landmark pro-life legislation passed last week. Parson signed the Missouri Stands for the Unborn Act May 24.

That legislation, which takes effect Aug. 28, will:

The referendum is still in the “Accepting Comments” phase according to the Missouri’s Secretary of State’s website and is not yet approved for circulation. Those wishing to put the referendum on the ballot will have to collect more than 100,000 signatures before Aug. 28. If the group turns in enough signatures, the state will not be allowed to enact the law. At that point, a simple majority of voters could veto the law once it is placed on the ballot in 2020.

Missouri is the latest of several states – including Ohio, Mississippi, Arkansas, Utah, Georgia, Kentucky and Alabama – that have increased restrictions on abortions in recent months, even as states like New York and Illinois move to increase abortion access and protections.