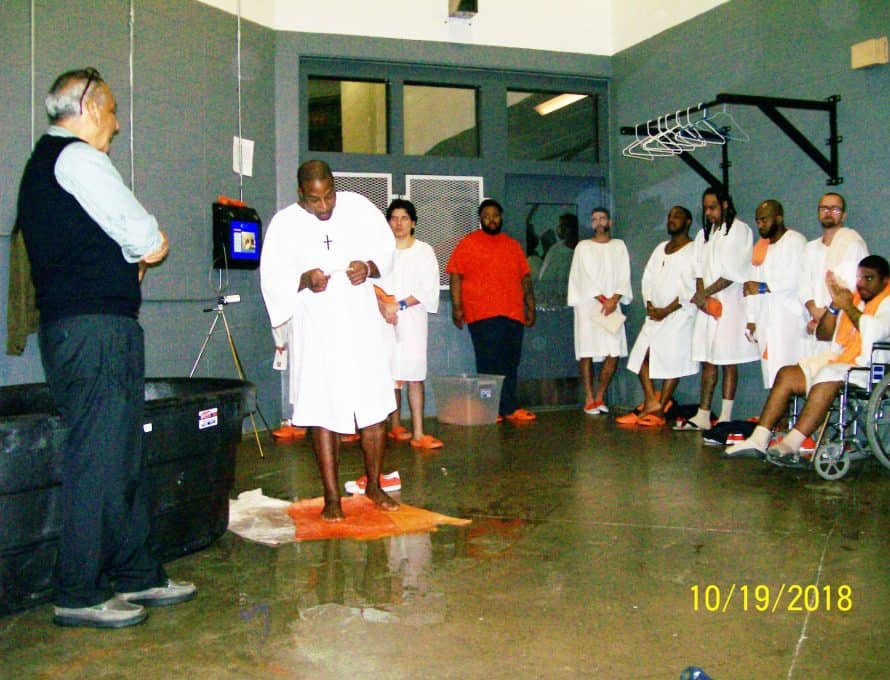 TROY – As inmates wait in line to be baptized at the Lincoln County Jail here, one of their peers and gives a testimony to his newfound faith. The men were saved as a result of a prison ministry led by First Baptist Church, Wentzville. Submitted photo

WENTZVILLE – Inmates at the Lincoln County Jail in Troy are coming to see that God’s amazing grace can set any prisoner free because of a prison ministry led by First Baptist Church, Wentzville. The weekly church-led Bible study at the jail is making a difference in the lives of these men.

“The men are experiencing joyful living, although incarcerated,” Lieutenant Andy Binder, church member and public information officer of the Lincoln County Sheriff’s Office, said.  “Their burden is lifted, and they’ve discovered their life is worth something.”

Jim McCallister is the founding member of the prison ministry at Wentzville. “I’ve ministered in prisons and jails for thirty years, and I thought we should do something here,” he said.  “So, I set up a table and started recruiting other men. I am joined by Vance Polen, Daniel Campos, Ernie Martin, Daniel Hubbell, and Ed Preston. We also have a dedicated Ladies Senior Sunday School group who are praying for this ministry’s success.”

Both McCallister and Binder said the success has been gradual.  “When we began, we had only nine attending, and they were difficult to settle down,” McCallister said.  “Then, after a while, they wanted to come, and their attention was good as they participated.”

“The Bible study grew from just a few,” Binder said, “and now it is over 30 every time. The inmates invite others, so it is always growing.”

Binder measures the real success in the change of the men.  “It has been a real transformation,” he continued.  “The sheriff has noticed the difference in these men.”

According to Binder, the jail houses inmates with varying levels of offences. “In different areas of the building,” he said, “we hold federal felonies – everything from traffic warrants to murderers.  We keep the violent offenders away from the others.”

“Some of these inmates are in a very dark place,” Binder said.  “It is encouraging to see them develop joy in Christ.  One big dude was a violent dude, cussing all the time.  Now, he respects God and he shares with others.”

“Fighting is rare,” he added.  “The Bible study is having a positive effect in the way they treat each other. The men leading the study don’t always see the residual effect on the lives of the inmates.”

As the men came to know Jesus, they wanted to be baptized. “The baptism took months to implement,” Binder said. “I was visiting my friend, Tim Overstreet, worship pastor at Journey church in Troy, and I saw a portable baptism pool. So, I asked if we could use it at the jail.  He loaned it to us with a pump to get the water in it.”

Binder and McCallister both said the baptism was an encouragement and inspiration. “We had 13 white robes,” Binder said, “just enough for the men who wanted to be baptized. It was wonderful to see the men stand before all and give a testimony of their love for Jesus