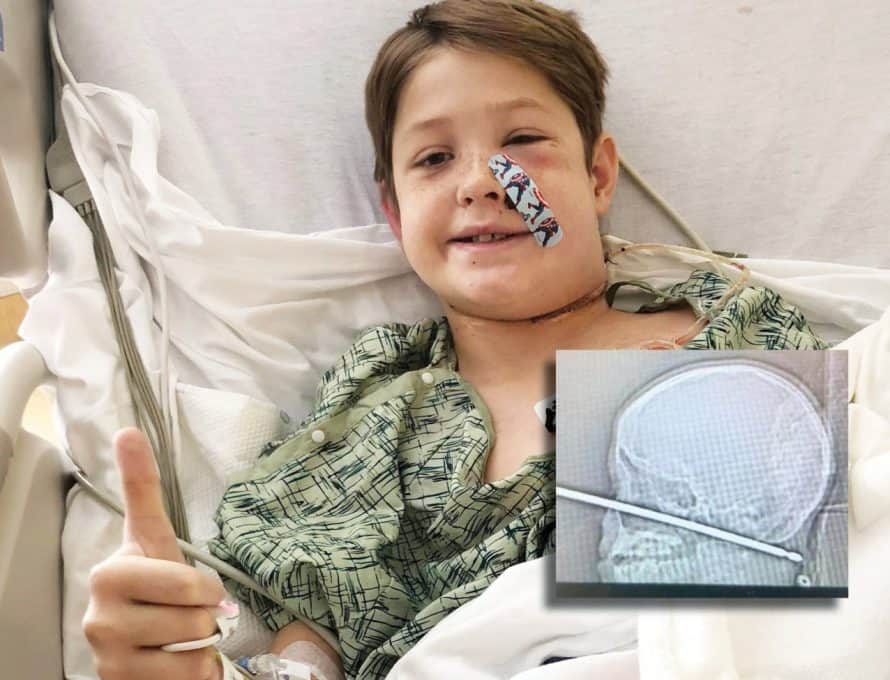 KANSAS CITY – Xavier Cunningham lets his parents know he is OK after surgeons successfully removed a meat skewer inbedded in his face. Doctors – as well as The Church at Pleasant Ridge – are calling the boy’s survival a miracle. The inset x-ray shows just close the skewer came to piercing Cunningham’s brain. Pathway photos courtesy Shannon Miller

HARRISONVILLE – Members of The Church at Pleasant Ridge near Harrisonville are praising God for His miraculous intervention after a 10-year-old boy from the church fell out of a tree house, landing face-first on a foot-long meat skewer.

The church held a special celebration service, Sept. 23, to express gratitude to God and to the many doctors who played a part in saving Xavier Cunningham’s life.

‘It’s a miracle he’s even alive’

On Saturday, Sept. 8, Cunningham and two of his friends asked if they could play in a treehouse in a neighbor’s backyard. And earlier that day, as they played, the boys found a meat skewer in a field behind the neighbor’s house. So, before climbing into the tree house, one of them stuck the meat skewer into the ground, pointed upward.

Then, as soon as they reached the top of the tree house, they realized that they’d aroused a large nest of yellow jackets, which were now following them. They needed help. So, quickly, Cunningham opened the treehouse door and made his way down the ladder. But, as he climbed down, a yellow jacket stung his hand, causing him to fall 8-10 feet onto the meat skewer.

His fall drove the meat skewer six inches into his head, from the nasal cavity near his left nostril to the back of his skull. But, as medical scans would later show, the meat skewer passed through his head without causing any serious damage. It barely missed two major arteries and a bundle of vital nerves, as well as the upper portion of his brain, his brain stem and his spinal cord. It grazed one of his jugular veins, but the wound clotted and didn’t bleed out.

“The doctor said that this is really the only possible way you could be impaled by something … and it not be fatal,” Cunningham’s father, Shannon Miller, told The Pathway. “We were looking at those scans, and the doctor said, ‘It’s a miracle he’s even alive now.’”

Rush to the ER

Miller, who is a member at The Church at Pleasant Ridge, said that the meat skewer would have caused drastic – perhaps fatal – injuries if it had moved even a few millimeters in any direction. If Cunningham had fallen from a higher point or if he had touched the meat skewer or tried to pull it out, he may not have survived.

“He said he felt a really sharp pain, a lot of heat in his face,” Miller recalled. “But he said what really hurt was that the yellow jackets were all over him and stinging him.”

Perhaps distracted by the yellow jackets, Cunningham didn’t disturb the meat skewer, and he quickly ran home. His mom rushed him to the Emergency Room and called his dad, who was with their two other sons elsewhere that morning.

Not realizing how serious the injury was, Miller returned to his house – only to find firetrucks, police cars and an ambulance parked on their street. They had arrived to rescue Cunningham’s two friends, who were still stuck in the yellow-jacket infested tree house.

When he went into his home, Miller found more yellow jackets that had followed Cunningham into the house earlier. He also found a puddle of blood near the stairway, as well as trickles of blood elsewhere. Just then, he received a text message: a photo showing Cunningham with the meat skewer protruding from his face.

“That’s when it hit me,” Miller said. “I started seeing spots and getting tunnel vision, and I thought I was going to pass out.”

Then his father-in-law drove him to the hospital. Cunningham was transferred from the local hospital, to Children’s Mercy Hospital in Kansas City, and then to the University of Kansas Medical Center on the Kansas side of the city.

It was only there that Miller finally saw his son. As he entered the room, the boy’s face was wrapped in bandages. He opened his eyes and peered through the bandages as if he were looking for something. He asked his father, “Is it still there?” Yes, he replied. The meat skewer was still there.

“That was probably one of the most terrifying things that I’ve ever seen,” Miller remembered.

Until the next day, Cunningham’s family waited as a team of 100 doctors considered how best to remove the meat skewer. In the meantime, the word was spreading to members of The Church at Pleasant Ridge, as well as to other churches around the state and nation. The family also gathered around the bed to pray, and they turned on a playlist of worship music that Cunningham enjoyed.

“He would sing along,” Miller said. “The nurses would come in the room (as he sang). They’d stop in their tracks, turn around and wipe away their tears.”

Malachi O’Brien, pastor at The Church at Pleasant Ridge, stayed in touch with the family and was at the hospital as much as he possibly could be, Miller said. On Sunday, Sept. 9, he spent the early hours of the morning with the family and then went back to Harrisonville, where their morning worship service was transformed into a time of “desperate prayer.”

Earlier that morning, Miller shared his own desperate prayer on social media.

“My beloved Lord, my God,” he prayed, “I do not know the plans you have for us. If it’s your will to heal my son I ask that you do so quickly. But if you take him, I will forever be honored that you allowed me to call him my son, my boy, my own bear. I will still worship you my king. I will draw strength the from you as I grieve. I will take rest in knowing you love me. I will not forsake you, my God, my king, I will forever praise you. Please have mercy on us. Your will (be done) on earth as it is in heaven. Amen.”

Later that morning, doctors took his son back to the operating room. They had decided to pull out the meat skewer by hand. That afternoon, around 2-3 p.m., they approached the family with good news: the meat skewer had been removed, and the boy would be okay. Only a few days later, on the evening of Sept. 12, they released the boy to go home.

For Miller, this experience led to a personal “revival,” an opportunity to place his trust completely in God. “I’ve always been a man of faith,” he said. “I’ve always believed that God loves us and is on our side. But at this point I know that God not only loves us, but He is madly in love with us.”

Likewise, according to  O’Brien, this “miracle” has “deepened the faith” of other members at The Church at Pleasant Ridge. “Even in the worst of situations, no matter how bad things are,” he said, “we serve a God that can do the impossible.”