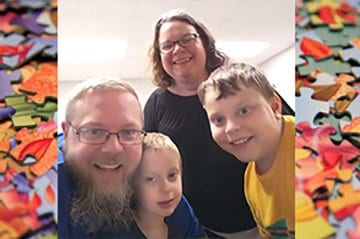 JEFFERSON CITY – The Gilzow family just wanted to worship together.

But sometimes that simple desire could be a challenge. Five-year-old Ozias, who is on the autism spectrum, could easily be overwhelmed by the constant barrage of sounds and the requirement to sit still during a church service, prompting his parents, Tim and Joy, or his older brother, Blaze, to step out and be with him as he sought some relief.

Their church family at Cornerstone Baptist Church saw the need. They approached the pastor and the Gilzows about the possibility of a sensory room that might give Ozias a break while allowing him and his family to be engaged in the worship service together.

The Gilzows have turned Ozias’ bedroom at home into what is essentially a sensory room and have noticed it helps him when he needs to get away for a moment. So the idea of having one at church that might allow them to worship together was an answer to a prayer they didn’t even know they needed.

At its most basic level, a sensory room is a place where people can get away from an overwhelming stimulus, whether that’s a big crowd, loud noises and bright or flashing lights. Many churches already have something similar in a quiet room or a cry room with a window into the auditorium, but a sensory room takes things a step further. A “true” clinical sensory room has special mats, dimmable lights and can cost upwards of $10,000. While Cornerstone was eager to help by converting a room at the back of their auditorium, that was a little bit outside the budget.

“You can go really expensive, but just making some accommodations and even just having a room where a family can go goes a long way for us or any family that needs to use it,” Tim said.

The Gilzows compiled a list of things that might be helpful in such a room, and they and others in the church began scouring garage sales and the classifieds to fill it. Another member painted murals on the walls.

The room at Cornerstone has the ability to lower the volume of the service and much more. Since every person on the autism spectrum is different, some also need sensory input. So the room has different textures on the wall to engage senses, and it has a small trampoline and rocking chairs to satisfy the need to be in constant motion. There is a small tent for when Ozias needs to get away and be on his own for a little bit. Either way, the sensory room is for anyone in the church that needs a moment away.

“It is really nice to have that support and be able to worship as a family,” Joy said. “We definitely take advantage of it.”

The Gilzows were already faithful members at Cornerstone, but for many families, a child with autism can mean it’s simply easier to spend Sunday mornings at home. A July study published in the Journal for the Scientific Study of Religion found that families with children with chronic health conditions such as autism, learning disabilities, depression, and conduct disorders might represent a hidden unreached people group within communities all over the country.

Children with autism were nearly twice as likely to never set foot inside a church as kids with no chronic health conditions.

Among other findings of the study:

• The odds of children with autism spectrum disorder never attending services were 1.84 times higher than for children without a chronic health condition.

• The odds of children with depression and anxiety never attending services were 1.73 times greater.

• The odds of those with a conduct disorder or oppositional defiant disorder never attending were 1.48 times greater.

• The odds of children with a developmental delay or a learning disability never attending were 1.36 times higher.

• The odds of children with ADD/ADHD never attending were 1.19 times higher.

The study noted that “every child with a chronic health condition is different, so there is no effective, cookie-cutter approach to welcoming them. However, having a system in place where families are seen, heard, and valued will go a long way toward preventing a religious community from becoming yet another bureaucracy these families have to navigate. Instead, these communities can become places of rest and refuge.”