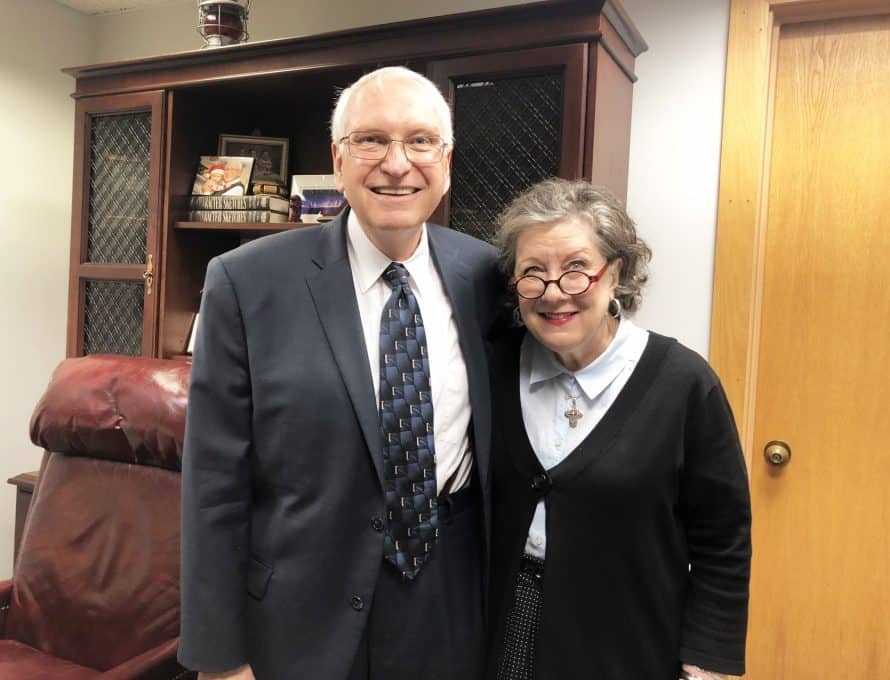 ST. LOUIS – The traditional gift for a 40th wedding anniversary is ruby. To celebrate four decades of marriage to her husband, Dwight, Sherry Blankenship went over the top and gave him a kidney. It’s a story not only of love between a husband and wife, but also of support between a church and its pastor, as well as God caring for His servant.

‘The Father Watching Over His Child’

Dwight, who has served as pastor of Parkway Baptist Church here for 24 years, went in for his annual physical in 2014. The blood tests revealed elevated numbers of certain indicators of kidney function, prompting him to see a kidney specialist. Everything Blankenship and the doctors tried over the next two years failed and the numbers continued to get worse. He felt fine – though the people at Parkway began to notice he was losing a bit of color and there was less spring in his step – but the numbers showed his days were numbered.

“Eventually, after therapy, medication and changing my diet, the doctor shared with me that the only solution was a kidney transplant,” he said.

Unbeknownst to the Blankenships or his specialist, the imminent failing of his kidneys was a blessing in disguise. In preparation for the transplant, he underwent a battery of tests and exams, including an extensive stress test. When the doctors came out with his results, he learned there was a more immediate threat to his life. He had blockages in the arteries surrounding his heart, and he needed bypass surgery before any kidney transplant could be considered.

“My Father was watching over me,” Blankenship said. “He knew about kidneys, but He also knew about my heart. It’s the Father watching over His child. So many people – my cardiologist, the kidney specialist, the surgeon – they all said it was amazing that this was found while dealing with the kidneys to save my life.”

Blankenship had quadruple bypass surgery in December of last year. Then he went through six months of “pretty intense” rehab to prepare for the transplant. In the meantime his kidney function was almost down to zero, so he began a dialysis regimen. For four hours a day, three days a week, his blood was pumped out, filtered, then pumped back in.

“That was an ordeal,” he said. “Some (people have) been on dialysis for years. And some (are) not candidates for a transplant, and that’s their life. I am very blessed because I was only on dialysis for six months.”

His heart healing nicely, the surgeons set a date for the transplant: June 19.

When the need for a transplant became clear, Sherry Blankenship immediately knew – as most spouses probably would – that she wanted to be tested to see if she was a match to donate one of her kidneys to her husband.

The details of a kidney transplant are complicated. A transplant from a living donor, rather than one with an organ donated by a deceased person, has a substantially higher chance of success. Live donor recipients spend less time waiting for a donor organ (as opposed to waiting several years for a deceased donor). Immediately upon transplantation, 97% of live donor kidneys are fully functional, versus 50-60% of deceased donor kidneys. Plus, the live donor recipients face less risk of organ rejection.

Matching goes beyond finding someone with the same blood type. There are six antigens that can determine whether a donated kidney will be accepted or not. A perfect match is when all 6 are compatible. A person’s best bet is usually a sibling, which have a 25 percent chance of being an “exact match” and a 50 percent chance of being a “half-match.” The Blankenships’ sons began the testing process, as well as several people in the church. The odds of a spouse being a match are extraordinarily low, but Sherry wanted to try anyway.

“The general cut off is age 60, and I’m 66,” she said. “But I asked if we could at least try to see if I was a match. It’s not unheard of, but it’s very unusual. Every step of the way they told me not to be disappointed when things didn’t work out, and that at least I tried.”

She wasn’t an exact match. But when the doctors pored over the tests, her kidney was an acceptable match, and she was in good health. With anti-rejection medication, there was no reason not to move forward with the transplant.

On June 19, at 5:30 a.m., Sherry went into surgery as doctors extracted her left kidney and transplanted it to Dwight about 8 a.m. By noon, they were out of surgery, each with one working kidney. (Dwight actually has three kidneys, because it’s easier to simply leave the non-functioning kidneys.) Five days later, on their 40th wedding anniversary, they were released to go home.

Blood tests twice a week for the next month showed the kidney is functioning well. He’ll continue weekly tests through September, then every two weeks through next summer, and then monthly after that.

Blankenship returned to the pulpit Aug. 6. He’s in the office on a limited basis, or as he puts it, “I stay until my ministry assistant tells me, ‘Pastor, go home and take a nap.’”

“God has watched over me,” he said. “And my wife’s surgery was more difficult than mine, and she has recovered even quicker than I have.”

“My church has been excellent, very loving and very caring,” he said. “I’ve had to be taught to rely on other people. They’ve used their giftedness, they’ve given me the time off, brought food to the house, and watched over me. The staff has taken on additional responsibilities, especially hospital visitation.”

That’s because the anti-rejection medication Blankenship takes twice a day everyday helps ensure his body and the new kidney continue to work together, but it also lowers his immune system, making him susceptible to sickness. He’s hoping that perhaps in a year, maybe sooner, the doctors will eventually approve him to make hospital visits.

“This life is short,” Blankenship said. “Whatever you do for the Lord, you need to do it with vigor and your whole heart, because this life will soon be over.”