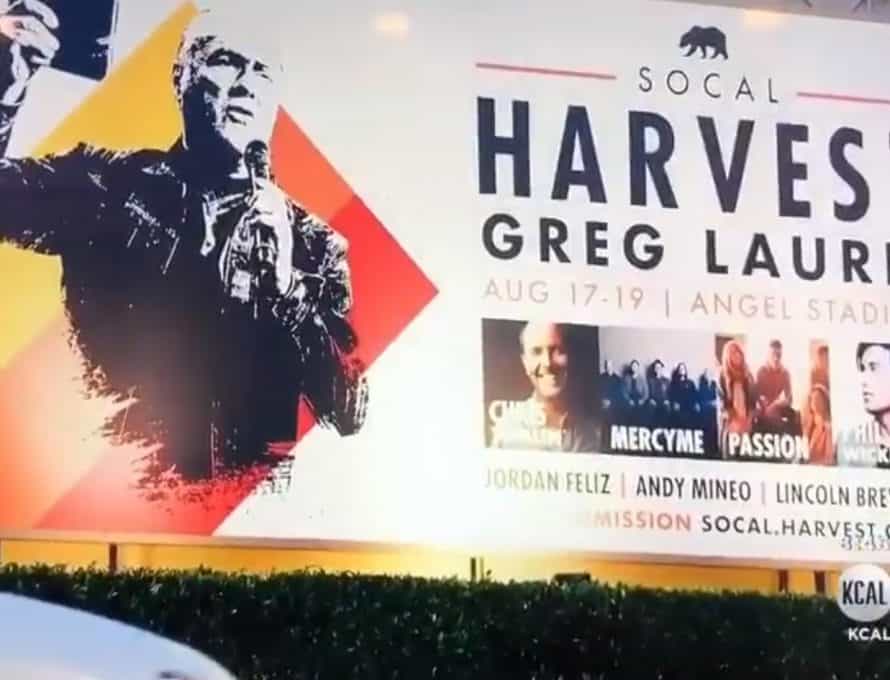 ANAHEIM, Calif. (BP) – After promotional materials for the SoCal Harvest crusade were taken down from two Southern California malls because they showed pastor Greg Laurie holding a Bible, Laurie is asking attendees of the event to hold up their Bibles in a show of support for God’s Word.

“Apparently, in our intolerant culture, we no longer can display the Bible in public,” Laurie, pastor of Harvest Christian Fellowship in Riverside, Calif., wrote in an Aug. 17 op-ed for the Los Angeles Times. “The art in question was a tribute to my hero and mentor, the late Rev. Billy Graham, who often lifted the Bible high over his head as he preached to stadiums full of people. We hold the Bible high, just like Billy did, because it has changed our lives.

“The same is true for millions of other people; and it has been true for centuries…. And yet, here we are, having to tiptoe around some who find it offensive,” Laurie wrote.

Laurie has asked SoCal Harvest attendees to bring their Bibles to the Aug. 17-19 event as part of the #StandWithTheBible social media campaign in response to the Irvine Company’s decision earlier this month to pull billboards promoting SoCal Harvest from its malls in Irvine, Calif., and Orange County, Calif. The billboards provoked complaints, according to media reports, including a “serious threat.”

Harvest redesigned the billboards’ artwork to exclude the Bible — which did not have any writing or religious symbols on it in the first place — but that did not resolve Irvine Company’s objections, CBN News reported. Laurie’s Harvest organization was refunded its money when the billboards were taken down.

Tonight (Aug. 17) Laurie will ask SoCal Harvest attendees “to hold the Bible high over their heads in a show of support for the ‘book of books,'” CBN reported.

An identical billboard in The Galleria at Tyler mall in Riverside, which is owned by a separate company, is still on display, according to CBS’ Los Angeles affiliate KCAL.

SoCal Harvest is expected to draw as many as 100,000 people to Angel Stadium in Anaheim, and will feature Christian recording artists, a freestyle motocross show and Gospel presentations by Laurie.

The #StandWithTheBible campaign launched Aug. 11 with a tweet by Laurie and asked people to post on social media photos or videos of themselves holding a Bible with the campaign hashtag.

“I’m offended by things I see all the time — in malls, things I see in billboards,” Laurie told KCAL. “But I’m not out to boycott or stop people from having that art displayed, especially if they paid for it.”

During SoCal Harvest’s 29 years of existence, more than half a million professions of faith in Christ have been registered, Laurie wrote in an Aug. 7 blog post.

Laurie, a Southern Baptist, has partnered with the North American Mission Board the past two years to hold Harvest America crusades in conjunction with the Southern Baptist Convention’s annual meeting. This year’s event in Dallas yielded more than 3,000 salvation decisions from in-person and online attendees.