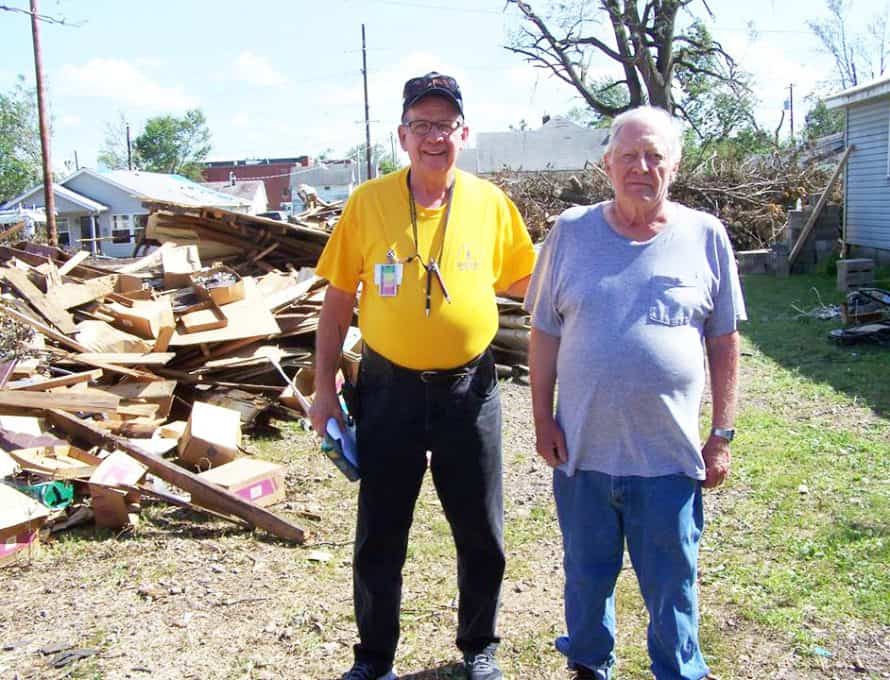 MARSHALLTOWN, Iowa – Ham radio can be the ultimate communication tool during a disaster, and Missouri Baptist Disaster Relief communication volunteers are trained to set up networks and relay messages when all other forms of connection are down. But after a tornado in Iowa, ham radio provided a different type of connection for one man who lost his garage and roof.

Jerry Palmer, a communications “Blue Hat” (team leader) from Lawson, was working at the Incident Command Center as Missourians helped clean up after 12 tornadoes churned through Iowa communities, July 21. He picked up a ham radio signal from a survivor named Mr. Calkins. He was diabetic, had difficulty seeing and had no forms of communication other than his radio. Palmer sent out to two more Missouri volunteers, Joe Dayringer and Bill Johnson to see if there was anything Missouri Baptists could do.

“He began to tell his story,” Dayringer said. “When he talked about when the tornado struck, he spoke of feeling a ‘presence’ around him and thought it might have been God or Jesus. As we continued the assessment, we talked more about the spirituaål aspect of his life.”

They asked him if he would like to “ask Jesus into his heart and life right now.” He did.

“We asked him to put this request in his own words and to make that personal request, and he did,” Dayringer said. “We were standing on the foundation of the garage that had been destroyed by the tornado.”

The Missourians gave Calkins a New Testament and encouraged him to talk about his decision with his family and join his daughter at her church.

After Dayringer and Johnson returned, Palmer and another Missourian returned to visit with the man to follow up and talk amateur radio.

“He lost four towers, I don’t know how many antennas, garage completely destroyed and two roofs on the house,” Palmer said. “He remained very optimistic and ‘blessed the socks off’ of all of us.  As we left, I said ‘God bless you’ to which he responded ‘and God bless you,’ adding, ‘A week ago I would not have said that.’”