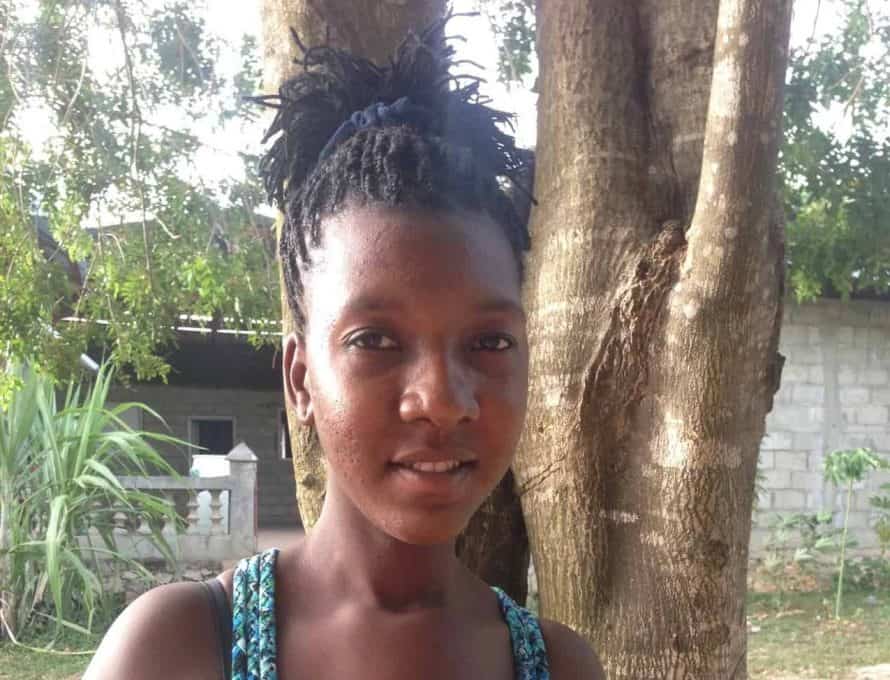 Photo courtesy of HHH PIGNON, Haiti – Madeline, shown here, came to Haiti Home of Hope (HHH) here as a 17-year-old amputee victim of the region’s massive earthquake in 2010. According to Bill and Jennifer Campbell, who serve at HHH, she’s a testimony to how GOd continues to work amid the various crises that Haiti has faced through the years.

PORT-AU-PRINCE, Haiti – Missouri Baptist mission teams have made it home safely from Haiti following political upheaval and riots that were ignited in the nation’s capital earlier this month. Nonetheless, Missouri Baptist ministry efforts continue because of the faithful service of long-term missionaries in the region.

More than 200 Southern Baptists from around the nation, according to Baptist Press, were trapped in Haiti, July 6, when the nation’s citizens rose up violently, protesting a government announcement that gas prices would be raised. Missouri mission teams from Calvary Baptist Church, Neosho, and Southwest Baptist University followed the U.S. Embassy’s warning to “shelter in place” – that is, to take refuge – until they found the opportunity to travel safely to the airport and finally fly home.

On July 5, a team of four women traveled to Port-au-Prince, Haiti’s capital and the center of the violence, to set up blood pressure clinics and share the gospel.

“They were able to have one clinic on Friday (July 6), but they ran into some protesters,” said Russell Duncan, associate pastor of missions at Calvary, Neosho. That evening, they took shelter and were able to fly home on their regular flight, July 9.

Another team, this one from Southwest Baptist University, made it safely back to Missouri early last week, according to a July 10 press release from the university. Since 2014, SBU’s Department of Physical Therapy has organized medical service trips in the nation, involving current students, faculty and alumni.

“At no time was our team in any danger,” said. Bev McNeal, professor of physical therapy and Global Health Outreach coordinator. “They made it back safely to the United States Monday evening, the same day they had originally planned to arrive home.”

The team completed its mission by providing four full days of medical care to the Haitian people. They offered hope while tending to physical needs, such as back, knee and shoulder problems. They saw children with foot and ankle problems whom they were able to help with orthotics and exercises. A few members of the team even spent hours building and customizing a wheelchair for a young child with cerebral palsy.

“Since we started sending teams to Haiti in 2014, we have assisted hundreds of people,” McNeal said. “We look forward to many more medical service trips to help people around the world.”

‘This is my home right now’

Although these and other short-term mission teams left Haiti amid its political unrest, other missionaries have remained.

During the past two years, 26-year-old Caitlin Campbell – a member of Concord Baptist Church, Jefferson City, and an SBU alumnus – has served in Haiti with Hope Community Project, where she homeschools the field directors’ children. She lives in Gonaives, a coastal city roughly 3 hours from Port-au-Prince.

“I personally have seen very little first hand,” she told The Pathway, July 11. “This situation was unique for me because I am currently the guardian for a child that is not my own. I think because of that, it did make me think through on an even deeper level than I might have, what my plans were should this get more tense. I don’t know that I would say I was scared, but I was concerned and, I think, heartbroken.”

“I personally have seen very little (violence) first hand,” she added. “We had a few roadblocks on Saturday and a couple of protests on Monday, but other than that my city has been calm. And even the events that we did have dissipated after a short time.”

Despite the political upheaval, she expressed her love for the Haitian people and her confidence in God.

“I know that I am right where God wants me, and never once did I feel like I needed or wanted to leave this place,” she said. “God has put me here, and God will protect me. This is my home right now.”

Nearly 15 years ago, Bill and Jennifer Campbell – no relation to Caitlin – were commissioned to serve full-time at Haiti Home of Hope (HHH), an orphanage founded and operated by Red Bridge Baptist Church, Kansas City. Although it is located in Pignon, more than three hours northeast of the nation’s capital, the orphanage increased security and remained vigilant amid the riots and unrest.

“Some people who are originally from this area still have family living here and do return to seek safety from the violence, usually returning once the violence has ended,” the Campbells told The Pathway. “Sometimes the violence will slow the progress of supplies such as gasoline, diesel, and food items getting to this area, which can negatively affect the economics here. Sometimes we see an increase of malnourished children coming through our feeding clinic program during these times. Sometimes the violence will spread into the next largest town to us about 20 miles away, and can cause traveling delays for us going that direction.”

The violence, they confessed, is a symptom of “a depraved and sinful world.” Nevertheless, they added, “God is in control and has grown our faith as we go through these trials.” As a result, they hope they’re able to help the children and staff at HHH to lay aside their fear and to trust God.

“All we can do is to be ready to help those the Lord would bring to us that may be affected by (the violence),” they said. In the meantime, they’re celebrating the work that God is doing in the lives of children through HHH.

“One of our older boys, Devnel, graduated high school this spring,” they reported. “He is our second child to graduate. Graduating high school is a big deal here. Very few kids have the opportunity. So we, of course, are very proud of him, and thankful.

“Our oldest girl, named Madeline, recently got engaged to a fine Christian man we approve of,” they added. “She actually came to HHH as an amputee victim of the 2010 earthquake at the age of 17. She had only finished 2nd grade and then was too old to continue. But the Lord allowed us to send her to a three-year sewing and cooking trade school, and she is now employed by HHH and another nearby ministry, as well.

“We are just now seeing the fruits of our labor for our older kids as the Lord blesses them and prepares them for adult life. These are encouraging and exciting times for us as their parents.”