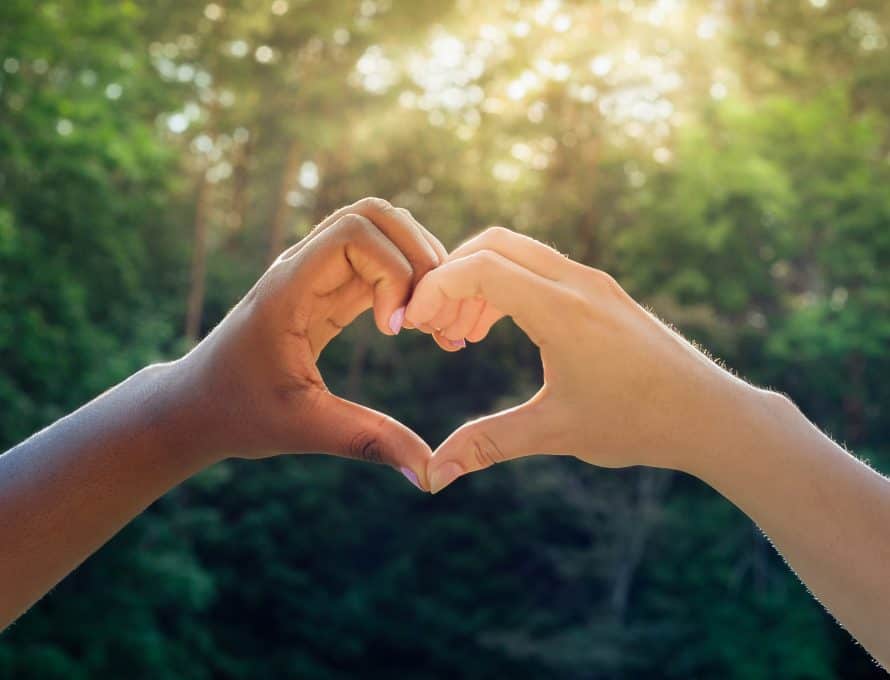 Paula, my wife and ministry partner, loves Psalm 145:4 “One generation shall praise Your works to another, and shall declare Your mighty acts.” This verse is the preface for the times when Paula and I talk to our grandchildren about the many ways we have seen God at work in our extended family.  Believe it or not the grandkids love these stories about our history and will often ask for us to “replay” certain stories.

Among the issues that have been discussed in recent days is the matter of racial reconciliation and social justice and how we should address them as a denomination. Before we look at the present and future, it might be helpful to take an honest look at our past. While no one would deny that some persons and some churches have been less than Christian in their treatment of persons of other races, I think it is important to look at the positive contributions to racial reconciliation that is also part of our collective history.

A Look at our Past

Although critics argue that much of the division between Baptists in the North and South was related to slavery, they often fail to point out the role Southern Baptists have played in trying to remedy racism. (I have included several resolutions from our history.  Please note that the language of many of the resolutions will use language we would not consider appropriate today.)

In 1884, fewer than two decades after the end of the Civil War, Southern Baptists reiterated their Gospel responsibility to Blacks in the South, declaring in a consensus statement a commitment to the “seven millions of colored people within the bounds of this Convention” with regard to religious instruction, resolving to provide “for their evangelization, and their proper instruction in the truths and duties of the Gospel,” and, pledging to raise up properly instructed “colored preachers and deacons.” This action is significant because it followed nearly 19 years of massive hostility and violence by some religious southern Whites.

Importantly, just two years later (1886) Southern Baptists dedicated what would be the 2018 equivalent of a quarter of a million dollars “to aid young colored ministers in acquiring education and more perfect training for their work.” This occurred at a time when Southern Baptists were still recovering from an economy wrecked by war.

In 1939 and 1940 Southern Baptists took a bold stand by repudiating lynchings and mob violence and committing “to do everything possible for the welfare…defense…and protection” of African Americans, urging for greater “law and order.”

Moreover, in 1939 and 1940, messengers lamented “the disproportionate distribution of public school funds, the lack of equal and impartial administration of justice in the courts, inadequate wages paid for Negro labor and the lack of adequate industrial and commercial opportunity for the Negro race as a whole,” pledging “to use our influence and give our efforts for the correction of these inequalities” and “to strive to the end that our friends and neighbors of the Negro race shall have…equal and impartial justice before the courts, better and more equitable opportunities in industrial, business and professional engagements; and a more equitable share in public funds and more adequate opportunities in the field of education.”

Historian David L. Chappell noted that after the 1954 landmark Supreme Court decisions in Brown v. Board of Education, “The Southern Baptist Convention passed resolutions supporting desegregation and calling on all to comply with it peacefully.” The actual vote was nearly 9000 to 50, according to a report in the Christian Index at that time.

We were the first among the larger denominations to apologize publicly for our role in slavery and racism (1995). Our six seminaries were among the first institutions in America that were fully integrated (1958). We elected Fred Luter, an African American as SBC President (2012). Moreover, we presently have African Americans and persons of other ethnic groups serving on many of our boards and currently on the search committee for the SBC Executive Committee president.

Twenty percent of our local churches are comprised of races other than Euro-Americans. We are becoming increasingly diverse as we move forward in our goal to reach people with the Gospel, believing that every person needs to know Jesus and become fully involved in the local church of their choice.

Since I had the privilege of serving one of our seminaries, I want to take a brief look at the timeline for the integration of our seminaries. According to David Roach in an SBC Life article, in 1942 Southwestern began offering night classes for Black preachers on their campus and Southern Seminary began teaching Black students with professors and students holding classes in faculty offices since a Kentucky law prohibited educational institutions from teaching both White and African American students as pupils. In 1944 Garland Offutt became the first Black graduate of any SBC seminary. In the mid-1940s Southern Seminary began allowing Blacks to sit in classrooms with Whites despite state prohibitions against integration. Southern Seminary hosted civil rights leader Martin Luther King Jr. on campus in 1961. Only five years later, in 1966, Golden Gate Seminary had more Black students than any other seminary on the west coast and more foreign students than all other west coast seminaries, combined.  In 1986 Southern Seminary hired T. Vaughn Walker, the first African American professor at any SBC seminary.  In 1987 Golden Gate hired Leroy Gainey.

On a personal note, as president of Southwestern Seminary in 1998, I was privileged to hire Raymond Spencer, a doctoral student at the time, as the assistant professor of preaching — the first fulltime African American professor at the seminary. His election to the faculty was not based on race; he simply was the best qualified candidate for the position. He was an outstanding scholar and preacher who brought together the best of the academic world and practical ministry skills, and was a favorite among the students. He was one of the bright stars among Southern Baptist scholars of all races.

My father was a pastor in North Carolina for his entire ministry. My dad taught me to treat all people with dignity and respect without consideration to the color of their skin or ethnicity. While still pastoring in Morganton, (the 50s) he worked with a Black Baptist church to provide Vacation Bible School for their children. My dad was principal, my sister was lead teacher, and my brother helped with the crafts. I attended with all the other students. It did not dawn on me at that time that this was not the way most 8 year olds spent their summer.

When I was 9 we moved to Thomasville and my dad continued to work for racial equality. We lived near several Black families and the children were regular playmates of mine.  When I was a junior or senior, all our local public schools were integrated. I can still remember the first Black student who walked into my chemistry class. Johnny Burnside stood awkwardly at the door, not sure whether to come into the room or not. Our desks were designed with two seats side-by-side and it was obvious he did not feel welcome or comfortable. I walked to the door and invited him to join me at the desk. I am telling this story to illustrate how my dad’s teaching impacted me. It was great preparation for my ministry in Norfolk. As you might imagine, our military community led to an ethnically diverse congregation with people of different races in lay leadership positions.

Our history indicates that while we have taken some important steps in terms of race relations, yet there is much more for us to do. I have often stated, “Nothing changes anyone’s heart, mind, and behavior but the Word of God applied by the Spirit of God.” We must preach the whole counsel of God’s Word which teaches that racism is sin. The entirety of Scripture teaches that everyone is created in God’s image and thus precious to Him and to all who follow Him. We should not preach on racial reconciliation just once a year, but regularly make application to the truth of God’s unlimited love for “panta ta ethne,” all the people groups of the world.

Preaching the Gospel and pointing people to Jesus provides the most powerful way forward. When Paul confronted Christ on the Damascus road, a man who sought to kill the despised Gentiles became their greatest advocate and friend. Speaking of the relationship of Jew and Gentile, Paul would later write, “For He Himself is our peace, who made both groups into one and broke down the barrier of the dividing wall” (Eph. 2:14).

Second we must build friendships across racial lines that are honest and genuine. This means we should spend time together just because we are friends and family in Christ. Go to lunch together, pray together and share times together in the home. We must genuinely love one another.

As I was writing this section, it dawned on me that it would be beneficial for me to ask some of my African American friends to give me their take on what we could do together that would actually help advance the cause of racial reconciliation and make an impact for the Gospel. The following ideas are a compilation of the thoughts and ideas shared by Dr.  Ralph West, pastor of The Church without Walls in Houston, Dr. Walter Malone, pastor of Canaan Christian Church in Louisville, Dr. Terry Turner, pastor of Mesquite Friendship Baptist Church in Dallas, Dr. Toney Parks, pastor of Mt. Sinai Baptist Church, Greenville, and Dr. Paul Thompson, dean of humanities, North Greenville University. Their comments were remarkably similar and thus I have not quoted any individual but have compiled a list from their collective suggestions.

I was so moved by these practical suggestions, that I would love to help implement them and will attempt to do so whether elected or not. I am going to start by getting to know my fellow professors better.

(EDITOR’S NOTE: Ken Hemphill, 69, serves as special assistant to the president for denominational relations at North Greenville University, where prior to retirement he served as the founding director of NGU’s Center for Church Planting and Revitalization. Previously, he served as national strategist from 2003-11 for the Southern Baptist Convention’s Empowering Kingdom Growth initiative, and from 1994-2003 as president of Southwestern Baptist Theological Seminary  in Fort Worth, Texas. Also, in February, a coalition of Southern Baptists announced that Hemphill will be nominated for SBC president at the annual meeting in Dallas, June 12-13. See story here.)