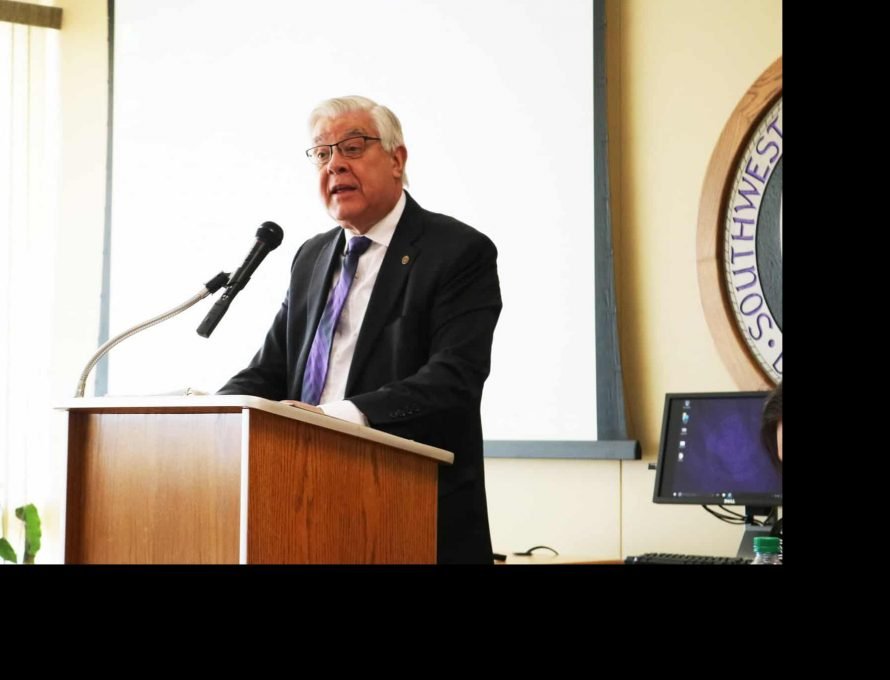 BOLIVAR – Southwest Baptist University President C. Pat Taylor expressed appreciation to SBU trustees during his final board meeting with them before retiring this fall.

“Thank you for being supportive of me and of SBU,” Taylor said, adding that he’s handed out more than 16,963 diplomas during his 22-year tenure at SBU. “It is an honor and privilege to work for you and for this great university.”

Reading Romans 12:9-8, which he also cited two decades earlier in his inauguration address, Taylor urged the board to maintain sincere love.

During their business session, trustees approved a $175,000 fundraising campaign during the board’s April 24 meeting.

The campaign is for the renovation of the Randolph Meditation Chapel, which was built in 1985, and the outdoor amphitheater space. It will be part of a larger $325,000 campaign that also includes resurfacing the tennis courts in the John A. Bryant Tennis Center.

Salem campus endowment: A $300,000 endowment was approved for maintenance of the Gott Center for Christian Higher Education on the University’s Salem campus. The endowment will be funded by combining an existing gift account for the Salem campus with the proceeds of the sale of 5 acres of land owned by SBU in Salem. The University will still owns 8 acres in Salem, which is sufficient for any possible future expansion.

Springfield campus building naming: The newest building on the Springfield Campus has been named the Wayne and Diana Hutchins Center for Nursing Education. The facility on Lark Street houses the University’s state-of-the-art Learning Resource Center and Simulation Lab that is used by students in the associate degree programs for nursing and radiography. The facility also houses classrooms that are used for the Bachelor of Science in Nursing completion program.

Retirement gift: Trustees presented SBU President Dr. C. Pat Taylor with a donor-funded gift of a new car. He is retiring Aug. 31 after nearly 22 years of leadership for the University.

Other business: Trustees set board meeting dates for 2018-19, approved an updated 5-year strategic plan, sunset the Incentive Program for Retirement that has been in effect during the 2017-18 fiscal year, approved the continuation of post-retirement benefits for the upcoming fiscal year and approved use of Future Fund earnings for a new payment gateway and student payment center software.