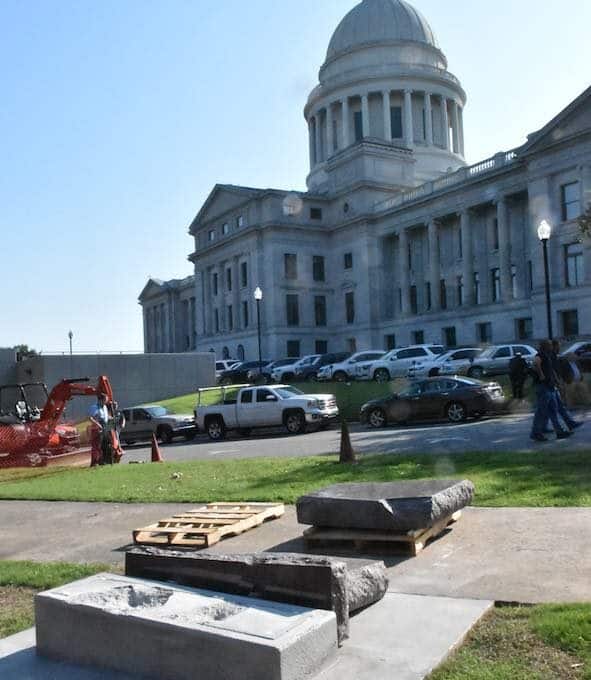 The Ten Commandments monument on the grounds of the Arkansas State Capitol lays in pieces after a Van Buren man rammed it with his car. Photo by Tim Yarbrough.

On June 27, 2017, citizens of Arkansas gathered at their state Capitol in Little Rock to commemorate the installation of a monument featuring the Ten Commandments. Less than 24 hours later Michael T. Reed II drove a 2016 Dodge Dart into the 6,000-pound granite slab, knocking it over and breaking it into multiple pieces. Reed, who committed a similar act on the grounds of the state Capitol in Oklahoma City in 2014, was arrested by Arkansas authorities and charged with two felonies and a misdemeanor.

Attacks on Ten Commandment monuments on government grounds are not unusual. In the past 15 years at least eight such attacks have occurred. One of the more highly publicized incidents took place in Montgomery, Ala., when former Alabama Supreme Court Chief Justice Roy Moore had a 2.6-ton Ten Commandments monument erected in the state building and then defied a federal court order to have it removed in 2003. His act of defiance cost him his job.

Other high-profile attacks on Ten Commandment displays on government property include:

With all these attacks on the Decalogue, I have made it my business to monitor the Ten Commandments monument on the northeast grounds of the Missouri state Capitol. You read me right. There was a Ten Commandments monument on the state Capitol grounds. While driving around the Capitol on April 17, I noticed the monument had disappeared. So I launched an inquiry.  Why was it removed? Who removed it? Where did it go? Thankfully, the answers are not sinister.

A massive landscaping project is underway on the Capitol’s northeast grounds overlooking the Missouri River. Workers safely removed the monument, taking it to a secure location where state artifacts are kept for safekeeping. State officials said the monument will return to its original location in the next 3-6 months.

With the mystery solved, I wanted to know more about the six-foot high, 31/2-foot wide granite monument. It was presented to the state by 19 Missouri aeries and auxiliaries of the Fraternal Order of Eagles, a nationwide fraternity with the goal to “make human life more desirable by lessening its ills and promoting peace, prosperity, gladness and hope,” according to the organization’s website. Some of their projects have included raising $25 million to create The Fraternal Order of Eagles Diabetes Research Center at the University of Iowa. In 1991, it was the first organization to raise $1 million for St. Jude’s Children’s Research Hospital in Memphis, Tenn. In 2006, the organization launched a nationwide effort to keep “under God” in the Pledge of Allegiance.

The Ten Commandments monument at the state Capitol was one of about 3,000 the fraternity erected throughout the nation beginning in 1954. Another 7,000 plaques were given to various local governments nationwide during the same period.

A dedication ceremony and unveiling of the monument was held on June 28, 1958. Lt. Gov. Edward V. Long accepted the gift on behalf of the state. Assisting was Jefferson City Mayor Arthur W. Ellis.

Rabbi Louis Cashdan of Kansas City, the event’s featured speaker, quoted from Exodus 19:4, “’You yourselves have seen what I did to the Egyptians, and how I bore you on eagles’ wings, and brought you to Myself.’ Science has reduced the world to a neighborhood,” he added. “But only through the Commandments can men become neighborly.”

June 28 will mark the 60th anniversary of the monument’s dedication. It would be fitting to take a moment that day, remember and give thanks to God. Why are Ten Commandments monuments such a big deal? My answer: Hebrews 4:12, “For the word of God is living and active and sharper than any two-edged sword, and piercing as far as the division of soul and spirit, of both joints and marrow, and able to judge the thoughts and intentions of the heart.”