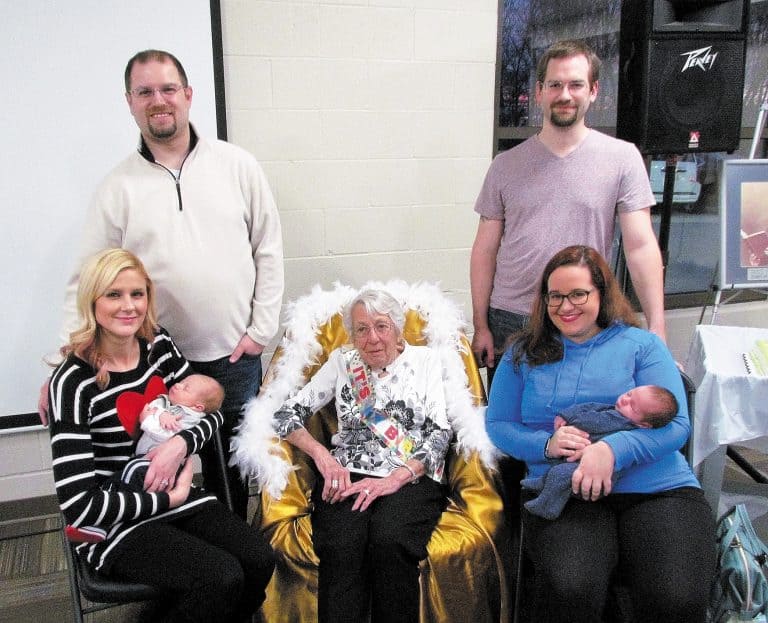 ST. LOUIS – Mary Halliburton is usually one of the first church members to arrive on a given Sunday. As she meets her pastor, John Childers, at the doors, she often has a book or magazine to give him. It’s not that the jokes in his sermon aren’t funny; it’s just that there are even funnier quips inside the pages of Reader’s Digest.

“She volunteers at the thrift store where she can get books for 25 cents,” said Childers, pastor at South County Baptist Church here. “She’s given me spiritual books, St. Louis history books and joke books; just anything that she thinks I might have an interest in. That she would do that almost every week tells you something about her thoughtfulness.”

Halliburton celebrated her 100th birthday Feb. 23. To celebrate, South County Baptist Church threw her a birthday party, complete with hundreds of guests, encouraging words and a picture of Halliburton taken with two babies who were born 100 years after her.

But just because she turned 100, doesn’t mean she has slowed down.

“I am never still,” Halliburton said.

Not only does she attend Sunday school and church faithfully every week, but Halliburton also volunteers at the jewelry counter of the Feed My People thrift store in St. Louis twice a week.

“I feel good or I wouldn’t be doing it,” Halliburton said.

“I’ve been here 13 years, so Mary was 87 when we came, and I know she’s been part of the senior adult choir, local mission trips, women’s ministry events, she sewed pillows for the hospital and she made a quilt for the Missouri Baptist Children’s Home Strawberry Festival every year,” Childers said. “She is an inspiration and an encouragement to all who know her… including me.”

Halliburton has also been part of the church’s Operation Christmas Child ministry for many years. In fact, five years ago when Halliburton was 95 she went with the group to the Charlotte, N.C., distribution center where she met Franklin Graham. Hearing there was a volunteer working that was born the same year as his father, Billy Graham, Franklin desired to meet Halliburton.

“She told me that was a highlight, for sure,” Childers said. “He even mentioned her while he spoke to the volunteers. She got her picture taken with him and then out of that meeting, Greta Van Susteren from Fox News also interviewed her.”

Childers said it’s her great sense of humor, her love of life and her assurance of heaven that makes her a great example of John 10:10 where Jesus says, “I have come that they may have life, and have it to the full.”

“It seems like I’ve had a lot of conversations lately where someone has said, ‘I’m not getting any younger and I don’t know why God keeps me around.’” Childers said. “I have never had that conversation with Mary. No way. She knows. God is still using her every day and we appreciate her heart and her love for the church.”