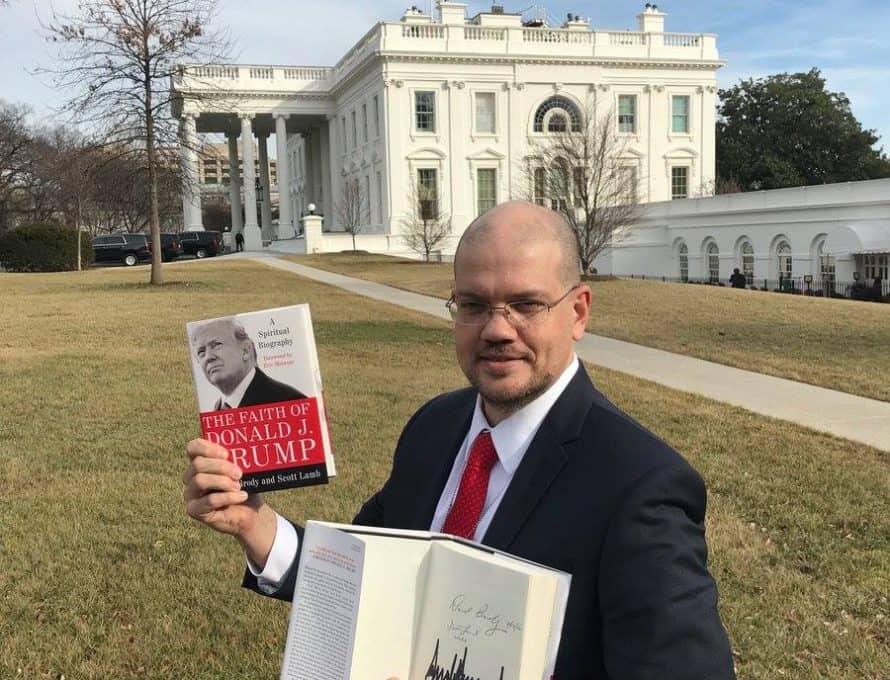 WASHINGTON, D.C. – Scott Lamb stands on the White House Lawn after presenting copies of the book he coauthored – The Faith of Donald J.Trump: A Spiritual Biography to President Donald Trump and Vice President Mike Pence. Trump and Pence both signed Lamb’s copies. Currently a vice president at Liberty University, Lamb is a former Missouri Baptist pastor and writer for The Pathway. Photo courtesy Scott Lamb

WASHINGTON, D.C. – A former Missouri Baptist pastor who began his writing career reviewing books for The Pathway is now reaching a slightly larger audience. Scott Lamb, who once pastored Providence Baptist Church, has written several biographies and is now a vice president of Liberty University. His latest book, The Faith of Donald J. Trump: A Spiritual Biography, was co-authored with journalist David Brody and was released in February. The Pathway got a chance to ask Lamb a few questions about his new book.

Pathway: Where did the idea for a spiritual biography of Trump come from? What was your initial reaction to the idea?

Scott Lamb: There is a longstanding tradition of exploring the religious background of people who become POTUS. My bookshelf is stuffed full with such volumes. Obviously, some people’s biography would be easier to write than others – given their life story. But the “easy to tell” stories are often difficult to write too – given that there is little dramatic tension in the narrative.

P: What exactly is a spiritual biography?

SL: Everyone is a theologian and everyone is religious. Some are better than others in terms of fidelity to the Bible and a robust orthodoxy. But everyone has a background that shaped their worldview – the way in which they think about God and the world. So a “spiritual biography” label simply means that there will be a particular focus on those component elements of the person’s life. It is not (at least not in the case of my book) a statement about the condition of the person’s soul as God knows it – especially if the person is still alive.

P: How many interviews did you and your writing partner conduct for the book? Who was the person you were most excited to interview?

SL: Over a hundred explicitly for the book. Several hundred when you count the background interviews that pre-date our actual decision to write this volume. Obviously, the interviews with the President and Vice President meant a lot to the success of the project.

P: You’ve said from the beginning you wanted to avoid hagiography as well as avoid speculating about the spiritual state of the President. How did you approach that, and do you think you were successful?

SL: It’s really not hard at all. You research and write the book as if it were going into the news section of the newspaper, not on the opinion page. So, in the case of the discussion about the spiritual state of the President, we say upfront in the Introduction that we, as the authors, are not going to answer that question from our own lips and opinions. We let others on both sides of that subject share their thoughts – Mike Pence being one of the strongest worded on the topic.

P: One person described Trump to you as God using an imperfect person to accomplish His perfect will. How has Trump done that in your view?

SL: God always uses imperfect people to accomplish His perfect will. Always. I’ve worked within institutional Christianity long enough to know that. Praise God for His sovereign ability and choice to use whoever He wishes. And I would say the same thing no matter what political party runs the various branches of government.

P: Who or what do you think was/is the biggest spiritual influence on the President?

SL: His father and mother – incredible people. Entire biographies will one day be written about each of them. If professional historians decide to put their own politics aside, they would see the extended Trump family as great American stories worth telling. They are sitting on the low shelf, just waiting to be written.

P: You got to present a copy of the book to the President and Vice President. Trump even tweeted about it! What was that experience like?

SL: I love history, so everything about being in the White House and the Oval Office was a memory I won’t forget. And since I pray for these people daily, it was a joy to meet them in person. The Vice President had just come from a speaking engagement in which he responded to Joy Behar’s statements (on “The View”) about Christians [calling, those who claim to hear from God mentaly ill]. And, unbeknownst at the time to my co-author and I, the tragic school shooting in Florida was still a live situation even as we were in the Oval Office. We were informed about it as we left the room.