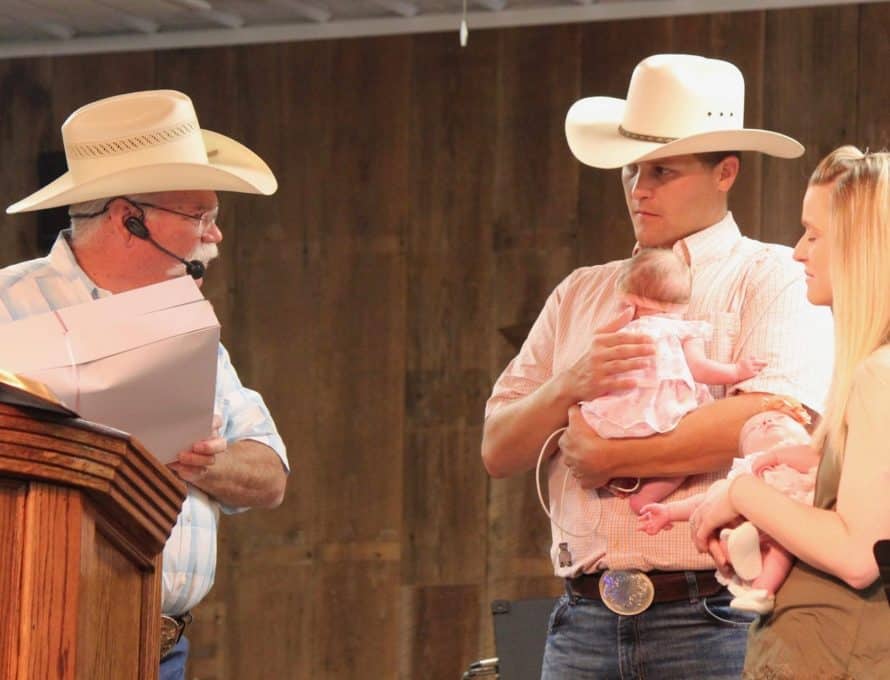 CARTHAGE – Pastor Steve Stafford (left) of Risen Ranch Cowboy Church celebrates the dedication of the twin babies of Matt and Laurel Cook last fall. Earlier in the year, Laurel came to faith in Christ at the church, but the Friday night before her planned baptism she went into labor – 73 days early. For the next 72 days, the babies fought for their lives in the NICU. But, by God’s grace, the babies are now healthy, and their mother celebrated her spiritual rebirth through baptism on the same day that the church celebrated the babies’ dedication. Photo courtesy of Risen Ranch Cowboy Church

CARTHAGE – Missouri Baptist church planter Steve Stafford has a rule for his congregation: Never steal members from other churches.

In Jesus’ parable, a shepherd left his 99 sheep to seek one stray. It’s an image that cowboys, experienced in seeking stray cattle, might appreciate. And Stafford, like other cowboy church planters around the state, is working to round up the unreached people of rural Missouri.

“We started out with four guys under a shade tree,” he said about Risen Ranch’s start in 2011. Soon four men became 15 people under a shade tree, and in the winter the growing congregation found shelter from the cold by meeting in an in-door arena. Now, because of his congregation’s eagerness to reach others, Stafford baptizes an average of 45 people each year, ranging from ages 12 to 78. And 85 percent of Risen Ranch’s members have no church background. Often, as a result, he’ll baptize family members together—as when he baptized three generations of unchurched women: daughter, mother and grandmother.

“We have bought and given away hundreds of first-time Bibles to adults – 40, 50, 60 years old – who didn’t even own a Bible,” Stafford said. “We have been able to reach a culture that has dropped through the cracks. That’s what’s exciting to me about this work and about Risen Ranch Cowboy Church.

According to Mark Fugitt, a Missouri Baptist Convention field assistant, the need to reach the people of rural Missouri is great – and the need is becoming more apparent over time.

In years past, some may have assumed that rural Missouri was “God’s country,” with a church – or possibly a few churches – in every town. But now, Fugitt said, “some of the mainline, flagship First Baptists are closing. They’re dying. They’re falling behind. That’s where we’re starting to see this great vacuum of gospel presence. You can go into towns and see three or four churches closed. Is this because they all started going to a bigger church down the road? Or is this because, in a lot of towns, they just closed and nothing stepped in to take their place?”

Although not every rural Missourian is a cowboy, Fugitt said that Missouri Baptist cowboy churches are playing an important part in bringing the gospel to the rural population.

For this reason, Risen Ranch Cowboy Church meets in an untraditional building, adjacent to an outdoor arena where they host an annual “Horsemanship Bible Camp”—their version of VBS—and rodeo events for outreach. On entering Risen Ranch’s building, one visitor told Stafford that it looked like his machine shed with chairs in it. “I can do this,” he added. Other visitors are excited to learn that dogs are welcome in the building.

But according to Stafford, this isn’t the main reason why Risen Ranch and other cowboy churches are able to reach unchurched rural Missourians.

“We started this church by meeting them where they’re at – at the stock yards, at the rodeos, at horse shows, at county fairs,” Stafford said. “We took the church to them before we ever invited them to come to the church. … That is our mindset – taking the gospel out.”

Indeed, Risen Ranch has been active in multiplying churches across Missouri and around the nation and globe. Former members are now heading up church plants in Illinois and Kansas, and Risen Ranch sends a team each year to Keensburg, Colo., where they help with a rodeo Bible camp. They’ve also sent a short term mission team to Peru to minister alongside 15 church planters there.

“Our goal is to get more globally-minded,” Stafford said, adding that the church is also “able to reach a lot of people without meeting them through the Cooperative Program.”

The Cooperative Program is the funding process Southern Baptists have used since 1925 to support missions and evangelism at the state, national, and international levels. Through Cooperative Program, Missouri Baptist churches are multiplied, revitalized and mobilized to transform lives and communities around the world.

Stafford expressed his gratitude to Missouri Baptists for supporting the Cooperative Program.

But the impact of the Cooperative Program goes beyond resources, he said. The impact is seen in the transformed life of a 53-year-old unchurched, rural Missourian who once called Stafford and, with excitement, shared that he had just bought his first Bible.