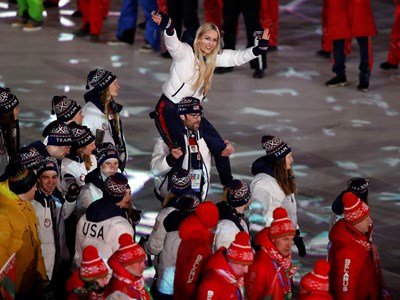 PYEONGCHANG, South Korea (BP) — The extinguished Olympic torch on Sunday officially ended the 2018 Winter Olympics. And for some Christian athletes, this year’s games were especially sweet — but they seemed to keep their wins in perspective.

U.S. freestyle skier and gold medalist David Wise had the words “I cannot fail because it is not my victory” written on his sleeve during the competition.

“That is my way of reminding myself I am not here to glorify myself,” Wise said. “I am put on this planet to glorify God. He made me with the ability to do what I do, so when I drop into the halfpipe, I cannot fail.”

Wise (featured previously in Baptist Press), who won gold in Sochi in 2014, successfully defended his gold medal in the men’s half-pipe event, scoring 97.20 to edge his U.S. teammate Alex Ferreira at 96.40.

The first two of Wise’s three runs were far from gold-medal quality, with Wise falling and his skis coming off. He needed a big performance in his third and final run to capture the gold.

“What this group has been able to accomplish is way beyond sport, and that is something that is never going to fade,” Marvin said about winning the gold in her third Olympics. “Take a picture of my face because a picture is a thousand words. I don’t know what else to say other than joy.

“(This is) a snapshot of everything we have been through,” she continued. “I could sit here and speak for hours on what my team is all about. That is priceless, and it means so much to do it together and come out on top.”

But for those who didn’t enjoy similar golden moments, especially those athletes who profess faith in Christ, the competition results aren’t the ultimate measure of their success.

“I know that regardless of what I do on the track, that I’m still loved by God and that it takes every single pressure away — because I know God is giving me success,” Canadian skeleton racer Elisabeth Vathje said (she finished ninth overall). “But I know that even if the success doesn’t come, it doesn’t change the way God sees me and the way I should see Him.

“So, it gives me peace in that I don’t have to fight for results for my worth.”

The next Winter Olympics will be held in Beijing, China, in 2022. Tokyo, Japan, will host the 2020 Summer Olympics.