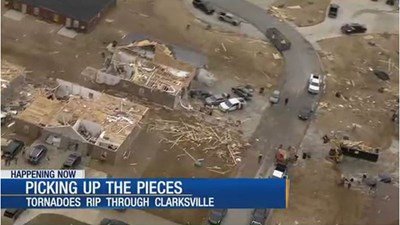 CLARKSVILLE, Tenn. (BP) — Southern Baptist disaster relief volunteers are on the ground and others are on standby after weekend tornadoes and flooding killed five people and damaged homes in five states.

Two disaster relief teams have been deployed in Tennessee; Illinois is assessing a response to flooding there; and teams are on standby in Kentucky, Missouri and Ohio, according to reports from state DR representatives and the North American Mission Board (NAMB).

About 25 volunteers were operating chainsaws and applying tarp to damaged homes in Clarksville, Tenn., today (Feb. 26) after EF-1 and EF-2 tornadoes damaged Clarksville and Dotsonville Saturday, said Steve Dusenberry, a Cumberland Baptist Association (CBA) DR unit director. Two people were injured in Clarksville, but no tornado-related deaths had been reported in Tennessee this morning, according to the National Weather Service (NWS).

Community members within and outside the church have selflessly responded in Tennessee, Dusenberry told Baptist Press.

“Contractors and churches and just volunteers have come out in droves to help clean up … not looking for anything in return,” he said. “I thought that was a great time. Volunteer upon volunteer was out there, neighbor helping neighbor.”

At least two other disaster relief units are en route to Tennessee communities, including students from Austin Peay State University in Clarksville, and others are on standby in Tennessee, said Dusenberry, who hopes he can complete the response by week’s end.

A third tornado touched down in Tennessee, in extreme northern Robertson County, before gathering strength and killing a 79-year-old woman and injuring her husband at their home in Logan County, Ky., as an EF-2, NWS reported Sunday.

The elderly woman was among three total deaths in Kentucky, including two people whose bodies were recovered from flood-submerged vehicles in separate incidents in Simpson and Henderson counties, the Associated Press reported Sunday. Other deaths were reported in southwestern Michigan, where a 48-year-old man drowned in floodwaters, and in Arkansas, where an 83-year-old man died when high winds blew his trailer home into a pond, government representatives told the AP.

Coy Webb, DR director with the Kentucky Baptist Convention, has DR teams on standby as he prepares to assess damage after flood waters recede, he told NAMB this morning.

“Waters are still up in Louisville, Shepherdsville and northern Kentucky,” Webb said in written comments. “Daviess County is further west … so it may be a few days before we know if they will get significant flooding.”

Responses are considered probable in several communities, including downtown Louisville, Shepherdsville in Bullitt County and the northern Kentucky counties of Kenyon, Campbell and Boone.

Tornadoes, heavy rains, strong winds and flooding were reported in a diagonal line of storms that stretched from northeast Texas to southwest Ohio, according to NWS reports.