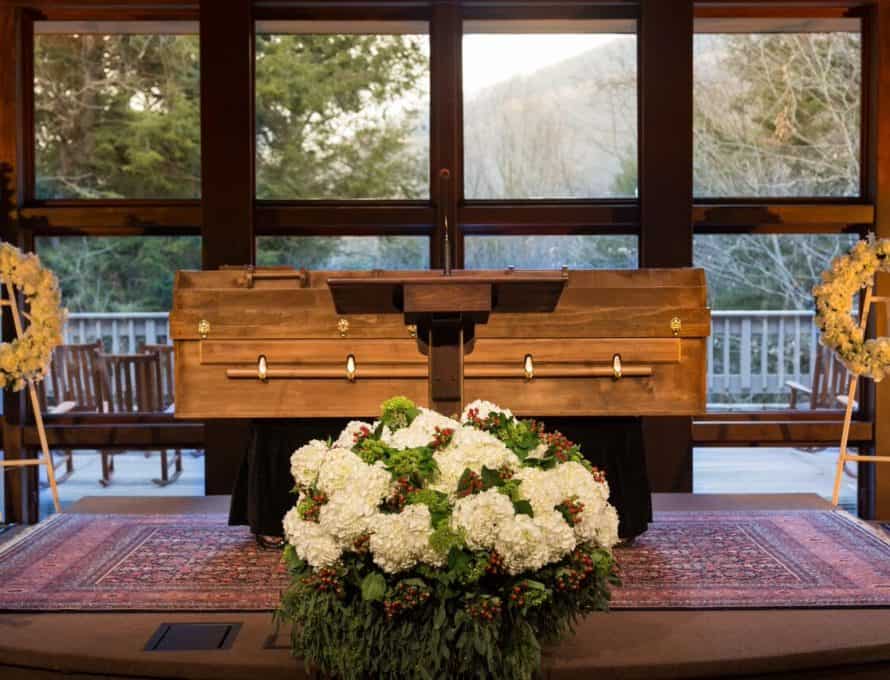 MONTREAT, N.C. – The body of Billy Graham rests behind a pulpit at The Billy Graham Training Center at The Cove in Asheville, N.C. Billy Graham Evangelistic Association photo.

MONTREAT, N.C. (BP) – The late beloved evangelist Billy Graham, who ministered to both the disenfranchised and the most powerful, will lie in honor in the U.S. Capitol Rotunda in a pinewood coffin fashioned by prisoners’ hands.

The Feb. 28–March 1 viewing will mark only the fourth time a private citizen has been so honored, and puts Graham in the company of a legendary list of 11 U.S. presidents and 20 esteemed leaders and others who have lain in state or in honor in the rotunda, the Billy Graham Evangelistic Association (BGEA) said Feb. 22.

Graham, who died Feb. 21 at age 99, will be placed in a handmade plywood casket with a wooden cross nailed on top, built by inmates of Louisiana State Penitentiary at Angola, BGEA announced. Graham’s son Franklin ordered the coffin when he saw the prisoners’ handiwork during a tour of the facility, the largest maximum security prison in the nation. Graham’s late wife Ruth was also buried in one of the handmade coffins upon her death in 2007.

The Angola prison is the site of an extension center of the New Orleans Baptist Theological Seminary/Leavell College that has trained inmates in ministry the past 22 years, offering the Bachelor of Arts in Christian ministry and non-credit certificate degrees. Grace Baptist Church, a Southern Baptist church among 28 inmate-led congregations on the vast prison campus, is a member of the Washington Baptist Association.

In a second opportunity for public attendance, Graham will lie in repose in a closed casket from 8 a.m.–10 p.m., Feb. 26-27 at the Graham family home place in Charlotte, next to the Billy Graham library, BGEA said.

Graham’s family has announced a private funeral service March 2 at noon in a tent in the Billy Graham Library parking lot, followed by a private interment service in the library prayer garden. There, Graham will be buried at the foot of a cross-shaped walkway. More than 2,000 individuals will receive personal invitations to the funeral, according to news reports.