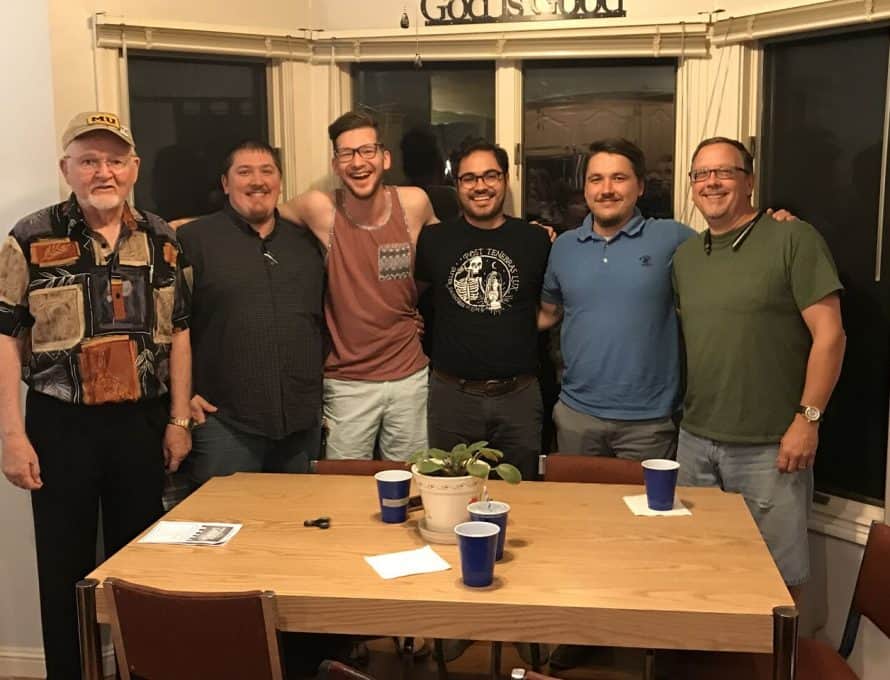 SPRINGFIELD – Jim McCullen's ministry legacy has been picked up by descendants. From left are McCullen, grandsons Brandon Dodd and Guy Batton, grandsons-in-law Eric Barroso and Joshua Jenkins, and son-in-law Kevin Dodd. All are in ministry or have surrendered to the call to preach. Submitted photo.

SPRINGFIELD – Jim McCullen couldn’t have possibly known his rededication to the Lord some 60 years ago would lead to ministry that has carried to several generations.

“I was 20. I thought I was a Christian. Then one of my pretty close friends, James Mason, was killed in a car wreck. When I passed by his casket, it was almost as if he was saying, ‘McCullen, if you are a Christian, how come you never told me about Jesus,” McCullen said.

The incident rocked him and forced him to re-evaluate his life.

“It bothered me in the night. I asked myself about it, and the only conclusion I came to was I wasn’t a Christian. I had the knowledge in my head, not my heart.”

At a Wednesday prayer meeting, Jim asked his pastor if an invitation was going to be offered. The pastor hadn’t planned to do so. McCullen said, “If you do, I’m coming forward.” The pastor offered it, and McCullen committed to Christ.

“Shortly after that I thought about preaching. The pastors I knew had college or seminary. I didn’t care for school. I dropped out of my second year in high school. If I was going to preach, I needed to get education. Finally, I surrendered to preach. I passed my GED, went to Missouri Baptist College, and then went to seminary at Southwestern Baptist Theological Seminary in Ft. Worth Texas. It took me 12 years to get my college degree.”

When McCullen was called to preach, he told his mother, thinking the news would jolt her. She said: “I’m been praying since you were four years old that God would do something with your life, since I messed up my life.”

He went to California to pastor a church and found that Golden Gate Baptist Theological Seminary (now Gateway Seminary) needed students. McCullen was recruited for a doctorate.

McCullen and his wife Christa had two daughters. But fast forward to the grandchildren.

“Our first grandson, Brandon, stayed with us for a while in West Virginia. We were really close. After nursery, he would come to the sanctuary and say, ‘Sit down papa, I want to preach to you.’

Still as a child, Brandon had told a teacher he wanted to pastor like his grandfather. The teacher told McCullen, and he asked Brandon about that. Said Brandon: “Yeah, I didn’t think she’d know what a Ninja Turtle was.”

As Brandon grew, he felt called to ministry, served as McCullen’s youth pastor, and since has spent almost a decade in ministry.

Brandon’s father, Kevin, has spent almost 25 years in ministry, but was connected to his first pastorate via his father-in-law.

And there’s more. McCullen’s second grandson, Guy, has surrendered to preach, as has a grandson-in-law Eric. Finally, his grandson-in-law Joshua (a pastor’s son) has served in pastoral ministry for over 4 years.

“It does the heart good, to have so many in ministry. I ask ‘why am I so blessed?’”

In addition to over 50 years of ministry, Dr. McCullen has written the Sunday School lessons for all 15 years of The Pathway.