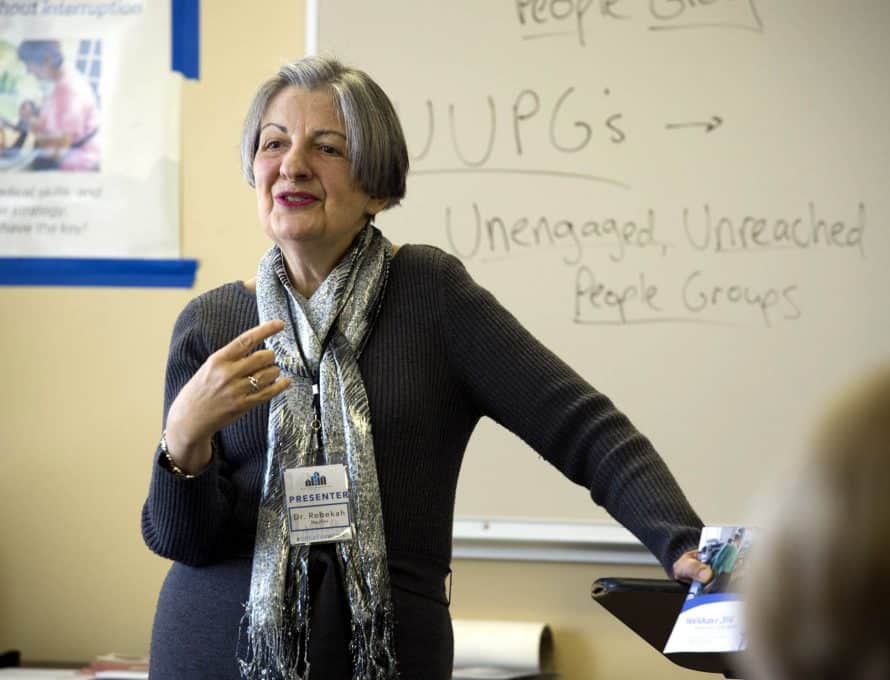 GERMANTOWN, Tenn. – Rebekah Naylor remains active in medical missions and ministry. In this 2014 photo, she discusses medicine’s potential to spread the Gospel globally during a Missional Marketplace Summit sponsored by Germantown (Tenn.) Baptist Church in partnership with the International Mission Board. BP file photo.

NASHVILLE (BP) – Decorated surgeon and missionary Rebekah Naylor, who heard God’s call to medical missions at age 13, never longed for marriage and motherhood. She simply left the details of her life up to the Lord, she told Baptist Press just shy of her 74th birthday.

“I think it is vital that we not put qualifications on God’s call,” said Naylor, who celebrated her birthday on Jan. 2. “It cannot be that I agree to respond to God’s call to missions provided He gives me a husband or sends me to a particular place.

“Total submission to Him is essential,” she noted. “Then the promise is that He will direct our paths. I have experienced that over and over.”

The Southern Baptist international missionary was uniquely single in Karnataka, India, where God’s call allowed her to thrive.

“In India a single woman is rare,” Naylor said, “but because I was a foreigner and a professional and respected, it was not a real problem. I used my home much for hospitality and socializing.”

Graduating from the Vanderbilt University School of Medicine, and completing residency at the University of Texas Southwestern Medical School, she entered international missions in 1974 at age 30. She began through the Foreign Mission Board (now the International Mission Board) as a surgeon at Bangalore Baptist Hospital in Karnataka’s capital city, and in 10 years rose to the rank of medical superintendent.

To her lasting credit is the Rebekah Ann Naylor School of Nursing she founded, adjacent to the Bangalore hospital, that has trained more than 350 nurses. She helped plant 90 churches during her 34 years of medical and spiritual ministry there.

She’s never felt a need to justify her singleness, nor has she meditated at length on Paul’s teachings on the gift of singleness and its benefits in I Corinthians 7:7, and 7:32-34, she told BP.

“I just did not ever dwell on this. And I never really thought a lot about the passage in I Corinthians nor tried to apply it,” she said. “It is certainly true that as a single I could do so much more in ministry and work and maybe that is part of what Paul was saying.”

Returning to the U.S. in 2002, Naylor retired in 2010 after nearly 10 years as clinical associate professor of surgery at the University of Texas Southwestern Medical Center in Dallas. She helped found a free medical clinic the next year, Mercy Clinic, in nearby Fort Worth. The American College of Surgeons awarded her the 2016 Pfizer Surgical Humanitarian Award for her success.

Naylor responded to a few questions from Baptist Press in November on her lifelong singleness.

BP: When you entered the mission field, what expectations did you have of your personal life as a foreign missionary? Did you have dreams of a husband and children?

Naylor: I don’t remember expectations regarding personal life. I was totally focused on the work to which God had called me. I was 13 when God called me into medical missions. I dated only occasionally and would not consider a relationship with anyone who might deter the call from God. And I was studying and working very hard and long hours and had done that for years, so I figured my life overseas would be more of that, only in a different location and cultural context.

BP: When, if ever, did it become apparent to you that you would remain single for much of your life? Did you refuse any proposals? Were there memorable suitors?

Naylor: I did not refuse any proposals. I figured that once I went overseas, likely I would not have opportunity to meet anyone.

BP: Do you see marriage as yet a possibility or probability for you?

Naylor: I never think about it. For all of my life, I have trusted God in this. I figure if He ever wanted me to get married as part of His plan, He would bring the person and also show me. I have been and am now quite happy and comfortable with that and so there is no need to spend time and energy thinking about it. I want whatever God wants for my life.

BP: Did you ever wish God had willed for you to marry and have a family while also enjoying a successful ministry career?

Naylor: I could never have done what I did for years in India with family responsibility. I would have missed many marvelous privileges.

BP: What have been the greatest advantages and disadvantages of serving God as a single woman?

Naylor: Advantages – more opportunities to minister with Bible studies and church work outside of work, able to invest in hospital leadership roles, able to invest more in people. Disadvantages –  separation from family, which is not unique to singles but different [with] more long-lasting effects in retirement years.

BP: Did your singleness affect the way you were perceived on the mission field at home and abroad?

Naylor: People’s perception depends on earning their respect and trust, and I was able to do that in both cultures. I am not sure being single has anything to do with that. ν