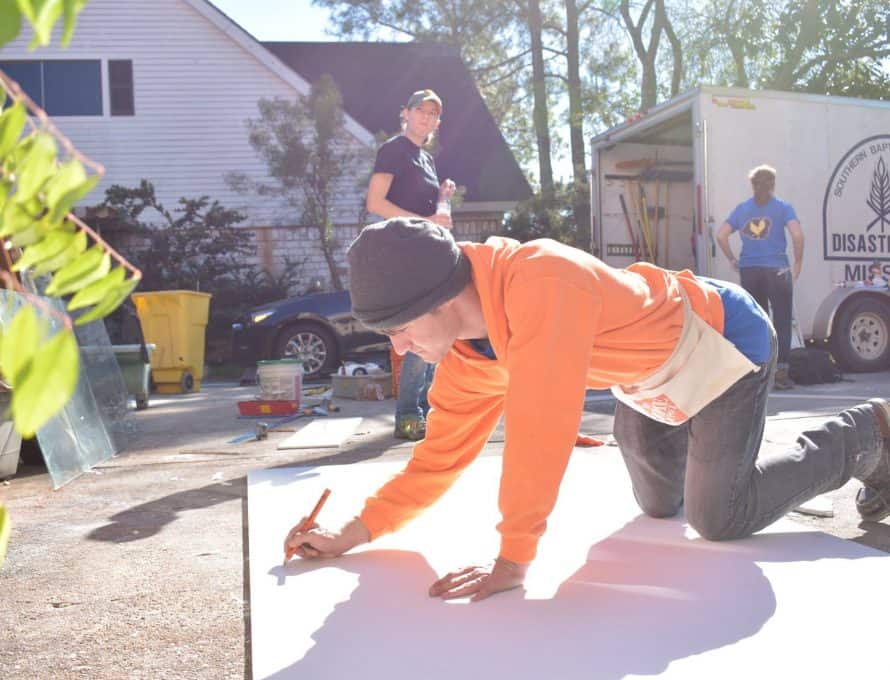 HOUSTON -- Missouri Southern State University student Nathan Hill measures a sheet of drywall for installation in the home of a Muslim family in Houston during the rebuild effort that began during Thanksgiving break in November.

HOUSTON – Turkey and all the fixings on the table at grandparents house in late November.  Nope.  For students in Baptist Student Union groups across Missouri and several other states, it was a trip in church vans to Houston, Texas, to begin the rebuilding process for homeowners who were hit hard by Hurricane Harvey.

“Our task was to begin rebuilding the homes in Houston.  The mudout crews had been there and completed their work. Now Texas Baptist Men were starting the rebuild phase,” Banderman said.

“We sent them to University Baptist Church, Houston to work on 6 homes, primarily installing insulation and drywall.”

Michael Updegrave, age 25, was one of the crew leaders.  He is a registered nurse in Springfield and a graduate of Southwest Baptist University.  He said it was his 7th deployment since getting trained in DR ministry during his university days at SBU.  He has been on callouts  to Nepal (with Baptist Global Response), North Carolina, Diamond (Missouri), St. Louis and now Houston.

“There was a lot of water damage and mold.  People were still living in these houses.  We helped with the Texas Baptist Men efforts hanging drywall.” Updegrave said.

“I enjoy working with people my age. There were students there from all over the U.S. There were international students as well.”

Updegrave added, “We helped minister to a pastor who had been flooded out. And we helped a Muslim family and at the end we were able to present a Bible and pray with them.  Everything that could have gone wrong at that house, did. But God opened doors for us to minister to them as we repaired their home.”

Camille Wilson, age 20, said she has been going on DR callouts since she was 14. Her uncle is Jerry Palmer, the head of the MBC DR communications team and a director of missions in Heartland Association, Lawson.  She went with him to observe him operate the communications trailer during the Joplin tornado in 2011.   Since then she finished school and moved to Rolla to study at Missouri S & T.  During this past summer she was an intern on the MBC collegiate DR team.

“It was a slow summer,” she said.  “We had a flood recovery project at Pacific and then we did some chain saw work and some help with churches the rest of the summer. Joe helped us find some jobs around the state.”  All of the interns were wanting more action.

But Wilson remarked the interns were eager to go to Houston when the hurricane hit just after their fall semesters began.  So at the Thanksgiving break they headed south.

Wilson said she liked “seeing how we were helping to remind them (the victims) that they are not alone.”

Banderman said he and former MBC DR director, Dwain Carter, dreamed of a team of young people who would catch the vision for DR work to come alongside those who are they veterans of DR work in Missouri.

“It was nice for Dwain and me to sit at a table and discuss how a lot of time and money had going into this effort to build up the next generation of leaders in DR.”

“For this ministry to continue we need to train our replacements,” Banderman added.

Some of the students on the trip had just been trained in a recent conference in Sikeston.  This was their first opportunity to use their new skills.

Elliott Sutton, from Leadwood, Missouri, has served as a summer intern for two years.

He said their Missouri S & T campus missionary, Bruce Wade, announced the Thanksgiving trip opportunity at the BSU at Rolla. Sutton said they were thrilled that 18 students signed up immediately.  “The year before we sometimes didn’t have 16 students at the BSU, but we’re doing better this year.”

He said their group ministered to a 70 year old widow, Doris Crowson. Her husband had passed away about the time of the hurricane this fall.  She was a believer and was grieving the loss of her husband but also the damage to her home.  When the team concluded their work she said “The house will be quiet again” and began to cry. The students prayed for her and the team assured her they will miss her too.

“She was a sweet lady,” Sutton said.

Banderman said these are the kind of experiences he hopes the next generation of DR workers will continue to catch.  He believes the future is bright for DR ministry.