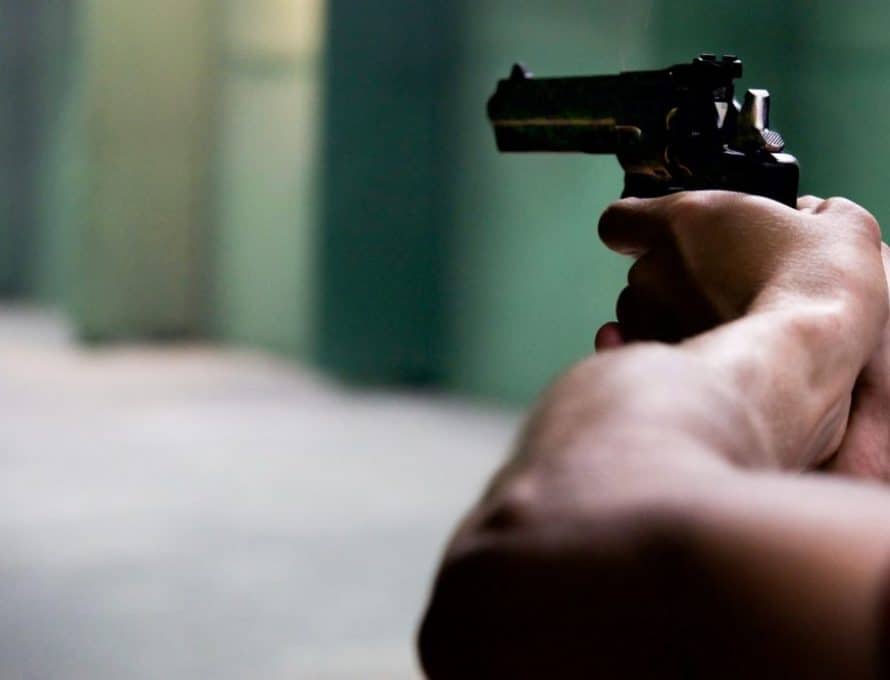 EDITOR’S NOTE: This story has been edited and updated, having run previously in the Oct. 8, 2013, edition of The Pathway.

NORWOOD – Pastor Stephen Fugitt believes that churches have the right to arm themselves for the day when a gunman enters their buildings to do harm. Yet no one had time to open fire against a gunman who aimed his .357 magnum revolver at Fugitt as he preached to his congregation at the First Baptist Church, Norwood, July 21, 2013.

Instead, one church member grabbed the gunman’s arm, causing his first shot to hit the ceiling, while other men helped to wrestle him to the ground. They held him there until police arrived, and no one was seriously injured.

According to a Christianity Today report, 115 instances of such church violence occurred in the United States in 2012, compared to only 10 a decade earlier. Church shootings, the report added, remain less likely than a person being struck by a bolt of lightning. Even so, when church violence strikes, people have no time to think, but only to react.

“Missouri law allows churches to make these kinds of decisions,” Fugitt said. “Initially, I would say that if a person is considering the use of armed protection, they should be trained. I believe it’s biblically defensible to protect members and others attending our services and events. In my view, it’s one thing if God calls us to martyrdom, but if we can defend innocent lives, we should.”

“When someone walks into your church and starts shooting,” he added, “you don’t have time in that moment to develop a theory on the matter. It’s better to have processed your thoughts about this ahead of time.”

Various Christians, however, have developed conflicting theories about the use of weapons in church security, said Vaughn Baker, president of Strategos International and lay leader at Abundant Life Baptist Church, Lee’s Summit. Baker said that Strategos International always defends the right of churches to protect their members and visitors from violence.

“There is a big difference,” Baker responded, “between being a martyr and being a victim.”

Such a difference indeed exists, according to church historian John Mark Yeats. Christians in the United States, he said, face church violence in a context that differs greatly from what many Christians have faced throughout history and, currently, throughout the world.

“The primary goal has to remain that the gospel is for all,” Yeats said, adding that Southern Baptists should also strive as much as possible “to preserve life.”

The sanctity of human life, in fact, should serve as the bedrock for Southern Baptists’ church security plans, ethicist J. Alan Branch said.

“I have a right – in fact, I think a mandate – to defend innocent human life,” said Branch, professor of Christian ethics at Midwestern Seminary and chaplain in the United States Army Reserves. “If someone comes to me and they are trying to assault my family, I have a moral obligation to try to stop that person and defend innocent humans—namely, my family. I have a mandate from God … to protect my wife and my children, up to using physical force when necessary.”

Similarly, church members “have the right to live,” and no one has the right to take their lives, Branch said. “If someone is breaking into the church and is there to hurt and kill and maim innocent people—little boys and girls and men and women who are coming there to study about Jesus—you have got to stop them.”

Although churches have a right to defend innocent humans, Christians can by no means pursue vigilante justice, Branch added. According to Romans 13, God has instituted the government to administer such justice.

Even if churches that want to use armed security do not have access to officers of the law, they must appoint only those who are well trained and committed, said Rob Quillin, pastor of First Baptist Church, Kahoka, and a retired Kansas City police officer.

Members of a church’s security team should train at least monthly, recognizing that “shooting is a perishable skill.”

“I can tell you from being involved in shootings that you may be a 100 percent shooter on a range, but when somebody is shooting at you, you may immediately turn into a 30 percent shooter or a 40 percent shooter,” he said, adding that when church violence occurs, it will come suddenly in a confined