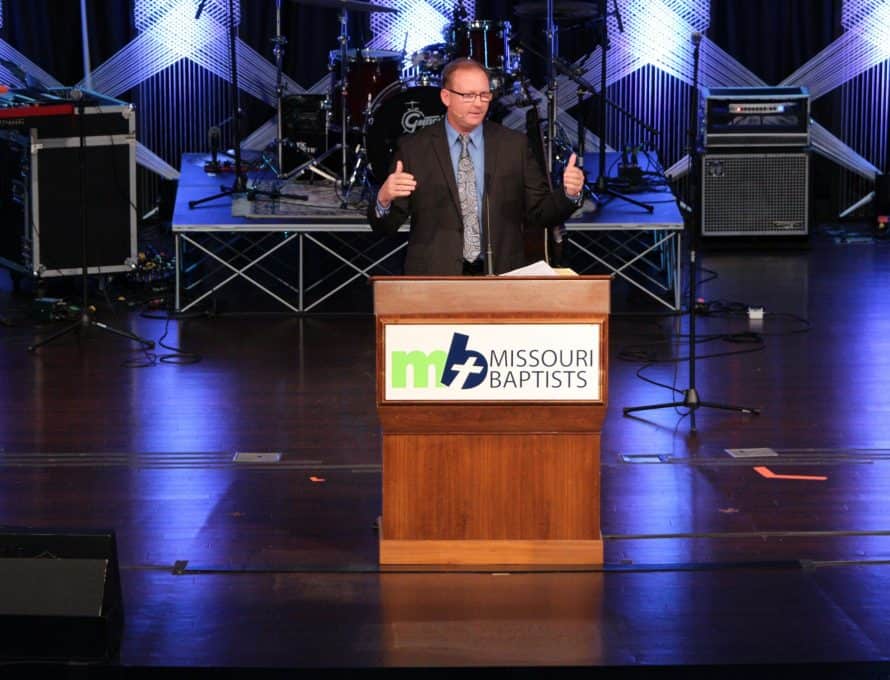 RAYTOWN, Mo. – Missouri Baptists pursued greater synergy for transforming lives and communities with the gospel during their 183rd annual meeting.

A total of 883 messengers and 234 visitors from 391 churches gathered Oct. 23-24 at the Connection Point Church (formerly First Baptist) of Raytown, Mo., where they approved new governing documents, heard a report from the Missouri Baptist Foundation President for the first time in 15 years and welcomed special guests, including Missouri Gov. Eric Greitens.

“Missouri Baptists, we’re better together,” Missouri Baptist Convention Executive Director John Yeats said in his address to the convention. “That’s the gist of synergy: people can accomplish more together than separately.

“The secret to godly synergy is loving one another instead of ourselves,” he added, reminding messengers of Christ’s command to love one another. Yeats said that Lord’s mission to transform lives and communities around Missouri and across the globe demands such synergy.

Encouraging Missouri Baptists to lay aside worry and take up holiness, MBC President Ken Parker likewise called them toward synergy for the advance of God’s kingdom.

“We don’t have the luxury of fighting over secondary issues today. Those days are gone,” he said, adding, “This is not a time to throw stones, but to exchange casseroles.”

With an overwhelming – and, perhaps, unanimous – vote, Missouri Baptists approved a newly revised set of governing documents, including the MBC Constitution and Bylaws, the Executive Board Articles of Incorporation and Bylaws, the MBC Business & Financial Plan, and other legal documents.

In 2014, the MBC Executive Board appointed a task force to review all of the convention’s governing documents. After the task force completed its work, the revised documents were approved by the MBC Executive Board and then were formally received by Missouri Baptist messengers at the convention’s 2016 annual meeting. During the past year, the documents were open for review and comment by all Missouri Baptists. Approval of the documents by MBC messengers at the 2017 annual meeting concludes the revision process.

Only one week after stepping into his role as president of the Missouri Baptist Foundation, Neil Franks shared his excitement for a growing synergy between the MBC and the Foundation.

Franks, previously the senior pastor of First Baptist Church, Branson, and a former MBC president, was named as the Foundation’s new president in September. This news came nearly one year after the Missouri Supreme Court restored the Foundation to governance under a Board of Trustees chosen by the MBC, ending roughly 15 years of litigation and renewing the partnership between the MBC and the Foundation.

For the first time in nearly 15 years, Franks brought a report from the Foundation to MBC messengers and offered to speak at churches throughout Missouri to help rebuild the Foundation’s relationship with Missouri Baptist churches.

Franks also presented MBC Executive Director Yeats with a check of $140,245.41 benefitting the Cooperative Program. This amount represents a partial-year net income distribution from various endowments and trust funds owned and managed by the Foundation. Although the MBC has received a distribution of funds quarterly from the Foundation for decades, Franks presented this check to Yeats at the annual meeting as a symbol of the Foundation’s restored relationship with the MBC.

In his address, Greitens affirmed his commitment to protect the unborn and to defend religious liberty, and he invited Missouri Baptists to join him in doing so.

Afterward, MBC President Ken Parker led messengers and guests in prayer for the governor and his family, and the MBC presented the governor with a specially framed picture of fireworks exploding above the Missouri State Capitol that was photographed by Steven Strauch, director of missions for the Laclede Baptist Association.

Other special guests during the convention included Tom Elliff, former president of the International Mission Board; Kevin Ezell, president of the North American Mission Board; as well as Judy Dabler, founder of Creative Conciliation, who led two sessions about conflict resolution and the personal and spiritual health of church leaders.

Additionally, Convention Preacher Kirk Baker, pastor of First Baptist, Camdenton, exhorted Missouri Baptists to show through their lives – without any hypocrisy – the faith and love that God has placed in their hearts.

Also, they took a special offering, Oct. 24, to benefit the Restoration House, a ministry supported by the Blue River-Kansas City Baptist Association that rescues and extends God’s grace to victims of sex trafficking.

Messengers also approved a five-year state-to-state missions partnership with the Minnesota and Wisconsin Baptist Convention, beginning Jan. 1, 2018 and ending on Dec. 31, 2022, unless extended with the approval of both state conventions.

Additionally, Missouri Baptists approved resolutions showing appreciation for recent pro-life and pro-religious liberty legislation in Missouri, as well as one resolution calling churches to endorse adoption and orphan care and another resolution on the 500th anniversary of the Protestant Reformation.

The 2018 annual meeting of the Missouri Baptist Convention is scheduled for Oct. 22-24 at Crossway Baptist Church in Springfield, Mo.

To listen to the various sermons and addresses presented at the 2017 MBC annual meeting, visit https://mobaptist.org/annual-meeting.