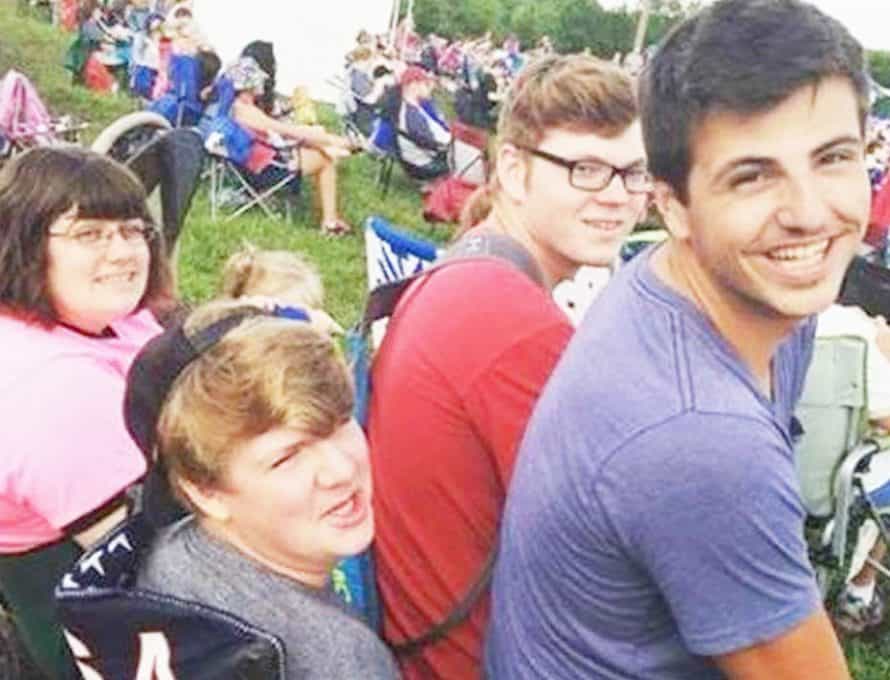 TRENTON  –  Sunday morning services at Coon Creek Baptist Church had just ended, and Mike Knapp wanted to get the cattle fed before the family gathered together for lunch.

His teenaged son, Malachi, got into his truck and decided to lend a hand.

“He was always worried about me and wouldn’t let me go anywhere without him checking up on me,” Mike said.

A quarter-mile from the house, a white car came zooming down the hill, fast enough that Mike swerved his tractor off the road, thinking, “Man, there’s a lot of Sunday drivers out today!” He crested the hill, and the next thing he knew, something hit his tractor, knocking the front end off.

Mike got out of the tractor and instantly recognized the crumpled white truck that belonged to Malachi, the bale stabber from the front of the tractor jutting through the driver’s side windshield.

“I started yelling his name, but couldn’t seee him or get him to respond,” he said.

Mike ran around to the other side where, despite wearing a seat belt, Malachi had been thrown out of the path of the bale stabber. Mike pulled the bloody teenager out of the truck, not concerned about broken bones or serious injury.

The white car turned around and came back, and gave the two a ride to the house. Malachi went to the hospital to get checked, but ultimately he was fine. Reviewing what had happened and marveling at how God had spared him, Malachi, who had previously walked an aisle asking to be saved, truly accepted Christ as his savior at church camp later that summer.

That was three years ago.

Four months ago, just seven miles from home, Malachi, two of his siblings and a friend were on their way home from a day’s adventure when their SUV ran off the road and came to rest hidden in a culvert. Malachi, 18, Micah Knapp, 31, Matheson Knapp, 19, and Trey Shaw, 20, lost their lives instantly. The details and circumstances aren’t pretty. To listen to the Knapps’ father and mother, Sherry, explain how they found the crash site after hours of searching only to confirm their worst fears is heartrending. To say goodbye to a loved one is difficult, and burying a child is even more so. Letting go of three kids plus a dear friend all at once is all but impossible.

And yet, in the weeks since that day in June, the short lives of Shaw and the three Knapps are still making an impact for the Kingdom and the Lord to whom all four were committed.

All four of the Knapp children – including sister Maerissa, 28 – were in the pew at Coon Creek Baptist Church nine months before they were born and every Sunday thereafter.

“We made sure of that,” Mike said.

But even the most godly and prayerful parents can’t force their children into accepting Christ’s gift of salvation. Micah, their oldest, “was right on target” when she became a believer at seven. Even at that young age, her parents said they could see that her faith was real and genuine. The same was true for their younger daughter, Maerissa.

Matheson and Malachi on the other hand, had each walked an aisle, prayed a prayer and made a profession of faith simply because they knew it was something their parents wanted them to do.

“Later we got to see them both accept Christ not because of us, but because it was something they wanted to do, and we got to see a change in those boys’ lives,” Sherry said.

Christina Boatwright, the Missouri Baptist Convention campus missionary at North Central Missouri College, led Micah, Malachi, Matheson and Trey on various mission trips, and got to see the transition in the boys’ lives as well when they truly accepted Christ, as well as Trey’s baptism.

“They were the most loving and welcoming people you’ll meet,” she said. “They brought a lot of life and energy to the BSU and were always ready and excited. The Knapps were loud and excited about life. Trey kind of helped calm them down. They all tried to make sure everyone felt loved and included and treated you like family. As I watched them all come to Christ, their expressions of love only grew deeper. It was so fun to watch that happen.”

With their salvation sure and their life changed for real, all four of the Knapp children and Trey committed themselves in some way toward missions and serving God. Micah spent time on the mission field in Romania, and Malachi and Matheson went on mission trips to Canada and Florida with the NCMC Baptist Student Union. All three boys worked with the youth at their church and Malachi was preparing to serve as a Missouri Baptist Convention summer missionary this summer. Trey was a former summer missionary and both he and Malachi felt called to ministry. Micah, too, had previously served as a summer missionary and was a student at Midwestern Baptist Theological Seminary. Maerissa was and continues to be a teacher to missionary children in Nairobi, Kenya. They all shared a reputation for not being shy about their faith and being willing to share Jesus with anyone.

Malachi in particular was revved up from the summer missionary training he’d just received at Hannibal-LaGrange University. “He told me all about the preaching and testimonies he’d heard and I could see a glow about him,” Mike said. “It was exciting.”

On the night of the wreck, Knapp didn’t want to leave them at the funeral home; he wanted them back in his home.

“The Lord spoke to me and said, ‘Boy, you are a selfish man.’ When visitation came at the funeral home, I knew why they couldn’t be at my home. 1,600 people came to see them.”

More than 500 people were at the funeral – a testament to the way God had been working and continues to work in their lives for His glory.

“I still struggle, Mike said. “Grieving is a part of life. You’ve just got to rely on your relationship with God and know that Christ will set us free.”

“We don’t grieve without hope,” Sherry said. “Their lives weren’t in vain. His ways are different than ours.”

Indeed, their lives will not be in vain. Two of the Knapp kids’ life insurance policies will fund missions scholarships at Midwestern through the Fusion program as well as through the BSU at NCMC.

On the campus of NCMC, Boatwright said that she has seen relationships mended, bonds strengthened, and even people come to Christ because of the testimonies of the Knapps and Shaw over the past four months.

“I’ve had students who never even met them come up to me and want to talk about their lives and testimonies,” Boatwright said.

The four Knapp children were close. So close that Maerissa knows that if she had been at home instead of on the mission field in Kenya, she would have been the fifth person in the car the day of the wreck.

“Mike didn’t want to let Maerissa go,” Sherry said. “All those thousands of miles away and Daddy can’t be there to protect her. And then this happens seven and-a-half miles from our house. That’s why she was there. It’s God’s providence.”

Despite the immeasurable pain of their loss, the Knapp family sees God’s providence in more ways than that.

“I don’t know how someone who doesn’t have Christ can live through this,” Mike said. “I can tell people have been praying for us. If it wasn’t for Christ, I would have lost my mind.”

One way that Sherry copes with the grief is through the thousands of photos the kids had on their cell phones. She now uses Micah’s phone, and hasn’t deleted any of the pictures or videos, so many of which contain her kids and Trey laughing or goofing off.

“We gave them to the Lord when they were born,” Sherry said.

“And now He’s got them,” Mike said, “and taking way better care of them than we could.”