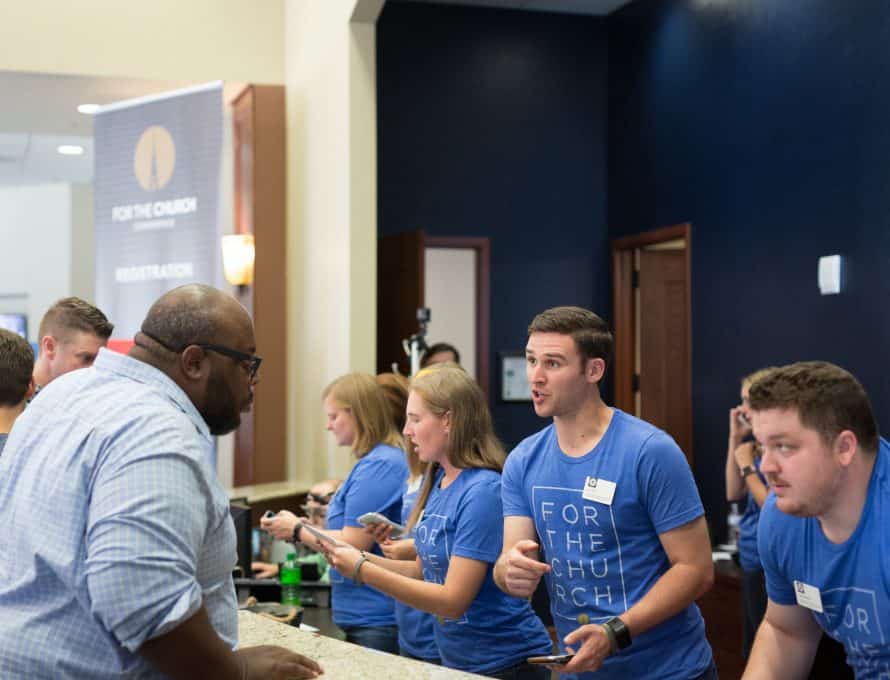 Members of Midwestern Seminary’s student life department assist registrants at the welcome desk before the 2017 For the Church National Conference held on Sept. 25-26 in Kansas City. MBTS photo

Allen, Midwestern’s president, spoke from Acts 17:1-7 in the conference’s first session on “The Minister’s Preaching” on Monday. The journey of pastoral ministry can bring many challenges and difficulties, he acknowledged, but pastors and ministry leaders must “show up” and press on daily to do God’s will.

The apostle Paul and his ministry partner, Silas, endured various trials throughout their ministry, Allen said, but through it all they remained faithful to their calling.

“Faithful ministry demands believing in prayer,” Charles said in describing the importance of prayer in a ministry leader’s life.

Nehemiah prayed sincerely, reverently, honestly and confidently, which Charles said were the keys to God answering Nehemiah and are a solid model in modern times as well.

A minister’s marriage, Ray Ortlund Jr. noted, is one of the most compelling statements that can be made because it puts on visible display the mystery of God’s love in Christ.

The Bible is all about the story of marriage, said Ortlund, pastor of Immanuel Church in Nashville.

“If we cave on the meaning of marriage,” he said, “we will lose not just one doctrine of the Bible, we will lose the whole point of the entire Bible…. If Jesus really is our true and better bridegroom, then to negotiate over what is so precious to Him is to insult Him at the most personal level imaginable, where His heart for us is the most tender.”

God gave people the gift of marriage – a gift that belongs only to God and can only be defined by God, Ortlund said.

The work of the preacher is the most glorious calling to which anyone can be called, Owen Strachan, professor of Christian theology at Midwestern, said in his message on “The Minister’s Study.” It is the most urgent need of the church and the world, he said, and as such, there is no greater need than for the pastor to study for his preaching.

Matt Carter, speaking on “The Minister’s Mission” from Matt. 16:13-18, underscored the need for church leaders to take their congregations from being consumers to being people actively engaged in God’s mission in everyday life.

“It has never been the biblical design for pastors and ministry leaders to be elevated in Gospel work above those in the pews,” said Carter, pastor of preaching and vision at Austin Stone Community Church in Austin, Texas.

Stating that pastors must maintain perspective on their place within the ministry, Jared Wilson, director of content strategy and managing editor of the For the Church website, said, “To have a legacy that eternally matters, you must resign your will to the supremacy of the glory of Christ and trade in your ambitions of personal success for the beauty of the bride of Christ.

“The Gospel is bigger than me; it is better than me,” he added. “Pastor, do you conduct ministry like you are the gospel to your church, as if it is really you who makes the difference? You are not called to be successful; you are called to be faithful.”

Matt Chandler, pastor of the Village Church in Flower Mound, Texas, preached from Romans 8 in the conference’s final plenary session, painting a picture for pastors of Christ’s love and acceptance for them – despite their shortcomings.

“(God) loves you as your heavenly Father, adores you, rejoices over you, and celebrates you,” Chandler told pastors. “His grace covers your shortcomings. If you can get this, everything changes.”