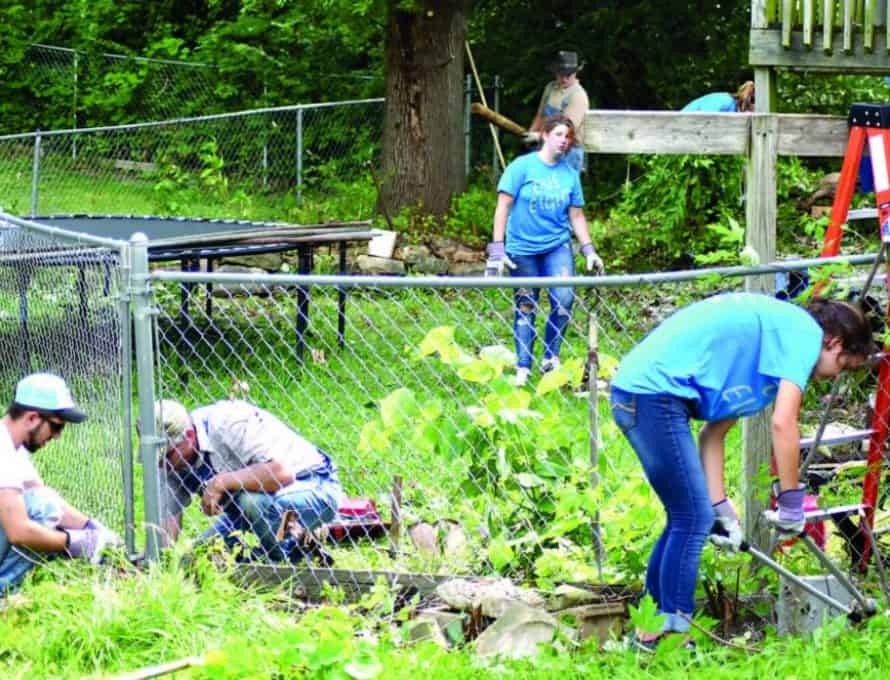 LINN – Area youth participated last week in a local mission by First Baptist Church in Linn to help families here in Osage County with household jobs they are physically unable to perform, such as pulling weeds, mowing and painting, to name a few. Photos courtesy of Unterrified Democrat

LINN – First Baptist Church in Linn, as part of the Southern Baptist Convention’s goal of helping those in need, last week hosted volunteers from around the area to do just that, providing four families in the area with assistance on projects they cannot do for themselves.

“The Bible tells you to go forth, from Jerusalem, Judea, Samaria, and to the ends of the earth. Linn is our Jerusalem,” said Linda Krueger, whose husband, David Krueger, is pastor at First Baptist Church. “There are people close to us that need help, and we decided to organize a mission camp here.”

The volunteer teens are staying at the church in Linn, where they participate in Bible study, worship and fellowship, having arrived last Wednesday night.

On Thursday, the volunteers were divided into groups and sent forth to help three families in Linn and one toward Loose Creek.

Those selected for assistance were chosen from applications provided to the church by friends or family, David Krueger said.

This project is similar to “World Changers,” a Baptist program designed to help those in need. Youth Sunday School School teacher Wyn Kelley serves on the committee and has helped with mission trips, including one to Indianapolis two years ago.

“On the way back, the kids were asking if we could do something like that locally,” said David Krueger. “So we thought if they wanted to do it, we would try.”

Kelley is a natural fit for this project, along with Sharryn Hawkes, who teaches kids on Wednesdays at First Baptist Church.

“The kids saw that some of the people, it seemed, were able to help themselves, and they had a heart for people who weren’t able to do that,” said Kelley. “We took that as a good opportunity to do something in these cases.”

Last fall, the process began to find people in need.

“We’re Baptists, so we put a committee together,” David Krueger quipped. “We can’t do anything without a committee.”

The committee worked up a form after speaking with Martha Ray of Osage Caring Projects.

“You couldn’t nominate yourself, but you could nominate a friend or neighbor,” said David Krueger, adding requests for information were sent to other churches in the community.

Originally, five were selected for the project, but one person moved into a nursing facility.

Of the remaining four, three were massive yard-improvement projects and one was just window washing, though that is not as simple as it sounds.

“We had one lady who is unable physically to do it, so we’re going to wash all of her windows, inside and out,” said David Krueger. “Most have a physical disability or debilitating illness and aren’t mobile. They have a genuine need.”

He said he’s glad to see such enthusiasm from youth in the area.

“We invited youth from other churches in our association,” said David Krueger of Osage, Maries and Gasconade areas. “We have a few, but most are from our own church. I’m just thrilled with the job they’re doing, and the fact they’re willing to do it.”

EDITOR’S NOTE: Neal A. Johnson serves as editor of the Unterrified Democrat in Linn.