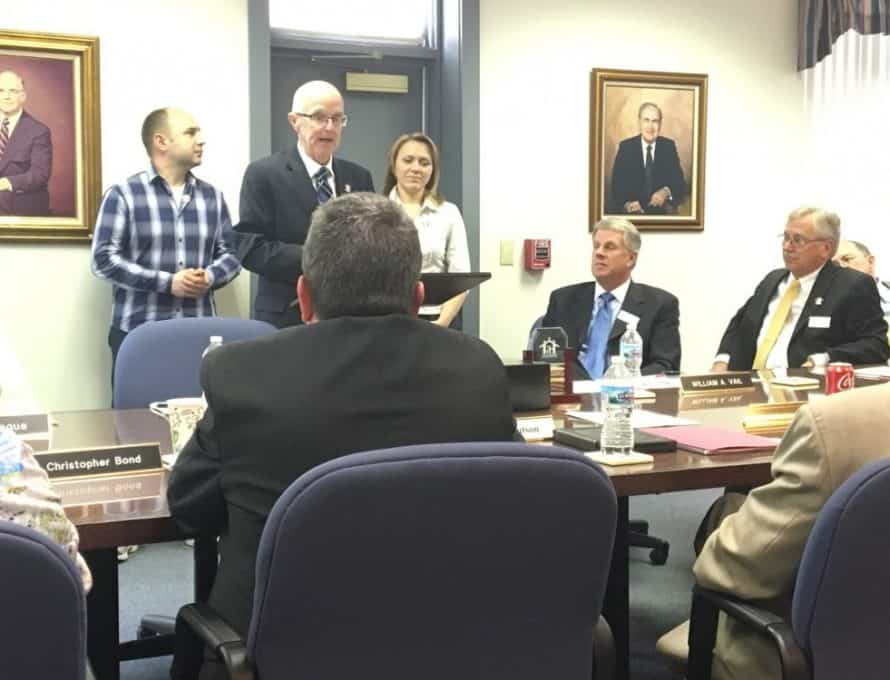 BRIDGETON – Roman, left, and Oksana, a brother and sister from Ukraine, who help lead a Christian fostercare/adoption ministry there, flank Misssouri Baptist Children’s Home President Russell Martin at the MBCH board meeting April 25. The two were in Missouri to help the two agencies learn from each other, swap ideas, and examine possible future partnerships. Pathway photo by Brian Koonce

BRIDGETON – Trustees for Missouri Baptist Children’s Home (MBCH) had a little international flavor in addition to the standard budget and ministry reports at their April 25 meeting at the main campus here.

Roman and Oksana, a brother and sister duo who help lead New Hope Ukraine, in that eastern European nation, wrapped up a two-week trip in Missouri at the MBCH board meeting.

New Hope Ukraine has a number of ministries for children and families, including an orphan ministry.  The state operates orphanages housing more than 100,000 orphans, while New Hope works with families in the churches to adopt children from them.  New Hope Ukraine also operates a summer camp, providing families not only recreation but also a time to learn and share what it means to be an adoptive parent.

“They learned from us while they were here, but we also learned from them,” said MBCH president Russell Martin. “Their engagement of the church and their use of volunteers are both done exceedingly well and we hope we can adopt and adapt some of their techniques for use here in Missouri.”

During the first quarter of this year, MBCH reported 43 permanencies. Of these, 15 were reunifications with a child’s family, 4 were guardianships, and 24 were adoptions.
MBCH human trafficking rescue ministry archived a milestone: a client who entered the rescue program transferred to the transitional living group home and will be graduating high school later this month.  Not only is this an accomplishment for the ministry, but MBCH workers have learned she is the first from her family to graduate high school.