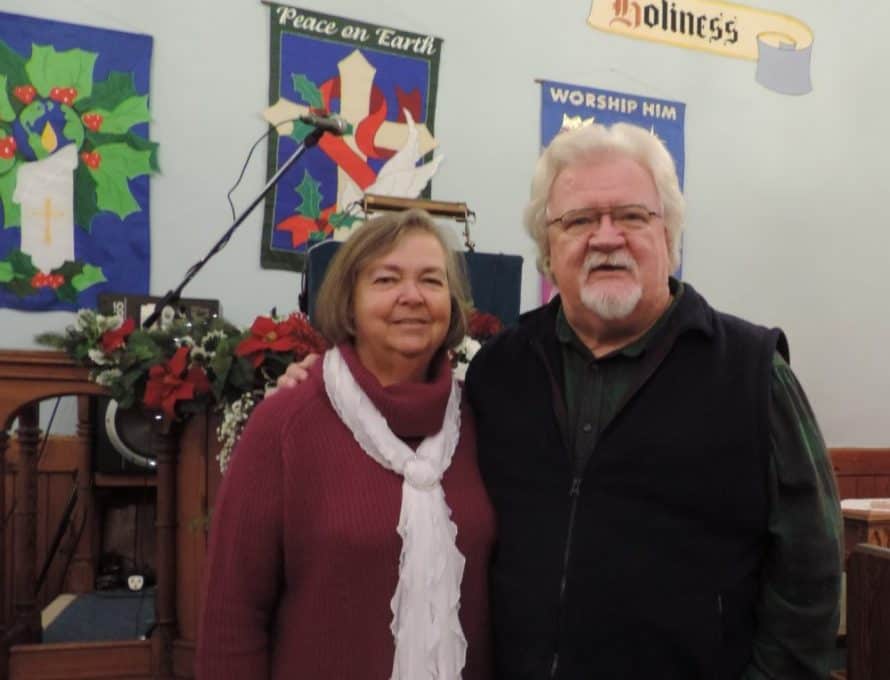 BOOTLE, Cumbria, England – Neither Jerry nor Carolyn Cox had ever set foot outside the United States. Yet, when God placed a call on his heart to serve for six months making disciples with a small church on the coast of the Irish Sea, both Cox and his wife, Carolyn were ready to pack their bags.

Cox, a bi-vocational pastor who served at Henderson Baptist Church in Rogersville, was reading The Pathway last July and noticed an article about American Interim Pastors Ministries (AIPM), a ministry that helps match willing Americans to temporarily lead British evangelical churches in need. The ministry was founded by a Missouri native, Chuck McComb.

“I read the article and jokingly said to Carolyn, ‘How would you like to go to England for six months?’” he said.

After the joke, Jerry didn’t think much about the opportunity or the need, but he did send an email to McComb, just to feel things out.

By October, Bootle Evangelical Church, a congregation of about 20 in rural, western England, had seen a video of Cox preaching and – Missouri accent not withstanding – invited him to come and serve as their interim pastor.

Cox let Henderson Baptist Church know, and said the sense of support was overwhelming. They gave him six -month leave of absence and along with Webster County Baptist Association raised the funds to help bridge the expense gap of living in the U.K.

“From there, it was just a matter of filling out forms and applying for visas,” he said.

“From a young age, I always wanted to go on the mission field, so I was excited about it” Carolyn said. “I was hesitant to leave my 87-year-old mother and grandchildren, but thank goodness for Skype! I get to talk to my mother every day.”

The Coxes made it Bootle, a tiny village nestled in the English Lake District by late November.

Though the cultural differences from rural Missouri to rural England abound, Cox said making disciples is pretty much the same as back at home.

“It wasn’t that big change,” he said. “I tell them it looks a lot like the Ozarks, except that our hills have trees on them. But their needs are just like any church in any community.”

Carolyn said by far the hardest thing to get used to is driving on the left side of tiny English roads.

Jerry said the church is an older congregation, but they are fighting a culture that where young people don’t see a need for the Church.

Jerry – who taught school in Missouri for 32 years – has made inroads at the local primary school and speaks there on life in the United States on Fridays. They and a American student missionary meet with some students to talk about the Bible after school on Mondays as well. Carolyn has starting a quilting ministry, building relationships with women who previously had never set foot in the church in Bootle.

The Cox’s interim time will come to an end in June and they will return home. Bootle looks to have found an English bi-vocational pastor who ready to continue sowing the gospel in Cumbria.

Though he is returning to Missouri, Cox urged anyone who feels the call to be open to serving for a time with an English church.

“The people are very much like the ones back home,” he said. “They’re friendly, loving, funny, and they have a desire to reach people for Jesus. There are going to be various cultural challenges, but it’s very much like pastoring at home.”

McComb said that culturally, British pastors will work until about 65, and then they stop for some reason and local interim pastors for whatever reason have not really caught on.

“Our goal isn’t to be free labor forever,” McComb said, “but to help them grow, work alongside them using British methods whenever possible, and get them ready to find a British pastor.

AIPM assignments are normally six months, and while the interim work is volunteer and unpaid, the local British church provides a furnished house with bills paid, reimburses for airline tickts and visa fees. The only expense the American interim is responsible for is groceries (which average 30 percent hire than American prices) and a $300 per person fee to participate in the British National Health Service’s medical care system. On the front end, AIPM screens interim candidates, checks references, sends videos of preaching, conducts background checks, etc.

Though England has fallen a long way from the days when Spurgeon preached to crowded halls in London, McComb said the fields are white for Missouri retired pastors to come and preach the gospel.

“By and large, the British love Americans,” he said. “They’ve either been here, are going here, or have family here. Christianity isn’t necessarily held in the highest esteem and a lot of people are aggressively non-Christian, probably due to abuses of power over the centuries. They have a ‘British reserve’ and won’t interrupt you, but they are happy to listen to your funny accent for 15 minutes if you’ll initiate a conversation.”

For more information about AIPM, go to americaninterimpastors.com or call McComb at 1-281-799-1869.