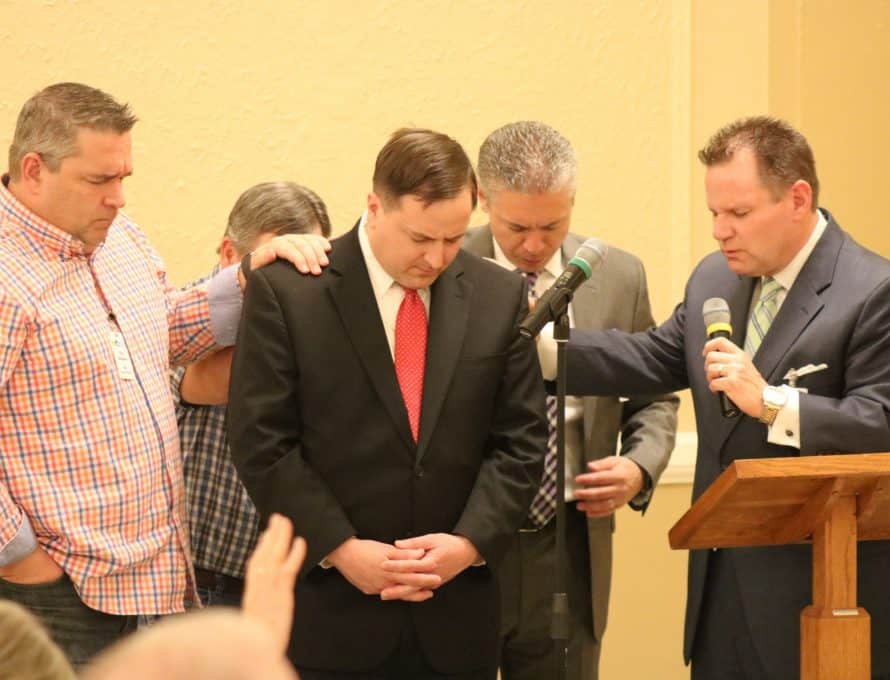 Board members joined city officials in front of the Baptist Building on April 11 to celebrate the completion of a joint project of the MBC and the Jefferson City community: namely, the improvement of sidewalks running alongside the Baptist building. The improved sidewalks, now wider and with better landscaping, was funded jointly by the city and the MBC.
During a ribbon cutting, MBC Executive Director John Yeats shared his gratitude to participate in this partnership with the community.

“We hope that this facilitates a message that we can do things together if we simply work together,” he told a crowd of Board members and city officials.

Yeats later told The Pathway that he hopes Missouri Baptists will visit the Baptist Building to pray, to learn about the MBC’s ministry efforts, and to see the new sidewalk and other recent improvements to the building. And the new sidewalk is not the last renovation to come to the property: During their meeting, Executive Board members approved the use of $25,000 of interest money from a designated funds bank account to renovate landings and restrooms on the Baptist Building’s first, third and fifth floors.

In other business, Executive Board members also approved 2018 goals for Missouri Baptist giving programs. They set the 2018 CP goal at $14.5 million, which equals the actual CP giving receipts from 2016 but is less than the 2017 goal of $14.8 million.

The Board also set allocations for the 2018 CP goal. They removed the 5 percent “shared expenses” category, which in previous years has helped to fund The Pathway and annuity protections; the money needed for these ministries will now come from funds allocated for MBC causes. The Board allocated 60 percent of the 2018 CP goal for MBC causes, while allocating the remaining 40 percent for Southern Baptist Convention (SBC) causes. Any CP receipts above the 2018 goal will be split evenly between MBC and SBC causes.

Additionally, the Executive Board approved the use of $403,190.66 in underspend from the 2016 budget year. They designated the use of this underspend in the following ways:

The Board also approved the reallocation of $11,990.79 to support the Larry Lewis Learning Center. In 2014, the Board named a portion of the Baptist Building after Board member and longtime MBC and SBC churchman Larry Lewis, intending this space to be refurbished and used as a conference and ministry training area within the building.

The $11,990.79 now allocated for the Larry Lewis Learning Center had previously been set aside for the maintenance of block party trailers. These funds, however, were no longer needed for this purpose after the trailers were donated to various local associations several years ago.