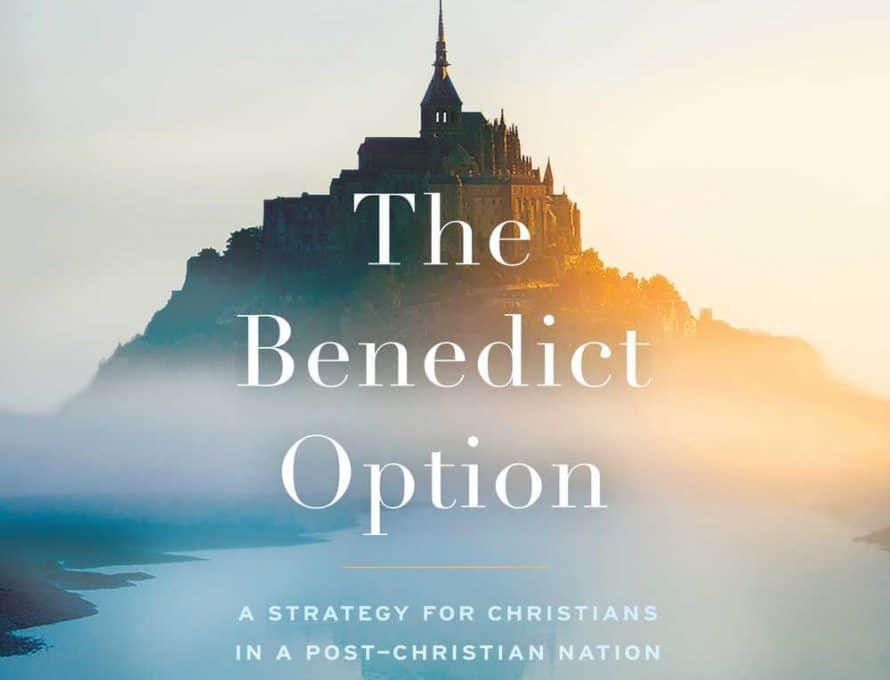 Thirty-six years ago a philosopher named Alisdair MacIntyre declared that Western culture had lost its way, similar to the Roman Empire before its fall, and that those living virtuous lives could no longer participate in this culture.  Instead they must form alternative cultures that would allow them to survive this new “dark ages” with integrity and morality intact.  The last sentence of his book, After Virtue, called on us to await a new leader who would help us live out our Christian faith in the midst of a culture that rejected it, “another – doubtless very different – St. Benedict.”

Rod Dreher builds upon MacIntyre’s work, both his warning and his proposed solution, with the “Benedict Option.” This is the idea that in light of current conditions in our culture and our churches, conservative Christians in America can no longer live the way we’ve been living.  Our culture has abandoned virtue and embraced a way of life that denies our humanity.  We must make a “decisive leap” into a countercultural way of living for God in every area of our lives, focusing on community, discipline, and passing on our faith to the next generation.  In other words, the church must actually be the church.  Otherwise we are lost, and can only expect continuing assimilation to our culture from one generation to the next.

For his explanation of what this way of life should look like, Dreher appeals to the actual St. Benedict, Benedict of Nursia (480-547).  Benedict went to Rome for his education as a young man and was shocked at the corruption and decadence of the city.  Instead of embracing his life of privilege as a government official’s son, Benedict decided to live as a hermit, focusing on prayer and meditation.  After three years of this, Benedict was invited to lead a monastery, and would eventually establish twelve monasteries of his own.  To guide his monks, Benedict wrote a book now known as The Rule of St. Benedict.

Dreher weaves together his account of visiting the Benedictine monastery in Nursia today with a description of Benedict’s Rule, which calls for establishing a community ordered and centered around Christ.  It contains strict instructions for prayer, work and social life.  Dreher is not calling on us all to be monks, but to apply these principles to the church today.  The Benedict Option calls for a new way, which is really an old way, of approaching politics, church, education, community, and work.  It demands that we resist our culture’s ways of thinking about sex and technology.  It means building a culture in the church through witness and spiritual discipline that will not only help people walk with Christ but impact others around us.  For how can we win people to something we don’t really have?

Dreher’s book is worth reading and thinking through.  His analysis of our current cultural climate and the failure of the church to adequately respond to where we are today is essentially correct.  His overall strategy of focusing on the purity and strength of our Christian communities is sound.  We cannot love the world if we hope to live for Christ and actually change the world.  We must start taking our faith seriously, for our own sake and the sake of our children.

I recommend the book with two caveats, though.  First, you will not agree with everything Dreher says.  He is Eastern Orthodox and has strong convictions about the importance of liturgical worship.  He believes parents should only homeschool or enroll their children in Christian classical education.  His historical understanding of how our culture got to this point is somewhat simplistic and open to question.  You don’t need to agree with these things to benefit from Dreher’s insights.  Second, Dreher tends toward a defensive and isolated posture, while the Bible calls us to something different. We are not monks, but kingdom witnesses taking the gospel to the ends of the earth, knowing that the gates of hell cannot prevail against Christ’s church.  However, the Benedict Option, understood and practiced in light of our mission, will help us be those kingdom citizens Jesus saves us to be.