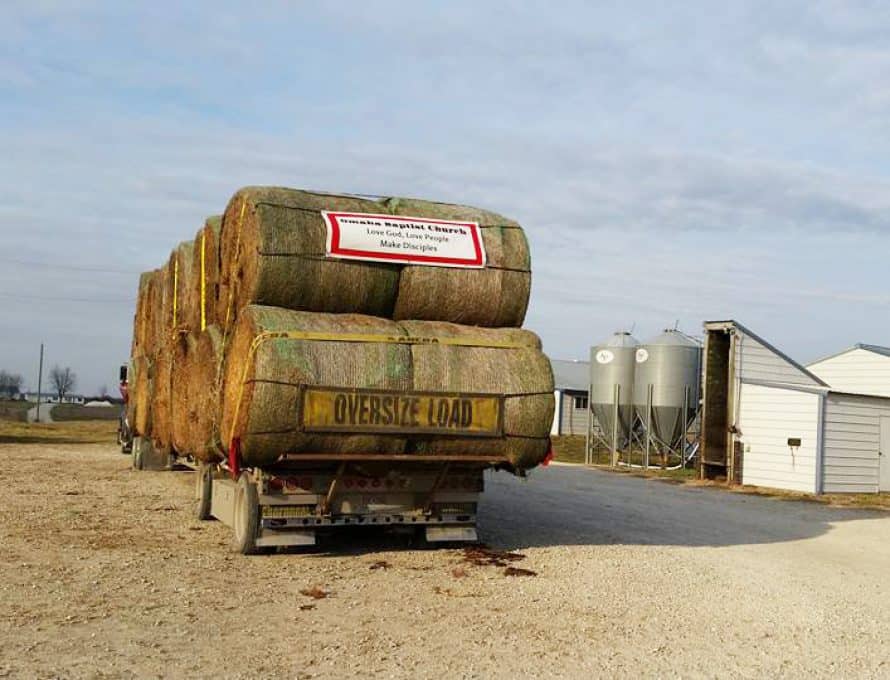 UNIONVILLE – Omaha Baptist Church here loaded several trucks with hay bales for victims of the wildfire that devastated Western Kansas. As seen in the photo above, they didn’t simply desire to help hurting people, but they also wanted to “love God, love people” and “make disciples.” Photo by Mary Vestal

ASHLAND, Kan. (WNS) – As 58-year-old Greg Gardiner surveyed the devastation from this month’s deadly fires, he described an eerie scene across the Gardiner Angus Ranch north of Ashland, Kan. Friends pitched in to help shoot the last of the fatally maimed cattle over the weekend, drones surveyed the breaks to confirm none were missed, and community volunteers began pulling up charred fence post and rolling up burnt wire.

The fire on this ranch claimed more than 500 head of cattle and burned 42,000 of the ranch’s 48,000 acres—a loss Gardiner described as a microcosm of much wider destruction across Kansas, Texas, Oklahoma, and Colorado caused by wildfires in early March.

As soon as the fires died down, Missouri Baptists were among the many relief workers to bring help and the love of Christ amid this disaster.

“It’s just devastating,” said Pastor Kevin Collins of Omaha Baptist Church, Unionville, Mo. Alongside a handful of church members and several others from the farming community, Collins traveled to Ashland, Kan., earlier this month to bring relief to devastated ranchers in the area. During this trip – inspired by Collins’ daughter-in-law, Courtney – they took four semitrucks and two gooseneck trailers full of hay bales. Ranchers desperately need this hay because the cattle who survived the wildfires would otherwise starve for lack of grass to eat, Collins explained.

“It looked like an atomic bomb went off,” he said. “There was just burned-up charcoal everywhere, except the wind blew a lot of that off. And it looks like just sand underneath that.

“We’re just going to help,” he added. “Our church is a farm church, a rural church, with ranchers and farmers—and that’s what we do for one another. From our point of view, we want to show them that God hasn’t forgotten them, that God still loves them. Hopefully they’ll see that through us.”

Collins said that they hope to return to Ashland soon to pull up burnt fences and possibly to help install new ones.

On the afternoon of March 6, Gardiner of Ashland, Kan., drove a trailer up to his brother Mark’s home, planning to rescue three horses and two dogs before fire engulfed the structures. But high winds propelled the fire to this corner of the ranch quicker than anticipated.

He could see his brother walking toward the barn and his sister-in-law making her way to the house to get the dogs as sudden darkness engulfed the pickup. “It was like somebody put a hood over my head and it just went black,” Gardiner said. Enveloped in dust and smoke, the heat from the fire penetrating the cab of his truck, his self-preservation instinct kicked in and he drove away (using his internal compass to guide him) as a nearby tree belt exploded in fire.

It was 30 minutes before a fire crew could confirm the couple’s escape to safety. The house is gone, the dogs—who refused to move—didn’t make it, and Gardiner tears up every time he thinks of how close he came to losing his family. He has struggled to make sense of his decision to flee the scene rather than run toward his brother and sister-in-law, comparing himself to the Biblical account of Peter denying Christ. A friend reminded him not to be too hard on himself: The trailer was blocking the only escape path for all three of them, so perhaps God prompted him to make a lifesaving move.

Gardiner, whose family homesteaded on the land in 1885, said his two brothers and their three sons would rebuild the ranch. He still has 1,500 head of cattle, and his operation uses an embryo transfer program that has produced high quality beef and garnered national acclaim.

The losses among neighbors could be more crippling: Three sisters who run a ranch with their husbands lost all of their homes. Many calves across the region were orphaned or never born, compounding financial losses. And repairing fences will be another financial challenge for the region: Gardiner said 461,000 acres burned in his home of Clark County, and close to 12,000 miles of fence need repairing at an estimated cost of around $10,000 per mile. His ranch is one of the largest with 300 miles of fence. Carcass disposal is an additional expense.

But he has also heard stories of healing and sacrifice. Two brothers who hadn’t spoken in seven years mended ties after one brother saved the other from certain death when fire crews could not reach him in time. Trucks are rolling in with donated hay and feed from fellow ranchers across the region. A 4-H Club organized efforts to care for orphaned calves until ranchers have had time to recover from their losses. And Gardiner said he already sees sprouts of green through the charred land, noting the timing of the fire allows for spring rains to promote new growth before next winter.

What do the cattle losses mean for the consumer? Gardiner said beef has a longer turnover than pork and chicken. “Every day when you eat a hamburger or steak, it took a rancher three years to get that on your plate,” he explained, pointing to a potential hit in the 2019 production cycle. “Those in the cities should have a vested interest. Their meal just burned up.”

He said the lack of national news coverage has been a little disheartening and bemoaned the attention received by protesters against President Donald Trump’s revised travel ban during a week of great trial for the central Plains: “Y’all don’t have enough to do? Don’t you have any fence to fix or cattle to work?” he noted with a chuckle.

A rundown of the losses

The region’s drought from 2010 to 2014 gave way to two wet springs and extensive growth on the prairie, providing ample fuel for grass fires that began last week and burned over a million acres across four states. Here’s a rundown of each state’s losses (excluding cattle, which are still being assessed) as of March 14:

Texas: Four deaths and more than 480,000 acres burned. Gov. Greg Abbott declared a state of disaster in six counties in the Texas Panhandle.

Oklahoma: One death and more than 782,000 acres burned in the Northwest Oklahoma Fire Complex. Three additional fires in the state have burned more than 100,000 acres. Gov. Mary Fallin declared a state of emergency for 22 counties.

(This story includes reporting by Benjamin Hawkins of The Pathway.)