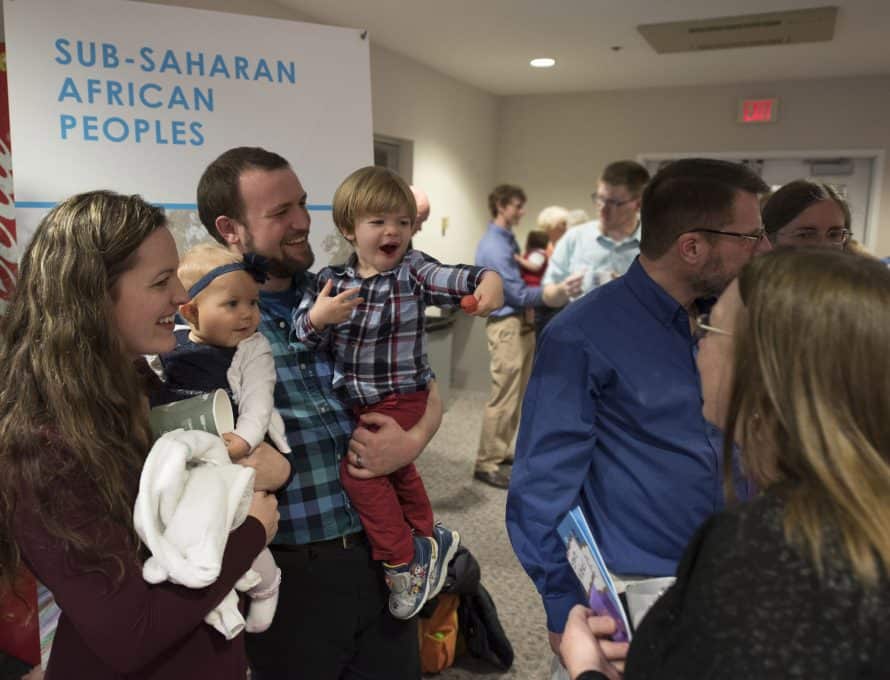 RICHMOND, Va. – Michal MacDonald (left) and her husband, Scott, share a moment of celebration with their children Adelaide and Malachi, and with Michal’s mother, Patty Mitchell (right). The MacDonald family, sent by Third Baptist Church in Marion, Illinois, will share the gospel with Sub-Saharan African peoples. IMB Photo by Roy Burroughs

RICHMOND, Va. (BP) – Twenty-nine Southern Baptists were appointed as missionaries to the nations during the International Mission Board’s trustee meeting Feb. 28-March 1 near Richmond, Va. Trustees also heard numerous reports and recognized 63 missionaries who retired or died within the past year.

Newly appointed missionary Carter Finley* of North Carolina said God is providing unprecedented opportunities for her to serve Him among the nations, and “with a degree in fibers, fabrics and handcrafted textiles, along with a desire to take the good news of Jesus to the ends of the earth, the Lord is allowing [her] to literally and figuratively weave the Gospel of Jesus Christ into the hearts of Central Asians.”

Aaron and Melissa Stormer of Hilldale Baptist Church in Clarksville, Tenn., are being sent to the American peoples. Aaron said they are going “because we know that God’s heart is for all people to know His name.”

Melissa noted she realized God’s heart for the nations while sharing the Gospel in a small mountain village in Haiti.

“I felt Jesus whispering, ‘I died for them as well as you,'” she said during the March 1 celebration. Her husband felt God calling him to the mission field while walking the stone-lined streets and surrounded by blue tiles and the lost people of Porto, Portugal.

“God has called us to go and carry out His mission in order that the lost may be found and His truth proclaimed,” she said.

Jim* and Pam Smith* expressed thanks that Southern Baptist churches work together through the Cooperative Program and the Lottie Moon Christmas Offering to send and support missionaries. Jim said it was as a young Royal Ambassador (a Southern Baptist missions discipleship program) at a church in Virginia that he became aware of God’s heart for the nations. From Panama to China, short-term mission trips were formative in turning his heart toward the nations.

Growing up as a pastor’s kid in Colorado and Virginia, Pam felt God used short-term mission trips from the bush of Kenya to the busy streets of Turkey to awaken her desire to go from short-term to full-time missions. The Virginia couple will share the Gospel in South Asia.

‘A day of wide open doors’

During the trustees’ plenary session, IMB President David Platt implored trustees to lead Southern Baptists away from the deception, diversion, distraction and division that have dominated news not just in American culture, but also in the church, and specifically the Southern Baptist Convention. Rather, Southern Baptists should be looking at what the apostle Paul refers to as a “wide door for effective work” (1 Corinthians 16:8-9).

“We are living in a day of wide open doors here and around the world, and it is high time for Southern Baptists not to divide, but to join together – not to be distracted, but to be resolutely focused on the purpose for which we came together in the first place: the spread of the Gospel in a world of urgent need … a world of urgent need and unprecedented opportunity,” Platt said.

Sharing a video story about Abuk, a young refugee from Africa who obediently answered God’s call to return to Africa to make disciples, Platt praised God for a Southern Baptist church in Amarillo, Texas, that reached out to the immigrant family.

“We hear those words [refugee, immigrant] today, and they’re so politically charged, and if we’re not careful, we can start to picture immigrants as problems to be solved, not people to be loved,” Platt said. “Brothers and sisters, there are wide open doors to love people right around us in a way that leads to love for people all around the world.

“This is a story of a refugee turned IMB missionary! And that’s possible – why? Did you see the news headline in that video? ‘Baptists come together despite barriers.’ Oh, may that be the commentary on our cooperation in this day of wide open doors.”

During the plenary session and committee meetings, trustees also:

• Accepted a gift from Woman’s Missionary Union Foundation, presented by Sandy Wisdom-Martin, executive director of national WMU, including $11,355 for LMCO and an additional $2,154 for support of missionary kid educational needs and spiritual development. “For the countless innumerable pennies and prayers, we give thanks,” trustee chair Scott Harris prayed in gratitude of the gift.

Reading the names, places and lengths of service for each former missionary, Platt concluded the list with Alma Rohm, 90, who served in Nigeria for 54 years. She sailed to Nigeria on a cargo ship in 1950 and died in Nigeria in 2016. Chief Adebisi Adesola called Rohm the “last of the Mohicans” because she survived all odds in love for the people of Nigeria as the longest-serving American missionary to Nigeria from the Southern Baptist Convention.

“These lives beckon us, brothers and sisters, like the chorus of men and women in Hebrews 12, to come together and fix our eyes on Jesus and the mission to which He has called us,” Platt said. “Let’s work together in a day of wide open doors and many adversaries to send multitudes more Alma Rohms to the ends of the earth.”