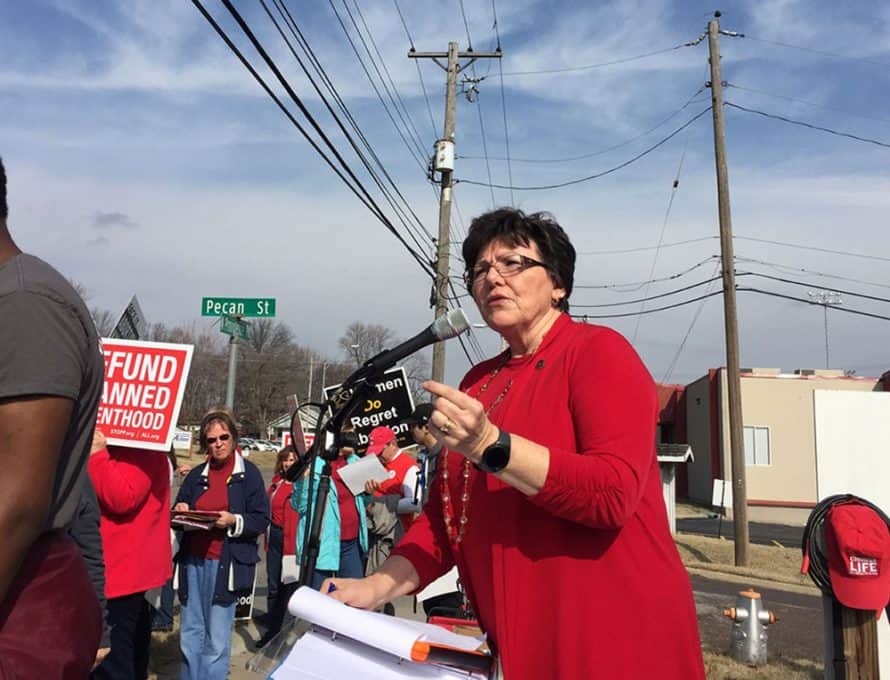 Bonnie Lee speaks at a Feb. 11, 2017, rally outside the Planned Parenthood center in Columbia, Mo. After state inspectors discovered mold, rust and bodily fluid on equipment used at this Planned Parenthood clinic last month, she called it an "atrocity" that threatens the health of Missouri women. Photo courtesy of Kathy Forck.

Federally qualified health centers, which meet women’s health care needs without providing abortions, outnumber Planned Parenthood centers in America by a 13 to 1 margin, according to Protestpp.com, the official website of Saturday’s rallies.

The rallies — sponsored by a coalition of pro-life groups under the banner of #ProtestPP — included prayer and speakers.

U.S. Rep. Marsha Blackburn, chair of the House Select Investigative Panel that recommended defunding Planned Parenthood in December, told Baptist Press “it’s encouraging to see so many people coming out to support the pro-life cause.”

“The American taxpayer has made it clear time and time again: taxpayer money should not be spent on abortions,” Blackburn, R-Tenn., said in a statement. “Defunding Planned Parenthood is not about stripping health care from women, but protecting our most basic right. The right to life. It’s about continuing the process to protect our most vulnerable and doing what taxpayers sent us to Washington to do.”

In some locations, pro-life demonstrators drew even larger counter-demonstrations in support of Planned Parenthood, according to media reports.

Approximately 100 pro-life demonstrators in Columba were met by some 150 Planned Parenthood supporters, she said.

Protestpp.com includes a link to 99 separate press reports on the rallies compiled by Google News and notes “outstanding media coverage throughout the United States.”

Lee noted, “Our purpose in sponsoring the rally was to encourage the defunding of Planned Parenthood with our tax monies because they are abortion providers. Their main business is abortion

… Our taxes should not go to them to support the business in any way.”

The $553 million that Planned Parenthood receives from state and federal governments annually represents 43 percent of the organization’s budget, according to Protestpp.com. Of that amount, $430 million comes from the federal government.

“What you don’t use on one thing, you use for something else,” Lee said. “So if you put tax money in, it frees up other money to go to these other projects that help provide abortion.”

Planned Parenthood’s oft-repeated claim that only 3 percent of its business is abortion is misleading, Lee said, because various services rendered to support abortion are counted separately.

If, for example, a woman receives a pregnancy test, an ultrasound, a test for sexually transmitted disease, an abortion and a post-abortion follow-up — all of which are medically necessary to perform an abortion — Planned Parenthood counts her as having received four services other than abortion, according to Lee’s explanation.

One of every eight women to visit a Planned Parenthood clinic gets an abortion there, Protestpp.com stated.

Lee said she and other demonstrators are concerned that Planned Parenthood clinics harm women in addition to ending the lives of unborn children.

A longtime pro-life advocate and counselor outside the Columbia Planned Parenthood center, Lee alleged the center once refused to see a post-abortive woman for her follow-up appointment because she stopped to talk with pro-life demonstrators on the way in.

On another occasion, Lee said, she accompanied a post-abortive woman with potentially life-threatening complications to an OB/GYN because the Planned Parenthood clinic would not provide adequate care.

“I don’t want my tax money going to a place that does not give care,” Lee said.

The ERLC’s petition drive ends March 1 and is accessible through erlc.com.