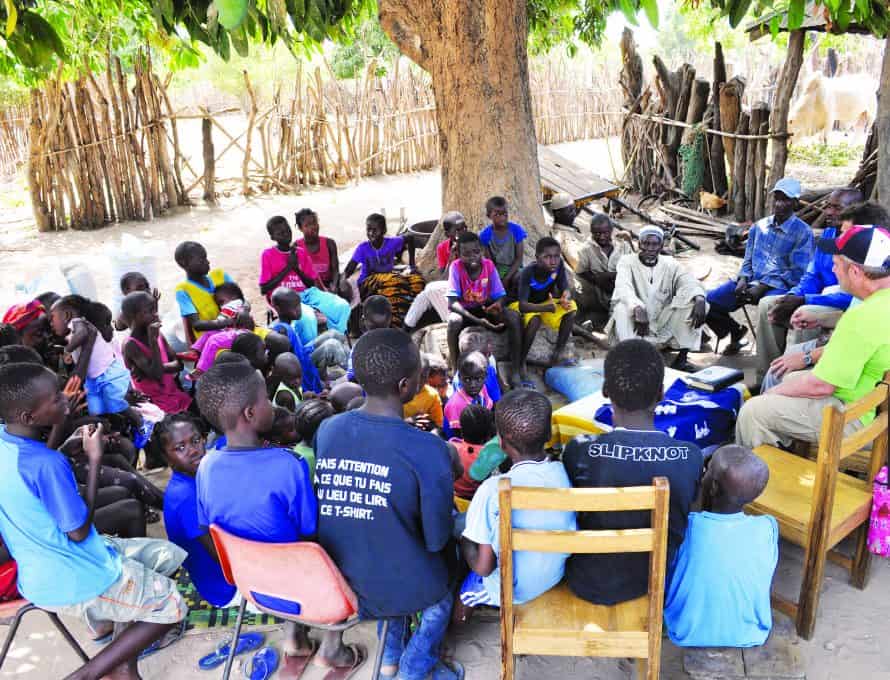 NEOSHO – For a decade, Calvary Baptist has been on mission in Thailand and in Africa. One truth coming from both locales is the need for repeat visits.

The work in Africa

“Calvary was a guinea pig for the engaging churches that the IMB started. Rick Hedger (now MBC staff) was pastor before I came,” said current pastor Roger Brumley.

“First we had to “find the (African) people group we had adopted,” Brumley said.

Through the years, they found and ministered to them in Guinea-Bissau, Senegal, and The Gambia, through education camps, clinics, women’s ministry, and planting a church among the “M” people.

“Over the years, we have seen a lot of people reached among the “M” people. Several tribal leaders, including chiefs have come to Christ. We’ve gone from not knowing if there two churches in the three countries, to now having close to 70 churches. Some have up to 300 people, some have only a handful meeting under mango trees.”

“One chief said we are the only group that keeps going back (to them). We do different things to show we care. It amazes them we keep returning,” Brumley said.

“We now are establishing Bible schools to train their leaders in theology and biblical studies. Most people we reach can’t read, so we do Bible storying, so they can hear the truth. They learn differently. A lot of them feel like God wants them to pastor.

“God is using the “M” people to reach other people groups. Some churches are on their feet walking, but they are very young churches.”

The “M” language has only been written about nine years, and combines 26 dialects. There are also national languages – Senegal, French; Guina-Bissau, Portuguese-Creole; and The Gambia, English. Sometimes Brumley has to be translated twice – once in the native language and then in “M.”

“They finally have been able to put it print, but most can’t read it. Most speak three to four languages, but some speak seven or eight.”

Muslims have come to some areas where past mission work stopped.

“The only reason Muslims haven’t come into these nations (in high numbers) is because the Christians keep coming back. God has won the victories and allowed us to be part of that. There are so many things God is doing and we know nothing about.”

“Two years ago, three of us crossed a two-mile-wide river, then took roads. One man said ‘God told me three white men were coming to tell me about Jesus’ Forty-five minutes later, he was saved, and two months later he died. Now, about 50 attend regular bible study (in his area).

For ten years, Leona Mieswinkel and Marinda Sandlin have gone to Thailand, leading one of five biblical English camp teams, each using a Bible-based curriculum.

“An official overseeing 175 schools said those with the biblical English camps are talking to others and ‘now 170 other schools want English camps.’

“For the last two years, we’ve handed out Bibles. One school associate said the Bibles are ‘the best gift they could ever have,” Mieswinkel said adding they openly teach Bible in the schools.

Two years ago, they showed Christian resolve when a beloved Christian translator died suddenly. The two women continued the camp with 89 children.

Working with Thais has been a continual witness. A Buddhist interpreter said the returning teams ‘do more in one week than they (nationals) do for the students in a year.’

“We keep coming back because we love them,” Mieswinkel said. “Now they are responding.”

The Thai project began as a partnership with the International Mission Board. Recently, the Calvary Thai team raises most funds through an annual yard sale and arranges schedules with schools, interpreters, travel and lodging.

“As long as God tells us to go back, we go. It is in an area where is can be done. We have an open invitation,” Mieswinkel said. “Laos is becoming an open country. I wish the IMB would take a new interest in this work.”

Distribution of Bibles began when a former missionary heard Mieswinkel’s heart at an association meeting. He helped her arrange for Thai-English Bibles printed in Thailand.

“We do the camps through games, songs, and a worksheet. Some families come and hear in their language through the interpreter. The Bibles go into the homes. You look at the Bibles you gave out last year and this year, they have scriptures underlined,” Mieswinkel said.

Sandlin said about 70 of the 180 school children live most of he year at the school.

“Most students can’t afford an education after ninth grade. It’s a very poor area. Those who live at the school with one male and one female teacher, can’t afford to go home to the mountains (except for annual breaks.) They clean the school, do their laundry, and have their own garden. They have rice and some soup mix three times a day.”

“They are open to the gospel. Thailand is open to Christianity,” Sandlin said.

Calvary also ministers to a Thai Christian orphanage mainly for girls whose parents are deceased or in prison.

The other four biblical English teams are from Trustville Alabama, California state, and Cassville and Purdy, Missouri.