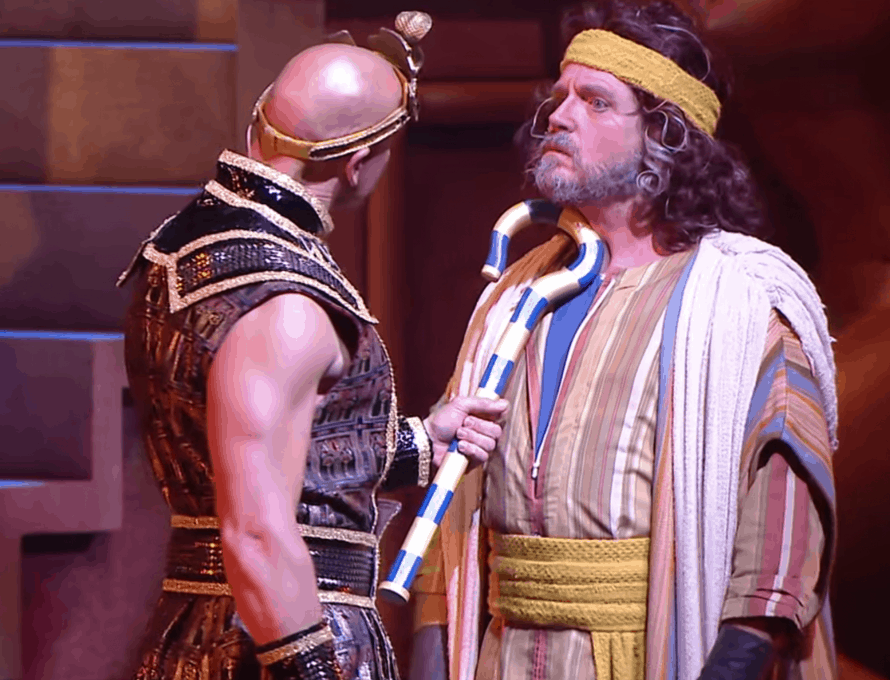 BRANSON – Matt Neff, the CEO of Sight and Sound Theatres, grew up going to the original theater in Lancaster, Pa., with his grandmother, and hopes that under his leadership, generations to come will continue to get see the Bible come to life as he did.

Neff began as a stagehand and now as part of the executive leadership team, splits his time between Branson attraction and the theater in Pennsylvania.

“Whatever story we tell, we don’t want to compromise God’s Word,” he said.

For now, that story is – in Branson at least – “Moses.” Although it is on winter hiatus now, it will return March 4.

Fraser Armstrong, a member of First Baptist, Branson, as the title character, joins with dozens of other actors and actress, joins more than 60 animals (including horses, camels, lambs, goats, and even trained rats) that make up the cast of the show.

“I am the broken vessel God has chosen to tell the story of a broken man,” Armstrong said. “May this and every performance point people to the grace found at the foot of the cross.”

Following on the heels – or tail – of the most recent Sight and Sound production of “Jonah,” “Moses” brings an innovative stage show to a familiar story. It follows Moses’ story as the infant Hebrew slave in the reeds on the bank of the Nile as he grows up, leaves Egypt, encounters God in the burning bush, returns to demand Pharaoh let his people go, the parting of the Red Sea and the 10 Commandments. While movie magic might make miracles such as the burning bush or parting of the Red Sea seem old hat, the way the live production team pulls off the stunts – especially when Moses’ staff turns into a wriggling snake – will leave the audiences scratching their heads. Larger than any previous show Sight and Sound has produced, “Moses” sports a 300-foot wrap around stage that puts the action on all sides of the audience, and features 60 sets that are as high as three stories tall. In all, it took 50 semi-truckloads to haul the sets and props to Branson.

One of the new directions on Sight and Sound’s horizon is a release in movie theaters.

“One of the things we’ve been asking ourselves is ‘what can we do to share the gospel in creative ways?’” Neff said. “We’re passionate about bringing the Bible to life and up to now we’ve done that just on stage.”

DVDs of the performances are sold, and it is film of one of their shows that will be coming to 600 theaters later this year, though Neff declined to share which show it will be.

“It’s something we’ve never tried before, but since we do live theater, we’re used to the unexpected,“ he said.

For more information on Moses and Sight and Sound Theater, go to www.sight-sound.com.