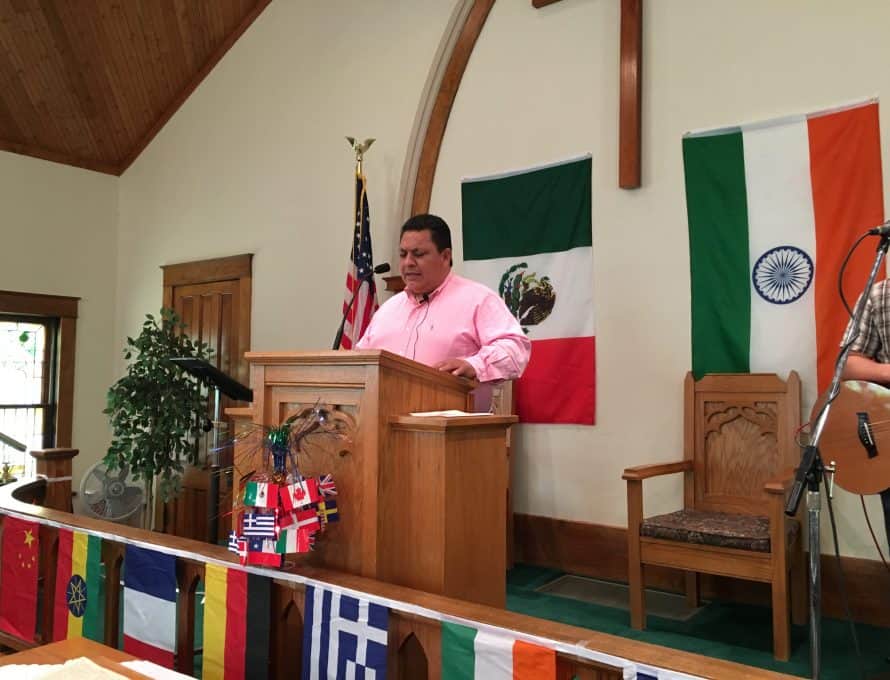 CLARK – Chris Canote wants missions to always be foremost at Perche Baptist he pastors in Clark. For the latest reminder, the church held its first mission’s Conference “Around the Corner, Around the World” on November 4-5.

Five guest parties participated, including Pastor David Huerta in Acuna, Mexico; a couple whose names are hidden for security reasons who are returning to a Middle Eastern Muslim dominated area; interim pastor and missionary Nate and Lori Kohl of Harrisburg; Jacob and Amy Kingery, who started a Christmas shoebox ministry in Mexico named Project Blessing after the loss of their infant daughter Blessing on a mission trip to Mexico; and Adam and Tim Canote of Calvary Chapel, in Columbia.

“Our family has run Evident Ministries and we’ve made several trips to Mexico. I’ve been very mindful of missions since 2003. That’s part of the package when Chris Canote is pastor,” he said. “It’s a great marriage (between Perche and Evident).”

“Perche already had a husband and wife mission committee who formerly belonged to another church. Part of the driving force to the missions conference is the disappointment through the years of the historic, traditional what is called revival services,” Canote said.

The weekend had an aggressive schedule: A Friday night youth ministry event, and on Saturday, a men’s ministry breakfast and clay shoot; a missions conference session, a women’s ministry luncheon, and an afternoon service project at Coyote Hill Christian Children’s Home, launched out of Perche 25 years ago. On Sunday, people could share about the mission event, and Sunday evening was children’s ministry event.

“I love the Cooperative Program. One drawback is people toss in the check in the collection plate and lose the connection with the missionaries,” Canote said of a purpose of the weekend.

“God is fanning the flames for missions. We’re making plans for next year, but we don’t know our emphasis yet.”

Other area churches, including those in the Mt. Zion Baptist Association were invited and some were present for activities.

Canote is always recruiting friends and family for the Mexico trips taken several times a year. Often male youth preach and “have to rely on the Lord, because Mom and Dad are not there. We get excited about missions and evangelism.”