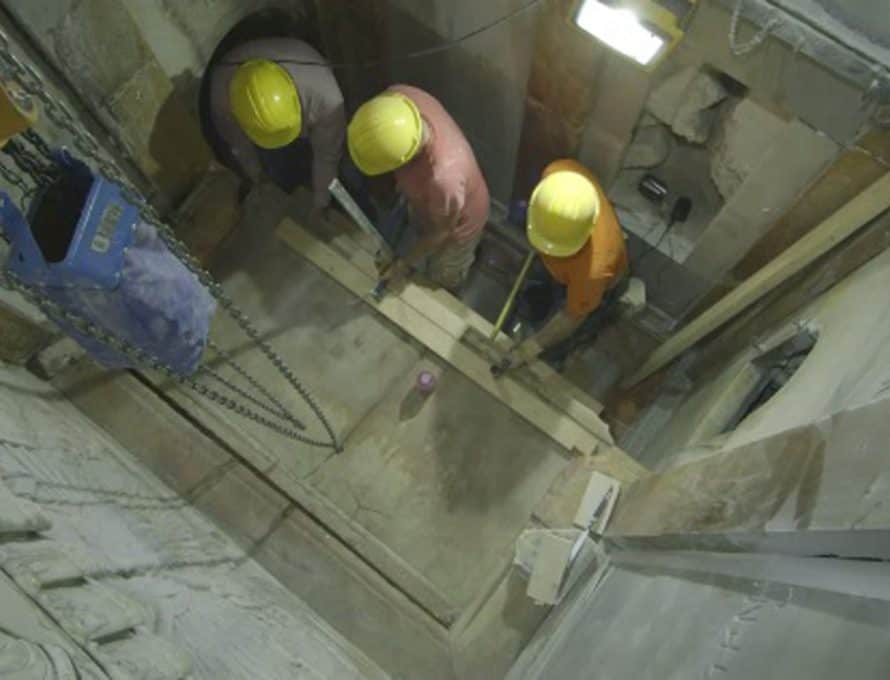 JERUSALEM – Archaeologists unearthed a limestone burial shelf on which some believe the body of Jesus was laid. The shelf has been covered since at least 1555. BP Photo

JERUSALEM (BP) – Archaeologists’ discovery of what may be the original burial bed on which Jesus’ body was laid have been deemed “hugely significant” by a Southern Baptist archaeologist.

The burial bed – which has not been studied by archaeologists previously – was unearthed Oct. 28 inside the Church of the Holy Sepulchre in Jerusalem, a site regarded by some as the burial place of Jesus, National Geographic reported. Two days earlier, researchers from the National Technical University of Athens removed marble cladding from the traditional burial site inside a shrine known as the Edicule and found only fill material inside.

But just before a 60-hour investigation period of the site was set to end, researchers exposed a second marble slab with a cross carved in its surface and lifted it to expose an ancient limestone burial bed. Investigation also confirmed the existence of limestone cave walls within the Edicule.

Upon discovering the bed, National Geographic archaeologist-in-residence Fredrik Hiebert said according to a video of the event, “I’m absolutely amazed. My knees are shaking a bit because I wasn’t expecting this.”

The burial bed had been sealed since at least 1555 and likely centuries earlier, according to National Geographic, to prevent visitors from chipping away pieces of the original rock as souvenirs. Last month’s uncovering occurred in conjunction with the Edicule’s first renovation in 200 years.

After the 60-hour investigation period ended, the tomb was resealed for the indefinite future.

Tom Davis, professor of archaeology and biblical backgrounds at Southwestern Baptist Theological Seminary, told Baptist Press uncovering the ancient burial bed is “hugely significant” because it “shows the survival of the original tomb despite the destruction” by Muslim invaders in 1009 of the original church built on the site.

“If enough survives,” Davis said in written comments, “we may be able to see the original first-century form of the tomb. Other first-century type tombs survive within the complex.”

Davis believes the Church of the Holy Sepulchre marks the burial site of Jesus for at least three reasons:

• In Jesus’ time, the site was a “quarry area outside the walls of Jerusalem,” and Jewish tradition forbade burial within the walls of a city.

• An alternate proposed site of Jesus’ burial known as the Garden Tomb “is an Iron Age tomb (8th c. B.C.)” and therefore cannot have been “a new tomb” in Jesus’ day “as the Scripture indicates.”

The Garden Tomb’s website states, “We never claim to be in the right place as we could never prove that; but where Jesus died is of little importance compared with why.”

• In the fourth century, the Roman emperor Constantine identified the site within what is now the Edicule as Jesus’ burial site.

Examination of any graffiti on the tomb walls documented before it was resealed could provide additional clues as to whether the specific burial bed uncovered was the actual resting place of Christ’s body before His resurrection, Davis said.

Researchers will continue analyzing data gathered from their exploration, National Geographic reported. But Davis said the archaeological venture should not affect Christians’ faith.

“The only real impact [would be] if we found His body there, which we will not,” he said.