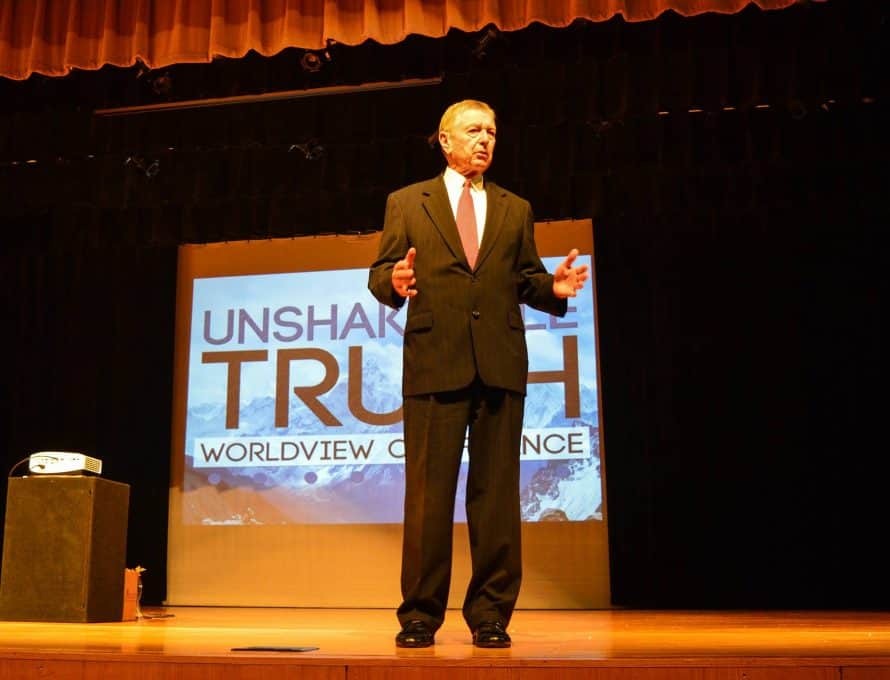 LEBANON – Christian leaders and scholars from across the nation shed light on the “Unshakeable Truth” of God’s Word during a worldview conference hosted by Heritage Baptist Church here, Oct. 15-16.

“The Bible speaks to every area of life, all the way from personal living to employment, families, churches, and our society at large,” Heritage Baptist Pastor Kevin Smith said. “We are trying to see the world as God would have us see it, through the lends of the Bible, and teach others to do the same.”

“We have seen God work from the beginning (of organizing the conference), and the process has been a great opportunity for like-minded believers to come together,” he added. “Hillcrest Baptist Church and Pastor David Brown have helped throughout, and we have invited churches throughout our association to take part in the conference.”

During the conference, Former Attorney General Ashcroft reminded his audience that “the primary job of government is to safeguard a gift of God”—namely, liberty.

“We think that if something is democratic, it was automatically free.

Ashcroft’s son and a Missouri state political candidate, Jay, also spoke during the conference, calling Christians to be “watchmen at the gate.” He based this call upon an analogy found in Ezekiel 33, where God calls the prophet a watchman responsible for warning a city of approaching enemies. In the same way, Christians should warn their society about the danger of abandoning God’s ways.

“The only hope for America I revival,” he said. “Our salvation is not coming from Washington.”

Terry Mortenson, a geologist from Answers in Genesis, addressed the debate about creation and evolution in 21st-century society, as well as discussing questions about the age of the earth and the worldwide flood described in Genesis.

“Adam and Eve were created supernaturally and were unique from all other creatures,” Mortenson said, adding that there is no “biblical basis of racism.”

“The Bible is crystal clear that there is only one race – Adam’s race.”

“If your home has been destroyed, go to the cross,” he said in a message on the foundations of marriage.

Rodney Reeves, dean of the Redford College of Theology and Ministry at Southwest Baptist University, urged conference participants to follow the example of the apostle Paul, who was willing to give up everything – including his own liberty – so as “to know (Christ) and the power of His resurrection” (Philippians 3).

Emir Caner, president of Truett McConnell University in Cleveland, Ga., challenged his audiences to do whatever it takes to show Muslims the way to Christ Jesus. According to Pew Research, he said, there will likely be 2.76 billion Muslims throughout the world in 2050, nearly double the 1.6 billion Muslims in 2010.

Christians don’t need to know everything about Islam to reach out to Muslims, Caner added. But they do need to know the gospel of Jesus Christ and sacrifice themselves to share that message with Muslims.

“That sacrifice,” he said, “could lead to a worldwide movement.”