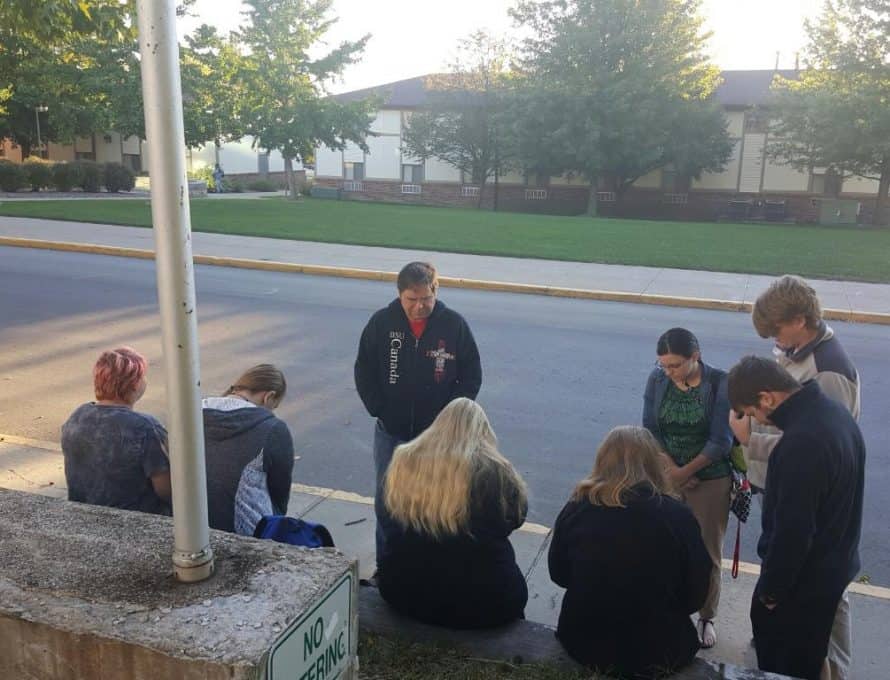 DE SOTO — Missouri Baptist youth and college students joined other believers around the nation, calling for a move of God within schools. More than a million across the U.S. and 63 other nations gathered around school flagpoles, Sept. 28, to pray.

The annual See You at the Pole (SYATP) was accompanied this year by the launch of the, “I Am Hope,” outreach. “I Am Hope” is an outreach program leading up to the Oct. 21 release of the film, “I’m Not Ashamed.” This film depicts the testimony of Rachel Joy Scott, a 17-year-old student shot to death in Columbine High School in 1999 after affirming her faith in Christ.

According to Marla Sproat, a member of First Baptist, Desloge, and Kindergarten teacher at Vineland Elementary School in De Soto, nearly 20 people met at the flagpole in front of her Kindergarten-6th grade school building for SYATP. But as people saw students at prayer, they asked what was going on and expressed interest in praying. As a result, nearly 48 students showed up to pray once again on Oct. 5.

“It was a great blessing to hear voices raised in prayer for our school,” Sproat said. “So many hurts and worries are carried into those school walls each day by our students. Some haven’t eaten, some don’t have a bed to sleep in. Some were called names and cussed out, and some had to get themselves up and out the door. Events such as SYATP provide an opportunity to come together and pray for those students in unity. It also shows the students in a tangible way that people care enough about them to petition God on their behalf.

“Teaching is a daunting task,” she added. “As educators, it is important that we pray for our students and coworkers and for God’s guidance as we silently witness to them through our attitudes and lifestyle.”

Sproat noted that another SYATP event is being planned at the school later in the year.

Nine university students also met for prayer at North Central Missouri College in Trenton, Sept. 28. And, according to Baptist Student Union (BSU) director Diann Barnes, their prayer was fruitful. During a student luncheon at noon, Sept. 28, an international student from Puerto Rico prayed to receive Christ as Lord over his life.

“It was very good – especially for college students that don’t have to get up and around until 9 a.m. or 10 a.m. for their first class of the day,” Barnes said.

“We’re convinced that nothing can be done without prayer,” she added. “When we can see and witness students who believe wholeheartedly that God will answer their prayer and that God is listening and that God yearns to have that communication with us—our campus can be transformed with those kinds of attitudes.”

Barnes also reported that one faculty member at the college, with tears in her eyes, expressed her gratitude that the BSU was committed to sharing the light of Jesus on campus. (This story includes reporting by Benjamin Hawkins and Kayla Rinker.)