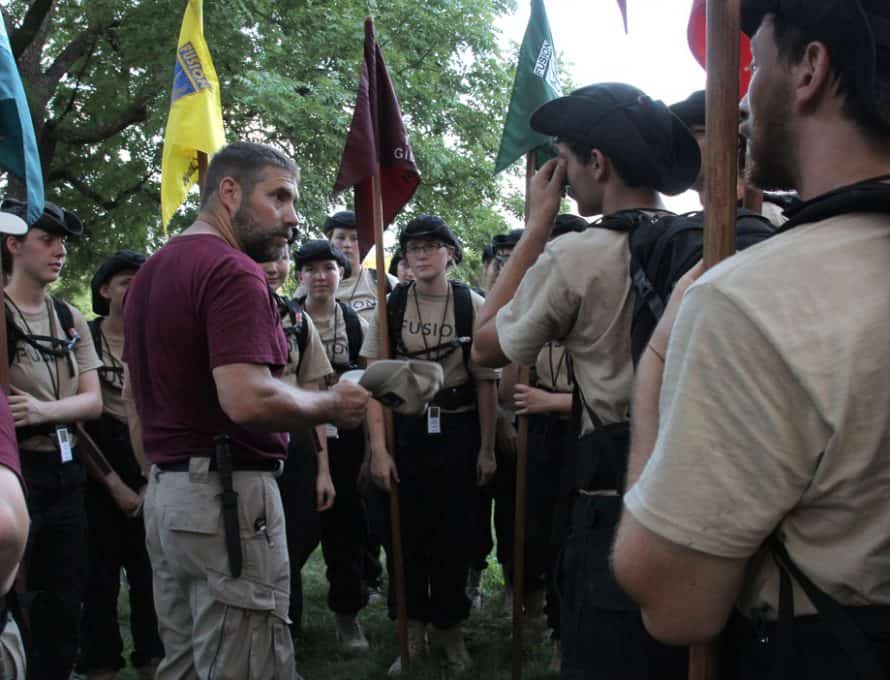 KANSAS CITY – Scott Brawner, founder and executive director of Fusion, coaches Fusion recruits during their Ground Training here, Aug. 1-14. The Fusion program, an intense missions training program for college students, was established and has its home at Midwestern Baptist Theological Seminary here and is now a prominent training program for the International Mission Board. Photo courtesy of Fusion.

KANSAS CITY – When they heard news of an emergency request put out by the International Mission Board (IMB), 19-year-old Sara Patterson* and her friend lived among a Bedouin people group who are scattered throughout the Middle East and North Africa

Patterson and her friend ventured to the Middle East/North Africa on their own in January 2016, travelling from village to village and sharing with people who had never heard the gospel before. But it was not Patterson’s first time to the region. A year earlier, she worked in the region with a group of college-aged girls deployed by Fusion, a missions-training program based on the campus of Midwestern Baptist Theological Seminary in Kansas City.

“Fusion is like nothing else,” Patterson said. “It will flip your world upside down.”

The program, she added, challenges young people to seriously consider the cost of following Christ and prepares them “for a lifetime of being enabled to go make disciples in any region.”

As such, after completing a year of training and mission work with Fusion, Patterson decided to go on mission independently, doing humanitarian work while sharing the gospel in Central Africa last fall, and then returning to the Middle East/North Africa this spring.

But then she heard about the IMB’s emergency call-out to Greece, where 156,000 refugees from countries like Syria and Iraq needed both humanitarian aid and a message of hope. They needed people proficient with Arabic and familiar with Muslim cultures. Patterson and her friend knew they needed to volunteer, so they were soon transferred to Greece, where they served in April and May—surrounded by hundreds of children without parents and by thousands of men and women who, without Christ had no hope.

When they left Greece in May, they left behind an underground church with 17 believers, Patterson said. And, once again on U.S. soil, they had opportunities to share with the U.S. Department of State about the mindset that women need to have while working among refugees as they had done.

This fall, Patterson returned to the campus of Midwestern Seminary, where she is serving as a Fusion advocate—that is, a team leader, who will lead a group of four or five other girls on global mission next spring.

“I’m thankful to the Lord for this opportunity to learn,” she said, adding that she never would have been able to follow God’s call to Central Africa, the Middle East and North Africa, or Greece, had she not gone through the Fusion program in late 2014 and early 2015.

“Fusion enabled me practically in a lot of ways,” she said. “It gave me confidence, resiliency,” and the realization that “I’m not called to comfort or success, but to obedience.

“That enables us to work in the tough places,” she added.

In early August, new Fusion recruits kicked off a semester of mission’s preparation during their ground school training. They were challenged to step into adulthood, enduring various physical, mental and spiritual tests—leading up to a final exercise, called “The Exodus.” During this 8-to-12-hour obstacle course, they worked with teammates—among other things—to climb a 10-foot wall, walk across rope bridges, swim across a pond, crawl under ropes through water and mud, and finally to climb up and over a large mud wall.

But the ground school training only begins a semester where Fusion recruits grow spiritually and learn languages, world religions, first aid (which is tested during a 36 mile, 2-day hike), as well as how to travel on their own and how to manage security issues overseas. Each team of four to five people live with one another throughout the semester and often spend evenings getting to know and sharing Christ with internationals living in the Kansas City area. Then, after their training is complete, they are deployed around the world for another semester.

And when this mission trip is complete, some – like Patterson – venture across the world to continue sharing the name of Christ where it has never been heard. But, for Patterson and others like her, this work is not about success, but about obedience and about honoring God.

“All that I want in life,” Patterson said, “is a life dependent on God.”

(Midwestern Seminary’s Fusion program, which has become a mainstay of the IMB, is just one of many educational opportunities available to Missouri Baptists through Midwestern Baptist Theological Seminary or the Missouri Baptist Convention’s two universities, Southwest Baptist University in Bolivar and Hannibal-LaGrange University in Hannibal.)